Thy Word: Why the Bible is a Guide 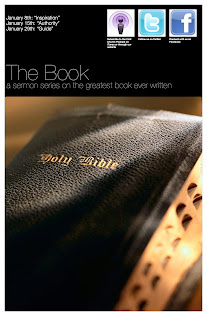 This week I am preaching the last in a three-part sermon series on the Bible.  As I've said, there is no way to plumb the depths and complexity of Holy Scripture in three sermons.  Which is why I set out to answer three very important questions.

For the previous two questions, visit here or here.

This week's question is "How is the Bible a guide for my life?"

There are lots of Christian-y people who claim that the Bible is the only guide for faith and life, but then seem to live their lives in ways that appear to contradict what the Bible teaches.

Then there are those who refuse to be guided by the Bible at all---preferring to be "led by the Spirit," which sometimes is shorthand for "doing whatever it is that I want to do."

In my denomination, the Presbyterian Church (USA) we say as part of ordination vows, that we promise to be "guided by Scripture."  But do any of us really know what that means?  If our lives are being guided by Scripture does it mean that we have to start living biblically---like literally?  There's some pretty strange stuff in the Bible, to be honest.  I mean, do we really need to start stoning adulterers or dkids who talk back to their parents?

Or is it something deeper?  Maybe when the Bible is the guide for your life, you discover that in the moments when you find yourself disoriented,  you know---just know--- there's a way through it.

Let me tell some stories...

I went scuba diving once.  I did the requisite training to get "resort" certified.  When when got to the dive location, I plunged over board just like I was taught and began breathing through my regulator as I began to make my way down.  I think I was about twenty feet under water when I suddenly panicked.  I felt like I couldn't breathe, the surface seemed like a mile away, and I began to freak out.  Just at that moment the dive master swam up and grabbed my hands.  He motioned for me to look into his eyes as I descended.  I fixed my gaze on his, and we went to the bottom together.

Once I found myself driving in the early morning hours before dawn in the middle of a dense fog.  I literally couldn't see a hundred feet in front of me.  I was petrified that I would miss a curve and find myself plummeting over a cliff---although there were no cliffs nearby, it was still a thought that raced through my head.  My hands were gripping the steering wheel so tight I thought that I would break it.  Then suddenly I saw two red tail lights in the distance. It was a car driving ahead of me.  The closer I got to the car, the more I realized that I could see the road better because it was in front of me.  I fell in about 50 yards behind my newfound guide and followed him.

I read an article this week about what it is like to fly an airplane in dense fog solely by instruments.  The article was written by someone who was commenting on the untimely and tragic death of JFK Jr, who crashed his small plane while flying in an incredibly dense fog near Martha's Vineyard.  The pilot said that it is so easy to become disoriented when you take your eyes off your instruments.  He related how he nearly crashed himself when he did just that and began banking his plane without even realizing it.  Relying on one's instruments, he affirmed, is the only way to get through it alive.

This is an interesting Psalm.  There are 22 sections that correspond to each letter of the Hebrew alphabet.  There are 8 lines per section, and there are 8 basic terms that appear throughout the Psalm repeatedly.  They are:  law, zdecree, statutes, commandments, ordinances, word, precepts and promise.

This tells us that this Psalm was meant to be read aloud to others or to oneself--like a poem---which it was.

This also tells us that it was meant to be memorized--the words were repeated and the way it was structured was designed for easier memorization.

It was also a declaration of faith in weakness.  The Psalm returns again and again to the idea that the singer is weak, helpless, falling apart, afraid, etc., but is going to lean hard on the veracity and reliability of Scripture for guidance.

Here's what I think about Psalm 119 in our own context:

It's a call for both obedience and faith.  It tells us that when we have faith to obey, our obedience gives us faith.  I know.  It doesn't seem to make sense, but it will.

I also think that this Psalm is a reminder that God's word is given, never possessed.  It isn't our words to manipulate as we wish.  This is God's word for us.

Along those lines, Psalm 119 tells us that God's word is authoritative because it is God's alone.  It doesn't need anything or anyone else to affirm it.

And Psalm 119 also tells us that Scripture is a revelation of God that must become part of us if we are to be guided by it.  (I talked about this last week)

So what does all this mean?

Here's the one thing I want to convey more than anything else:  When it comes to being guided by Scripture, We believe in order to understand.   Our belief comes first and then it seeks understanding.  If we seek to understand before we believe, we tend to "lean" on our own understanding.

Most Christians use the Bible as a means to support their already well-thought out and well-reasoned views on everything.  The believe because they find proof for what the believe in the text.  But if we are to genuinely be guided by Scripture, we need to believe first, and then let our belief guide us to understanding.

Someone may have a question at this point:  "So what you're saying is that I have to suspend disbelief when I read the Bible?"
The answer:  Yup.

This is not anti-intellectual or anti-scientific.  I am not asking anyone to check their brains at the door.

This is an invitation to certainty, light and trust.

The Bible is not a dead letter but a dynamic, living word.  You need to handle it with care.  You need to read it with an openness to the Holy Spirit---ready to be transformed and changed by it.  You need to be accosted by the Bible--willing to let it overwhelm your imagined strengths that are nothing but brokenness.

And here's something else, the Bible is meant to be "taken on the road."  It's not something that stays in the distant past.  The Psalm clearly bespeaks of a path, and of someone walking on it, led by the guiding light of Scripture.  It has a past, but it doesn't live there.  It is relevant for this path in this time.


I read this statistic this week:  Americans who say the Bible is the actual living word of God that should be used as a guide for our lives: 28%.  Ten year ago that statistic was 38%.


We are losing this one.  When people become disoriented, they don't even think twice about picking up Dr. Phil's latest tome, or tuning in to Dr. Oz.  They may even come to church, hoping to hear something uplifting.

When it comes to being guided by Scripture, we believe in order to understand.   And just like when I looked into the eyes of the dive master, when I saw the tail lights of the car on that foggy road, when the pilot focuses on his instruments rather than what he thinks he sees...  then we began to know.  We are not making it.  It is making us.