The Bible: Book of Rules or a Tasty Snack? 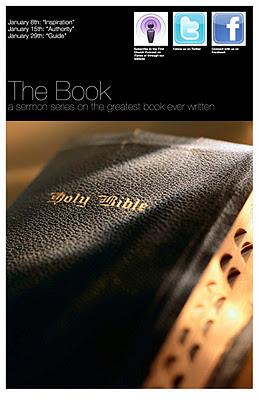 This Sunday I am continuing my sermon series on the Bible as we seek to answer this all important question: "What authority does the Bible have over my life?"

We used this text last week, which speaks right into the heart of what we'll be discussing this week: 2 Timothy 3:16-17

Last week I took a slightly different approach to answering questions of inspiration and the Bible.  Rather than turning the discussion into an apologetic exercise with big theological words and lots of footnotes, I simply encouraged the congregation to have inspirational encounters with Scripture.

If you think that's cheating, sue me.  Apologetic exercises with big theological words and lots of footnotes aren't really doing a very good job of convincing both Christians and unChristians alike that the Bible is the inspired word of God.  I figured that actually reading it, studying it, engaging it and letting it fall afresh on us might be a better way of "proving" inspiration.

So along those same lines, I want to take a different approach to answering the question I asked earlier: "What authority does the Bible have over my life?"

But first, let's talk about the Bible as a weapon.

When I was growing up in the fundamentalist Baptist world, we often referred to the Bible as the "Sword of the Lord."  Obviously we were speaking in metaphors, and drawing on the "sharper than any two-edged sword" imagery, but we did our best to take it up a notch from metaphor.  In the Christian culture I was raised, you were encouraged to use your Bible knowledge at the drop of a hat in any circumstance where someone needed some Scripture dropped down on them like a big old sword to the noggin.

So naturally we had "Sword Drills" to prepare.

A Sword Drill is where everyone in the room sits with their Bible in their lap.  The emcee will call out the name of a book in the Bible, a chapter and a verse.  When the signal is given, everyone grabs their Bible and turns as quickly as they can to the passage.  When they have it, they stand up.  The first one up wins.

I almost always won.  I was so fast on Sword Drills it boggled the mind.  Hey, it's not bragging if it's true.

If an evolutionist or Episcopal crossed my path, I would have been ready to throw down with them and drop some serious Scripture passages on them with blinding speed.  Atheists and feminists would have trembled in the presence of my lightning draw.

Interestingly enough, we were all being taught to be quick with Scripture, but not to spend time with it, savor it and let it live in us, so to speak.  Does it matter how quickly you can find a text, if you don't really own what you are reading?

There was this Guy I Knew Once (we've all had them in our lives), who had vast amounts of Scripture memorized.  He had a text for every moment.  If you made a statement, he would quote Scripture in response.  Question? Yup, he'd quote a text for you.  Sometimes out of the blue he would just spit out Scripture for no good reason.  It was unbelievably obnoxious, and so was he.  He took such pride in his abilities to have a quickly drawn two-edged sword, but he didn't actually take the time to be transformed by the Bible.

8 Then the voice that I had heard from heaven spoke to me once more: “Go, take the scroll that lies open in the hand of the angel who is standing on the sea and on the land.” 9 So I went to the angel and asked him to give me the little scroll. He said to me, “Take it and eat it. It will turn your stomach sour, but ‘in your mouth it will be as sweet as honey.’[a]” 10 I took the little scroll from the angel’s hand and ate it. It tasted as sweet as honey in my mouth, but when I had eaten it, my stomach turned sour. 11 Then I was told, “You must prophesy again about many peoples, nations, languages and kings.”

What does this mean?

It's about guts.  You know, innards... bowels... the stuff inside you that mysteriously makes your body work.  This is a moment when the prophet Ezekiel and John the Revelator show us what it means to make Scripture a part of oneself.

They are commanded to eat it.  And when they eat it, it changes them, becomes part of them, is absorbed by them.

It wasn't about being able to recite what was on the scroll word for word.  It was about knowing it, believing it, and feeling it.

Would you trust the recipe of a chef who never tasted his/her food?  Seriously, how would you feel if a chef deposited some food in front of you and said, "I just sort of came up with this.  I have no idea how it tastes.  I try to never taste my creations before I serve them."

This does not instill confidence, does it?  I mean it might be good.  I suppose a renowned chef could produce a recipe that he/she never tasted and it could be tasty.  But Culinary 101 establishes a very important guideline for chefs---you have to taste a dish before you serve it.  Or sell it.

What's the best thing you ever ate?

Do you have in your head what the best thing you ever ate might have been? 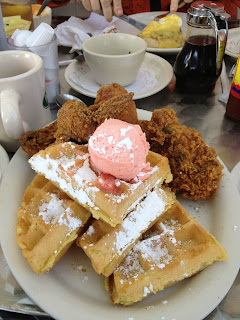 I can tell you exactly what mine was.  Here it is:
It's Chicken & Waffles from the Metro Diner in Jacksonville, Florida.

What you are seeing is perfectly fried chicken, unbelievably created waffles, a side of maple syrup mixed with hot sauce and topped with some heavenly strawberry butter. Oh, and powdered sugar.

Right now.  Right this second I am wishing that I could get in my car and drive to Jacksonville to eat this.

You can take my word for it that eating this is about the closest to Glory that you can get this side of Glory.  Because I ate it, and it was good, I want everyone to enjoy it, too.

When you consume something so good, so satisfying, so unbelievably good that you feel it down to your toes...

You share it.   You desire it again.  You never forget it.
It becomes a part of you.

Which is why I say that the authority of Scripture is an inward rather than an outward authority.  Because you are what you eat.  If you consume Scripture, you will absorb it, and if you absorb it it will become a part of you, and once that happens you are directed by it somehow.

The question was: "What authority does the Bible have over my life?"
The answer I am proposing is this:  "Does it taste good to you?"

You see, it's not about having a set of rules, laws, warnings and directives---although those things do exist inside the Bible.  But if that was the sum total of the message of the Bible it wouldn't be very tasty.

Here's a way to understand this better: When John the Revelator eats the scroll in Revelation, the angel tells him, "It's going to taste as sweet as honey in your mouth.... But it's going to make your stomach sour, pal."

It was a Maalox moment for the prophet.  Sometimes there are things in Scripture that might not sit well with us---things that are hard for us to hear.  But the taste is still sweet, because the WHOLE of the message is one of redemption, love and undeniable grace.

That Guy I Knew who spouted off Scripture in every moment didn't see the Bible as Chicken and Waffles.  He saw it as a hefty, old law book.  It's not.  It's Chicken and Waffles.  Or whatever the best thing you ever ate was.  The Bible wields authority over us when we consume it, absorb it and it becomes part of our very DNA.

It changes us then.  We find ourselves living by it not because we are afraid but because we feel it so deeply inside of us.  We discover that we desire it more and more, and can't stop thinking about it.

And we want everyone to sample it with us.