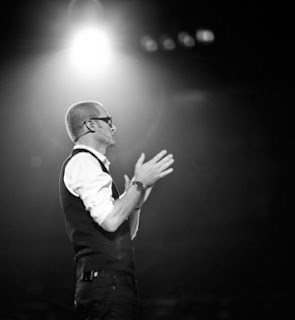 If you know anything about me at all, you know that I am kind of a Rob Bell fan.

I've written about him on my blog from time to time.

I confessed a man-crush here.

The first time I heard Rob preach was in 2002 at a Youth Specialties conference.  I sort of wept halfway through his sermon.  I had never heard anyone preach the way Rob preaches.  I still haven't.

For the past ten-plus years, Rob has been the teaching pastor at Mars Hill church in Grand Rapids, Michigan.

Rob made an announcement earlier this year that he would be leaving Mars Hill to pursue other kinds of ministry.


And on Sunday he preached his last sermon to the congregation he founded.

I am going to miss listening to the Mars Hill podcasts---at least the ones where Rob is preaching.  I hope Rob's leaving doesn't translate into a diminished ministry for Mars Hill---although it's probably inevitable to some extent.

I wanted to include some of the letter that Rob wrote to his congregation for his last sermon to them.  He read/preached this on Sunday.  If you've read Rob's books, or listened to him preach, you will understand why it's written the way it's written.

dear mars hiill,
to all the brothers and sisters of this church
to those who have been here from the beginning
who remember the old building, who braved that one?
ten foot wide hallways, clogged shoulder to shoulder
with people leaving the hangar to pick up their children
who had spent the previous hour packed into oxygen
deprived classrooms,
to those who hiked through the snow and slush and
mud that first day to sit on the floor
who idled in long traffic jams to listen to sermons from
the book of Leviticus on blood and guts and fire
and then to those of you who showed up for the first time
last week
to those who have complained for ten years that there's
no sign out front and heard me respond time and time again
'yes, but you found it'
to those who were baptized in that nearby lake in those
early days-especially those of you who were baptized that
one sunday when we didn't know that all of those
hundreds of fish had died earlier that week and washed
up on shore and so before you got baptized, you watched
in horror as your fellow church members wearing waders
collected the dead, rotting fish in black trash bags and cleared
out enough space for you to wade in and celebrate your new life-
and then to those of you who have been baptized in this room,
in an old former mall, standing here soaking wet, surrounded
by friends and family, cheered on by your tribe, not sure how
to put it in words but absolutely convinced that you in some
had tasted heaven on earth
to the young and to the old
to the hunters in your trucks who can't grill it if you don't kill it,
to the vegetarians in your prius'  wearing hemp underwear
to those on the right and those on the left
to the Dutch, and to the not much,
to Lions fans and to infidels,
to all of you wherever and however you find yourself-
whatever size, shape, color, perspective, history, and background
you bring to this gathering-
grace and peace to all of you on this day.

To read the rest of Rob's sermon visit it at THIS LINK.