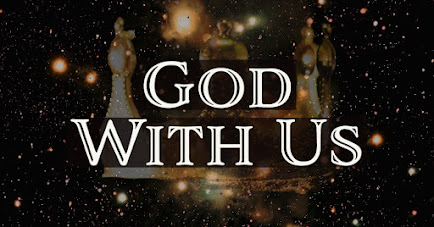 Today we're continuing our journey through the Season of Epiphany, which lasts until Lent.

But what does "Epiphany" mean, and why should we even care about this stuff anyway?

To begin with, "epiphany" is a word that essentially means "realization" or, more specifically, "inspired realization."  When you have an epiphany, you know it.  You feel it in your bones.

An epiphany is when you realize something that has the potential to change your life, the way you think about things, your future, and maybe your past... in other words, it's pretty momentous.

So why should we care about an entire season in the historical church traditions dedicated to having an epiphany?  It comes down to what it means concerning Jesus and, more specifically, what it means because of the Incarnation.

The Incarnation is the theology of God-With-Us, the idea that God took on human form and became one of us to rescue all of us.  And over the next several weeks, we'll learn why that is so important for you, me, and everyone.

It's essential to know where Epiphany's season is: sandwiched between Advent and Lent.  The pause between signs and wonders--between Nativity and Resurrection.

Which teaches us something about what it means to be a Christian.

This whole being a disciple of Jesus is about more than just Christmas and Easter, in other words.  Being a Christian means, you follow Jesus in and out of "season," so to speak--when it's easy... and when it's not so easy.

And we're going to learn today that God-With-Us helps us with this.

In fact, today, we're going to explore what it means to be chosen by God.

Let me ask you a question.  Would you ever dream of saying something like this to your kid or grandkid, niece, or nephew?

You're not special.  No matter what your U-9 soccer trophy that everyone got says, you're not special.  You're ordinary.  You'll most likely grow up to be ordinary, get a job, maybe get married if you can find someone who can put up with you, have some kids who will grow up to despise you for ruining their lives, and then settle into some kind of middle-aged malaise where the only thing you look forward to is a new season of British Bakeoff.

Of course, you wouldn't!  You want them to believe that they are the best things since sliced bread.  That they can do anything, accomplish anything.

Many of us were told these things when we were young, not all of us but many of us.  We were told by people we trusted that we were special and, that we could accomplish great things, that we were terrific.

So when did we stop believing it?  Do you believe that you are special?  That you are unique? How do we measure that?

I can't tell you how many times in my career as a pastor I've been told by church members, "I'm nothing special; I don't know how God could ever use me.  I'm ordinary. I'm a boring person. I've got nothing to offer."

And nothing could be further from the truth.  Because not only are every single one of us special and unique... we are chosen.

Today's passage of Scripture focuses on the calling of Jesus' disciples--a motley crew if there ever was one.  And we'll hear two of the most transformative words in the Bible:  Follow Me.

Here's what I want us to hold on to today:

WHEN GOD IS WITH US, WE KNOW WE ARE CHOSEN

Matthew 4:12 When Jesus heard that John had been put in prison, he withdrew to Galilee. 13 Leaving Nazareth, he went and lived in Capernaum, which was by the lake in the area of Zebulun and Naphtali— 14 to fulfill what was said through the prophet Isaiah:

15 “Land of Zebulun and land of Naphtali,

the Way of the Sea, beyond the Jordan,

Galilee of the Gentiles—

16 the people living in darkness

have seen a great light;

on those living in the land of the shadow of death

17 From that time on Jesus began to preach, “Repent, for the kingdom of heaven has come near.”

This little fishing village on the sea of Galilee became Jesus' hometown.  In fact, almost all of his ministry took place in a three-mile radius, what has been called "The Evangelical Triangle."  You can walk the entire space where Jesus preached, performed most of his miracles, and lived for a couple of hours.

18 As Jesus was walking beside the Sea of Galilee, he saw two brothers, Simon called Peter and his brother Andrew. They were casting a net into the lake, for they were fishermen. 19 “Come, follow me,” Jesus said, “and I will send you out to fish for people.” 20 At once they left their nets and followed him.

21 Going on from there, he saw two other brothers, James son of Zebedee and his brother John. They were in a boat with their father Zebedee, preparing their nets. Jesus called them, 22 and immediately they left the boat and their father and followed him.

The word used to describe how they respond is fascinating.  The Greek word here is "eutheos" or immediately. Still, it means they dropped everything and followed Jesus without hesitation, consulting anyone, getting an opinion, journalling about it, reading self-help books...

It has been said that Jesus summoned them with "irresistible authority," and they responded with "radical obedience."

23 Jesus went throughout Galilee, teaching in their synagogues, proclaiming the good news of the kingdom, and healing every disease and sickness among the people. 24 News about him spread all over Syria, and people brought to him all who were ill with various diseases, those suffering severe pain, the demon-possessed, those having seizures, and the paralyzed; and he healed them. 25 Large crowds from Galilee, the Decapolis, Jerusalem, Judea and the region across the Jordan followed him.

I need to say something about these people that Jesus called.  First, they were the religious school dropouts.  They never made it past high school, so to speak.  In those days, young boys would be taught the Torah, memorizing it, studying it, and learning it by heart.  If they showed an aptitude for learning, they advanced to the next level, and so on, until they could finally find a rabbi willing to let them be his disciple. Rabbis didn't go out seeking disciples.  They came to him.

Jesus wasn't like any other rabbi.  He not only went out to seek his disciples, he called the worst possible guys to follow him.  Unlearned, uneducated, un-everything.

For these men, it was almost as if they had been waiting all their lives to hear this voice, to hear this call.  And so they dropped everything and followed.

Who knows, maybe there was a moment after this where they went, "I can't believe what I just did... this is nuts.... what are we doing here?"

Which is why I love how this passage reads.  Immediately after calling his disciples, Jesus throws down some profound wisdom, healing, and straight-up miracles.

Things got very real for these new followers of Jesus--and all that they saw happen right after they dropped their nets and followed... confirmed it all: they had made the right choice.

If Jesus’ own disciples were chosen, why is it so hard for us to believe He would choose us?

How Do We Know We Are Chosen?
Because every piece of evidence we have in Scripture and Tradition tells us so.
Because we are created in the image of a God with us.
Because our stories prove it, even when we forget them.
Let me tell you a story...
WHEN GOD IS WITH US, WE KNOW WE ARE CHOSEN