The Words Of The Prophets - Week Two: Three Words That Can Save The World 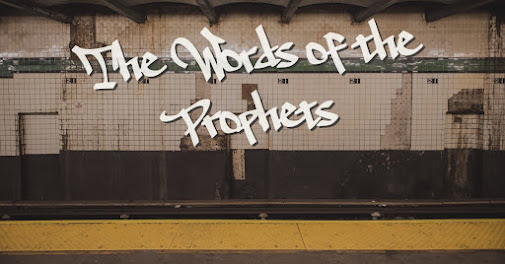 Today we're continuing our sermon series entitled "The Words Of The Prophets."

In the weeks leading up to Advent, we’ll be listening to the voices of the Old Testament prophets from the Lectionary readings as they prepare for the coming of the Messiah.

The inspiration for this series is a line from the classic song "The Sound of Silence" by Simon & Garfunkel.  The line goes like this:  The words of the prophets are written on the subway walls..."

Biblical prophets aren’t predictors of the future; they hope to shape it. They used their words to either project a hopeful future or one full of hardship---all based on what was happening at the moment.

And the words of the prophets can come to us from some unlikely places at times.

We just have to have our eyes open, our ears ready to hear, and our hearts ready to be transformed.

Prophetic imagination helps us see beyond our reality and God's reality.  We get glimpses of the coming Kingdom of God to see the world the way it ought to be, and we also get a vision of a Messiah.

Before we dig into the text, let's think briefly about the reality of the Church in our own era.

First the bad news:  What do most people who don't identify as Christians think of Christians?  Do you have any thoughts?

According to Barna Research:
Only 21% of people who don't identify as Christian have a positive view of the local church.  That stands in contrast to 80% of "practicing" Christians.
Only 50% of people who don't identify as Christian say they trust local pastors. As opposed to 85% of "practicing" Christians.
A majority of church-going Millenials and Gen Z believe the local church is detached from the real issues that people are facing.
We don't have to do things the way that we always did the.  There's an opportunity for new beginnings.  We have a chance to transcend and include.  Transcend the things that were not working and work even less, and include the things that are eternal, timeless, life-giving and vibrant.
But none of this is for the faint of heart.  We know this because we're all feeling it.  There's a lot of anxiety in our culture right now.  There's a lot of fear.
And the passage that we're going to be reading and studying today from the prophet Haggai from the Hebrew Scriptures helps us to see through the fog of uncertainty and also gives us the three words that can change the world.
What I want us to know is those three words can be our mantra as we step into the future that God is preparing for us:
THREE WORDS THAT CAN SAVE THE WORLD:  DO NOT FEAR
Before we read the passage today, let me tell you a little about the prophet we're reading.
Haggai was a prophet for the remnant—those who had been left behind.  After the Babylonian conquest of Israel, Jerusalem was left in ruins, and the Temple was destroyed. The shared trauma of all that loss was immense.
The people Haggai was prophesying to were the ones who had been left behind.  All of the artisans, artists, the very best and brightest so to speak had been taken away.  Those who were left must have felt the weight of that knowledge.
But it didn't take all that long for the people to rebuild their lives, and the city.  Although it was a different place, and a different way of being.
His concern is for the state of the Temple—we need to understand why.  The Temple had been the center of religious life, a sign of God’s presence.  The fact that it had been destroyed would have been unbelievably devastating.  Whatever they rebuilt was a shadow of what had been.
15b In the second year of King Darius, 2:1 on the twenty-first day of the seventh month, the word of the Lord came through the prophet Haggai: 2 “Speak to Zerubbabel son of Shealtiel, governor of Judah, to Joshua son of Jozadak,[a] the high priest, and to the remnant of the people. Ask them,
3 ‘Who of you is left who saw this house in its former glory? How does it look to you now? Does it not seem to you like nothing?
4 But now be strong, Zerubbabel,’ declares the Lord. ‘Be strong, Joshua son of Jozadak, the high priest. Be strong, all you people of the land,’ declares the Lord, ‘and work. For I am with you,’ declares the Lord Almighty. 5 ‘This is what I covenanted with you when you came out of Egypt. And my Spirit remains among you. Do not fear.’
6 “This is what the Lord Almighty says: ‘In a little while I will once more shake the heavens and the earth, the sea and the dry land. 7 I will shake all nations, and what is desired by all nations will come, and I will fill this house with glory,’ says the Lord Almighty.
8 ‘The silver is mine and the gold is mine,’ declares the Lord Almighty. 9 ‘The glory of this present house will be greater than the glory of the former house,’ says the Lord Almighty. ‘And in this place I will grant peace,’ declares the Lord Almighty.”
Before this passage, Haggai is decrying the state of the Temple as opposed to the "paneled houses" that many of the people are building.  They are more concerned with taking care of themselves than they are about the decay within their community, and the Temple becomes the sign and symbol of that decay.
You can tell that what some of the people are saying is something like this:
"God abandoned us.  We lost everything.  Why should we worry about spending our time, energy and resources on restoring a Temple that doesn't have a God in it."
God's answer in this passage is straight and to the point:  "God has not abandoned God's people.  The space belonged to God in the first place.  And God doesn't need a Temple to be present.  But the Temple is where God's people learned what it meant to be God's people.  It was a sign of their communal life, their worship, and obedience to be the people of God.
Haggai eventually will call for them to lean into the strength of mutuality and community, and to leave off focusing solely on themselves.
Then God says this:
‘The glory of this present house will be greater than the glory of the former house,’ says the Lord Almighty. ‘And in this place I will grant peace,’ declares the Lord Almighty.”
How can a place that is a shadow of what it once was have greater glory?
Because God wills it.  That's the answer.  The glory of the former Temple may have become synomous with Solomon's reign and the past glory of Israel in it's heyday.  But now the glory of the present house will outshine it's predecessor because the glory will be God's.
The remnant that Haggai is speaking to were undoubtedly filled with fear, which was what continued to motivate their actions, their reluctance to trust, their desire for safety and security for themselves as opposed to the well-being and flourishing of the community as a whole.

And so the prophet relates God's message to God's people:  Do Not Fear.
If those of us who call ourselves the Church abandon our fear, and trust that God will do what God always does—we’ll experience God like never before.
So what do we do with all of this?  How does this relate to our own context?
Because our new reality might seem as though it's not as glorious as the former reality, and when we look around us at the emerging world, it can fill us with fear and uncertainty.
Marks Of The “Faithful Fear-Less Remnant”
Know That What Was Doesn’t Define What Will Be—God is doing new things.
Return To The Basics—Christ has died, Christ is risen, Christ will come again
Community over Individuality—What unites us in our diversity
Faith over Fear—Not a political statement, or a rash belief; a reality
THREE WORDS THAT CAN SAVE THE WORLD: DO NOT FEAR