The Words Of The Prophets - Week Three: Your Dreams Are Too Small 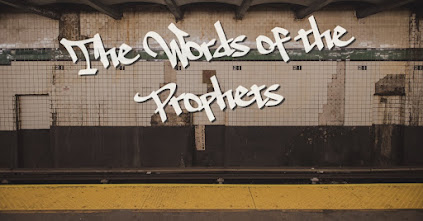 Today we're continuing the sermon series entitled "The Words Of The Prophets."

In the weeks leading up to Advent, we’ll be listening to the voices of the Old Testament prophets from the Lectionary readings as they prepare for the coming of the Messiah.

The inspiration for this series is a line from the classic song "The Sound of Silence" by Simon & Garfunkel.  The line goes like this:  The words of the prophets are written on the subway walls..."

Biblical prophets aren’t predictors of the future; they hope to shape it. They used their words to either project a hopeful future or one full of hardship---all based on what was happening at the moment.

And the words of the prophets can come to us from some unlikely places at times.

We just have to have our eyes open, our ears ready to hear, and our hearts ready to be transformed.

Prophetic imagination helps us see beyond our reality and God's reality.  We get glimpses of the coming Kingdom of God to see the world the way it ought to be, and we also get a vision of a Messiah.

Today we’re going to be hearing from a prophet who saw everything fall apart but never gave up on the big dreams God had given him.

If you could remake the world---what would it look like?

This past week, I found a conversation thread asking: What would your perfect world look like?" The answers that people gave were nothing short of amazing.  They ranged from the meta to the micro if you know what I mean.

Here are some images that answer that question...

What I'd like to do for a moment is just ask some of you if you have some words or phrases that would describe your perfect world.  You can shout them out.

Now let me ask you something:  What would it take to make those dreams of yours a reality?   Think deeply about it.  You might start listing some things in your head, like money, power, and influence, or you could just state what most people are already thinking... a miracle.

Our dreams for a new and better world are too big for us, aren't they?  At least that's the way it feels.

What if I told you that God has bigger dreams for the world than you or I could ever imagine?  And that God wants you and I to have a hand in making those too-big dreams a reality?

Here's what I want us to hold on to today as we prepare to dig into a passage from the Old Testament prophet Isaiah:

THE ONE WHO MAKES ALL THINGS NEW DOESN'T SETTLE FOR SMALL DREAMS.

Our passage of Scripture comes to us today from Isaiah 65:17-25.  We need to understand a little bit of this passage's context before exploring it.

17 “See, I will create
new heavens and a new earth.
The former things will not be remembered,
nor will they come to mind.
18 But be glad and rejoice forever
in what I will create,
for I will create Jerusalem to be a delight
and its people a joy.
19 I will rejoice over Jerusalem
and take delight in my people;
the sound of weeping and of crying
will be heard in it no more.
20 “Never again will there be in it
an infant who lives but a few days,
or an old man who does not live out his years;
the one who dies at a hundred
will be thought a mere child;
the one who fails to reach[a] a hundred
will be considered accursed.
21 They will build houses and dwell in them;
they will plant vineyards and eat their fruit.
22 No longer will they build houses and others live in them,
or plant and others eat.
For as the days of a tree,
so will be the days of my people;
my chosen ones will long enjoy
the work of their hands.
23 They will not labor in vain,
nor will they bear children doomed to misfortune;
for they will be a people blessed by the Lord,
they and their descendants with them.
24 Before they call I will answer;
while they are still speaking I will hear.
25 The wolf and the lamb will feed together,
and the lion will eat straw like the ox,
and dust will be the serpent’s food.
They will neither harm nor destroy
on all my holy mountain,”
says the Lord.
This prophet was working with the Remnant of people who had been left behind after the Babylonian Exile in the late 500s BCE.  They had gone through some incredible hardship and were faced with what seemed like hopeless odds.
This was an exploited group.  The city had no walls and therefore was indefensible, so the people who lived there were at the whim of whatever tribal leader in the area made nice with the Babylonians for control.
Children were dying of malnutrition.  The people's labor was being exploited.  They were busy building enormous homes for the Babylonian elite who were in or around the city, and the entire society lacked empathy---no one seemed to care about the plight of the other. The whole world seemed out of joint for everyone.
There were great divides between people in the aftermath of their shared trauma.  They had a hard time finding unity and an even harder time finding peace.
What is recognized in this text, what is read between the lines, is that God is acknowledging that the people need to speak and to be heard.  Their cries of distress deserve an answer, and the answer comes with a bold vision that is bound to make many of them shake their heads in disbelief.
This dream that God gives to God's people of a new world is too big to imagine.
But the word of God here comes down to a word- the word bara- the same word used in Genesis 1 for "create."  God will make things new, create a new world, a new place where whatever is wrong will be made right, and God's people along with it.
This situation nearly 3000 years ago is eerily reminiscent of our culture's problem, isn't it?  We've had all this shared trauma, and now we seem hopelessly divided while the significant issues of our day are not getting addressed.
And our hopes for a better world keep getting dashed.
The unspoken question in this passage is this:  How do we bridge the great gulfs between us to make a better world.  And the answer comes back from God: Dream big dreams.
Here's what we ultimately learn from this passage:
We can’t be afraid to dream bigger than we’ve ever dreamed before about what it takes to see God’s kingdom here on earth, and we also can’t be afraid to trust God to help us make them a reality.
So how do we make our too-big dreams of a new world a reality?
Courage—letting go of fear, which leads us to smallness
Discernment—using wisdom to distinguish truth from falsehood
THE ONE WHO MAKES ALL THINGS NEW DOESN’T SETTLE FOR SMALL DREAMS