Lessons From The Road - The Hardest Parable 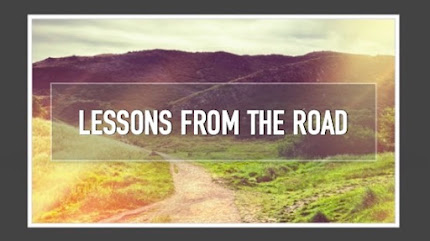 Today's sermon is one I prepared to preach several weeks ago as part of the little series I was doing entitled, "Lessons From The Road," but I decided to wait on it so we could do the "I'm All In!" series.

But I wanted to preach this sermon, so I'm super glad I get the chance before our next series, which will be pretty cool.

This sermon was inspired by a lesson I  learned about my need for control throughout my summer-long sabbatical.

There are so many things in life that we can't control--but that doesn't stop us from trying, does it?

I learned on the road this summer that I couldn't control much of anything, really...

I had issues with:

Weather - Thunderstorms are not all that fun to drive through.

Roadwork - It looks like that infrastructure money that most of the leaders in the southern states didn't vote for is funding A LOT OF ROAD WORK.

Detours - GPS can come in handy when detoured all over creation and back.

Road closures - what do you do when the road you thought would lead you to where you needed to go is completely shut down?

Bathroom breaks - Here's a pro tip.  Green tea is probably not something you want to drink a bunch of if you drive for any length of time.

Flights canceled - Airlines don't really care about us. Just so you know.

But there were moments of surrender when things changed for me.

Saying yes to the moments---My journey to Glasgow, and the realization that I was not in charge of anything except my response.

The Scripture today is one of the most challenging stories that Jesus told.  It's about how difficult it is for human beings to surrender in this life and the next.

Here's what I want us to hold on to:

UNTIL WE GIVE UP OUR NEED FOR CONTROL, WE'LL NEVER EXPERIENCE TRUE REST

19 “There was a rich man who was dressed in purple and fine linen and lived in luxury every day. 20 At his gate was laid a beggar named Lazarus, covered with sores 21 and longing to eat what fell from the rich man’s table. Even the dogs came and licked his sores.

The tradition of this story actually gives a name to this rich man, Dives, which is Latin for "Rich Man"

Some scholars believe that Jesus was taking a shot at the high priest here, a man named Caiaphas, who was known to wear purple and fine linen, and show off his wealth.

22 “The time came when the beggar died and the angels carried him to Abraham’s side. The rich man also died and was buried. 23 In Hades, where he was in torment, he looked up and saw Abraham far away, with Lazarus by his side. 24 So he called to him, ‘Father Abraham, have pity on me and send Lazarus to dip the tip of his finger in water and cool my tongue, because I am in agony in this fire.’

The name Lazarus may have been added at some point, or it may have been a morphed version of Eliezer, according to some scholars who believe Jesus may have used that name instead---Abraham's servant.

25 “But Abraham replied, ‘Son, remember that in your lifetime you received your good things, while Lazarus received bad things, but now he is comforted here and you are in agony. 26 And besides all this, between us and you a great chasm has been set in place, so that those who want to go from here to you cannot, nor can anyone cross over from there to us.’

27 “He answered, ‘Then I beg you, father, send Lazarus to my family, 28 for I have five brothers. Let him warn them, so that they will not also come to this place of torment.’

This is an interesting piece of the story here because Caiaphas had five brothers-in-law, all of whom took turns serving as High Priest.  This family was like the Sopranos or the Corleones of Jerusalem.

29 “Abraham replied, ‘They have Moses and the Prophets; let them listen to them.’

30 “‘No, father Abraham,’ he said, ‘but if someone from the dead goes to them, they will repent.’

31 “He said to him, ‘If they do not listen to Moses and the Prophets, they will not be convinced even if someone rises from the dead.’”

Here we have Jesus foreshadowing the Resurrection, of course. This part of the story has often been used in anti-Semitic rhetoric throughout the centuries, but there were followers of Jesus, who struggled to believe that he had really been raised from the dead.

Let's break down some more stuff about this story:

Here's what it isn't:  A true story, A map of Hell (Luther affirms this), A plan of "Salvation."

Here's what it is:  A parable, A reflection of beliefs in the 1st Century, A way of finding peace in this life--and the next.

Ancient Jewish beliefs are mixed with Greek mythology here, along with rabbinical wisdom helping. What we see here reflects the old Jewish idea that there was a place and a period of refinement where people had a chance to repent, surrender, etc.

The irony is that if the Rich Man can do any of that, he'd find his way across the great gulf to Abraham's bosom.

When you try to make this anything other than a story--it loses its power.  And this is powerful.  People get so hung up on seeking to make this fact that they miss the truth.

Jesus is demonstrating here that even after death, the rich man refuses to relinquish giving orders and remaining in control.  He orders Abraham to have Lazarus come and serve him.  He wants Abraham to send him back to testify to his brothers.  He does everything except the thing that will get him across the divide.

And then there is that last line that Jesus levels at the crowd---" neither will they be persuaded."  Meaning that the Rich Man's brothers are just like him.  Even someone who was raised from the dead wouldn't convince them.  They'd try to discount, control, and hide it somehow, which is precisely what happened.

What Jesus is trying to teach here is simply this:

We will only find proper eternal rest when we allow ourselves to be refined by God's grace and surrender to the Way that leads to life.

My Visit to Hearst Castle:

Hearst was the most powerful man on earth at the time.  He controlled virtually every form of media that existed.  He even bragged about how he got the U.S. into the Spanish-American War.

And he built a home that reflected his need for control. Made and rebuilt, seemingly on a whim.  Tearing things apart, changing his mind... Controlled who was there, how they acted, directed his companies... everything was about control.

In the end, he died having experienced the loss of his control, people moving on to newer media, losing his influence,

As I reflected on all of this in my cottage at the monastery, I realized just how, like the Rich Man, I have been in my life.  So many of us live this way.

We may not have the wealth or the influence, but we manipulate what we do have to hold the wheel instead of letting Jesus take it.

So how do we learn to do this better?

1.  Relinquish Attachments--are you really in control or being controlled?

2. Surrender to Refinement--let yourself be refined by the circumstances or struggles you find yourself in.  It's painful but purposeful.

3. Trust the Outcomes to God--perhaps God knows what God is doing.  God doesn't cause all things but is present in all things.

UNTIL WE GIVE UP OUR NEED FOR CONTROL, WE'LL NEVER EXPERIENCE TRUE REST.