All In - Week Four: Invested 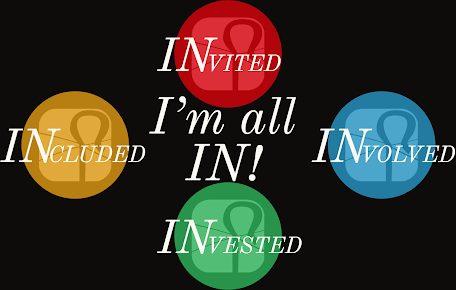 Today we're going to be concluding the series that we started four weeks ago entitled "I'm All In!"  This series has helped us see more clearly how we can live an "all-in" kind of life as we seek to follow Jesus together.

As I revealed last week, we've been leading up to some things with this sermon series---today is the day when we're going to be challenging our members and friends to get involved, and invested with your time and talent.

Next week, we'll be asking everyone to go all-in with their financial commitments as we join together to lay the foundation for the incredible growth as a family of faith that I just know we're going to experience this year.  Growth in numbers, sure... but also growth in faith, hope, and love.

Today's lesson is all about intentions, and how when they don't match our actions--things can go wrong for us in all kinds of ways.

I'm going to say something really smart right now.  I didn't say it first, which is what makes it really smart.   But I feel like it's kind of smart for me to use it.  I'll stop while I'm ahead.

Pastor Andy Stanley once wrote an entire book called the Principle of the Path.  In this book he said this:  It's your direction, not your intention that determines your destination.

Let me put it another way.  It's simple geometry, really.  No matter where you fix your sights on the horizon at a fixed point you want to reach, if your body gets pointed away ever so slightly from that point, you'll eventually find yourself miles away from it.

All of our good intentions will play second fiddle to our actions.  And all it takes is for our actions to take us off course and we end up arriving in places that we never intended.

Think about it.  If you are flying from LAX to New York, all you need is a mistake of 3.5 degrees south as you start off and you'll end up in DC. And who wants to go there, man?

So here's the thing, I'm preaching today from a passage that you kind of never preach on when it comes to generosity---but it speaks directly to my main point, and here's a confession:  I've always wanted to preach on this passage during pledge season and you'll see why here in a moment.

This is what I want us to hold on to this week:

The story that we're going to read today actually starts off in Acts 4 with this passage:

32 All the believers were one in heart and mind. No one claimed that any of their possessions was their own, but they shared everything they had. 33 With great power the apostles continued to testify to the resurrection of the Lord Jesus. And God’s grace was so powerfully at work in them all 34 that there were no needy persons among them. For from time to time those who owned land or houses sold them, brought the money from the sales 35 and put it at the apostles’ feet, and it was distributed to anyone who had need.

36 Joseph, a Levite from Cyprus, whom the apostles called Barnabas (which means “son of encouragement”), 37 sold a field he owned and brought the money and put it at the apostles’ feet.

So all of this is going on, and everyone's sharing everything they have with one another, and then this guy Barnabas sells a piece of property, and then brings the entire proceeds to the apostles.

This brings us to the next chapter and to the story of Ananias and Sapphira.

5 Now a man named Ananias, together with his wife Sapphira, also sold a piece of property. 2 With his wife’s full knowledge he kept back part of the money for himself, but brought the rest and put it at the apostles’ feet.

3 Then Peter said, “Ananias, how is it that Satan has so filled your heart that you have lied to the Holy Spirit and have kept for yourself some of the money you received for the land? 4 Didn’t it belong to you before it was sold? And after it was sold, wasn’t the money at your disposal? What made you think of doing such a thing? You have not lied just to human beings but to God.”

5 When Ananias heard this, he fell down and died. And great fear seized all who heard what had happened. 6 Then some young men came forward, wrapped up his body, and carried him out and buried him.

7 About three hours later his wife came in, not knowing what had happened. 8 Peter asked her, “Tell me, is this the price you and Ananias got for the land?”

9 Peter said to her, “How could you conspire to test the Spirit of the Lord? Listen! The feet of the men who buried your husband are at the door, and they will carry you out also.”

10 At that moment she fell down at his feet and died. Then the young men came in and, finding her dead, carried her out and buried her beside her husband. 11 Great fear seized the whole church and all who heard about these events.

In some translations of the Scripture, the chapter starts off with the word "But..." this is the contrast with what Barnabas did, in other words.

So here's the big question:  Did this really happen?  Did God really strike these people dead?  I mean that sounds kind of awful, am I right?

The book of Acts is essentially a retelling of the story of the people of God from the beginning of all things through the Old Testament and the Exodus of the Hebrew people from slavery and their conquest of the Promised Land.

This story connects with the story of Achan in Joshua chapter 7.  Achan "held back" from God by stealing gold and other things from the wreckage of Jericho, which ended up cursing the rest of the people.  When he's found out, the earth swallows him, his family, livestock, tents, everything.

This story of Ananias and Sapphira was obviously widely told because Luke the author of the book of Acts heard it, and it fits neatly into his narrative and belief that there's a trajectory for the Early Church.

Their intentions did not match their actions and it turned out to be deadly however you choose to read the passage.

What we learn from this strange story is something very important:  God's not satisfied with cursory, symbolic gestures.  God wants our inside to match our outside--both acting as an expression of generosity.

So what do we do with all of this?

There are two questions that we need to ask of ourselves when it comes to being invested, and working toward congruence in our lives, where our inside matches our outside, where our intentions and actions line up properly.

1.  What can I possibly give to the One who has given me everything?  How grateful are you?  How much do you waste on things that don't matter?

2.  How can my best intentions be expressed by my actions?  The first step is the most important step.  What will your first step be?  The next step you take is vital, so make sure it's a good one.

WE'RE ALL IN WHEN OUR BEST INTENTIONS ARE EQUAL TO OUR ACTIONS.