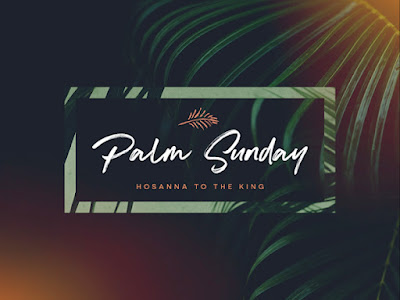 Today is Palm Sunday, the end of the season of Lent, and the beginning of Holy Week.  We are just a few short days away from Easter, can I get a witness?

This year we're doing something a bit different for Palm Sunday, as you have already noticed, I'm sure.

We're letting the story guide our worship service--reminding us of the story of Jesus during his week of Passion---the triumphal entry into Jerusalem, his last supper with his followers, and then... the shadows that fall after.

It's also the last mention that we'll make of the sermon series that we've been working through together entitled Return To Me.

This is the moment when all of our talk of repentance gets put to the test as we have Resurrection Day within our sights, and we are ready to be there, to celebrate, to put on our bright Easter finery, have dinner with the family, let our little ones hunt for eggs and all the rest of it.

If this Lenten season seemed long---you may want to skip to the good part.

Easter is right there after all.  Let's just get to it, am I  right?

But before we get to Resurrection, we have to face the shadows of death first.  It's part of the cosmic cycle of dying and rising, and there can be no Empty Tomb without the Cross before it.

If this seems a rather grim thing to ponder, consider this:

No renowned artist, no Grammy-winning musician or band, no championship sports team ever said of their crowning achievements... "It was all so easy... right from the start, everything just happened."

There are no real "overnight successes."  There were hours of practice, work, hardship, rejections, defeats, failures, and dark nights of the soul that happened long before the moment of triumph.

You simply can't have Easter without Holy Week.

And yes, "the shadow always proves the sunshine," but the shadow still has to be reckoned with.

This is why our last conversation about repentance for the season of Lent needs to happen today, and we need to hold on to this one crucial idea:

The passage of Scripture that we're going to be focusing on today is the story of Jesus' triumphal entry into Jerusalem, and the expectations that were placed on him by people who desperately wanted a Savior... people like us, who longed to be saved, just in the way that they felt like they should be saved.

1 As they approached Jerusalem and came to Bethphage on the Mount of Olives, Jesus sent two disciples, 2 saying to them, “Go to the village ahead of you, and at once you will find a donkey tied there, with her colt by her. Untie them and bring them to me. 3 If anyone says anything to you, say that the Lord needs them, and he will send them right away.”

‘See, your king comes to you,

gentle and riding on a donkey,

“Hosanna to the Son of David!”

“Blessed is he who comes in the name of the Lord!”

“Hosanna in the highest heaven!”

This was a short-lived celebration because the expectations of the people who were celebrating were far too low.

It's obvious it was planned--but for what reason?  What was Jesus trying to do here?

Donkey--a sign of peace and a fulfillment of a prophecy from Zechariah about what the true king would look like.

Contrast with Pilate's procession into Jerusalem for sure... but there was more. There was a song that was being referenced as the people were shouting their praises:

15 Shouts of joy and victory

resound in the tents of the righteous:

and will proclaim what the Lord has done.

18 The Lord has chastened me severely,

but he has not given me over to death.

19 Open for me the gates of the righteous;

I will enter and give thanks to the Lord.

20 This is the gate of the Lord

through which the righteous may enter.

21 I will give you thanks, for you answered me;

you have become my salvation.

22 The stone the builders rejected

has become the cornerstone;

and it is marvelous in our eyes.

24 The Lord has done it this very day;

let us rejoice today and be glad.

So what were these people really saying when they shouted "Hosanna!"  They were saying, "Save us now!"  They were offering up a plea in the midst of their celebration, a plea that God would save them from the growing shadows in their world.

We understand these people more than you might think...

It's true, their world was falling apart around them.  They had been betrayed by their leaders, by religious institutions by their own people.  They wanted a Savior.

So they shouted "Hosanna!" "Blessed is the One Who Saves!"  "Save Us Now!"

But Jesus had another kind of blessing to give them and they couldn't understand it.  The blessing that Jesus had to offer was one that he would give with his life.  With the crowd noise in his ears, with the shouts of praise, with the pleas for salvation ringing all around him...

"Blessed are the broken."

And you and I ---we are with them.  We want Easter without Good Friday.  We want to be saved, but without the sacrifice that it takes to experience it.  We want our brokenness to be fixed, but we don't even know just how much love it takes to do that because it's beyond our imagination.

This is why we need to step into the shadows today and begin our journey of following Jesus from the triumphal entry, to the table he set for his disciples, to the Cross, and then... and only then to the glory of Resurrection.

Blessed are the broken...