Fifth Sunday of Lent - Return To Me: Pressing On 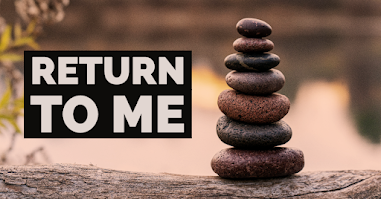 Today is the Fifth Sunday of the Season of Lent, and also the fifth and final installment of our sermon series, Return To Me.

This series is inspired by a phrase that is found throughout the Hebrew Scriptures--a phrase that is closely connected to repentance but is also much deeper and all-encompassing than mere penitence.

The key verse for our particular journey, however, comes from Joel 2:12-13, which reads:

12“Yet even now,” declares the LORD, “return to Me with all your heart, with fasting, weeping, and mourning.” 13 So rend your hearts and not your garments, and return to the LORD your God. For He is gracious and compassionate, slow to anger, abounding in loving devotion.

I've always been moved by this passage, mostly because of the way verse 13 starts off, "So rend your hearts and not your garments."  In other words, don't go through a big show of your piety, when your heart still might not be in the right place.

And so this series will help us retrace our steps back to faithfulness, and enable us to discover the meaning of true repentance for the things we've done and left undone that have strained our relationship with God and others.

Have you ever met someone who suffered from I-Coulda-Been-A-Contender Syndrome?

Let me explain a bit about that reference.  It comes from the classic film On The Waterfront starring Marlon Brando, a promising young boxer who is convinced by his brother to throw a fight in order for a mob boss to fix the match, and make some money.

This quote used to be used more often than it is now, but still.  It's the thing or something like it that people say when they believe they were at their best at one point when they were younger perhaps, but those days are gone.

Some things are a stereotype for a reason.

Once when I got injured when I was coaching my son's football team, my wife reminded me of a saying we have in our family: Your mind was writing checks, your body couldn't cash.

And if all that wasn't enough to make the point, let me reframe this a bit for the younger folk in the crowd.  This can also be called Uncle Rico Syndrome, as well.

Uncle Rico is the character in Napoleon Dynamite, who does very little except dream about the glory of his high school days.

This is my favorite Uncle Rico quote:

How much you wanna make a bet I can throw a football over them mountains?... Yeah... Coach woulda put me in fourth quarter, we would've been state champions. No doubt. No doubt in my mind.