Signs Of The Times - Week One: Because The Time Is Near 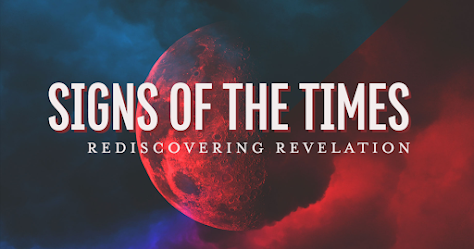 Today we are going to be launching a brand new sermon series entitled Signs of the Times: Rediscovering Revelation---a study of perhaps the most mysterious and misunderstood book of the Bible, the book of Revelation.

It seems like every time we face challenges as a society… or when there are natural disasters… or conflict between nations… or a pandemic… there are always people who claim that it’s the end of the world, that the “prophecies” in the Bible are going to be fulfilled and Jesus is going to return.

But what if those “prophecies” really weren’t prophecies at all?  What if the words in the book of Revelation were meant to provide comfort and courage to people who are striving to follow Jesus, and were not meant as predictions at all?

All through the month of January and leading up to the season of Lent, we’ll be studying the book of Revelation, one of the most misunderstood and misinterpreted books of the Bible. We’ll learn together that the “signs of the times” can be filled with surprises of hope and joy.

Let me ask you a question... How do you know when it's the end of the world?

You could look for signs, I suppose.  I did just that over the internets this past week, and here are a few things I found:

I mentioned a couple of weeks ago that there are more and more so-called Christian prophets now than ever before.

I mean we've always had these kinds of folks--you could find them by perusing the backwater forms of media--- public access television broadcasts, AM radio, and the like.

When I was a kid in the fundamentalist Baptist church we would have these guys come to preach revivals at our church for several days in a row.  They would make predictions about the end of the world and then sell their cassette taped sermons and Bible studies.

There was one guy named Darrell Dunn, who came to hawk his wares at our church for a solid week.  This was around 1980, and he claimed--based on a bunch of convoluted numerology from the book of Revelation--that the Second Coming of Jesus was going to happen in 1984.

I looked this guy up a few years ago, and he was still at it---making predictions and shilling his products.

But then things kind of exploded with the advent of cable television, then the internet, then social media... and now they are everywhere, and these people always seem to find a following no matter how big of a crackpot they happen to be.

The problem with all of these modern prophets is that they don't understand the first thing about ancient apocalyptic literature, and have never read Revelation within its context of the first century---and even when they have, they've misconstrued it.

All of this belies a very important fact, though:  People have been and continue to be fascinated with the book of Revelation.  Its mystery and fantastic imagery capture the imagination.

There's a seven-headed dragon... fantastic beasts... heroic divine beings... a cosmic battle between good and evil...  and just when you think that it's going to be the end of the world and everything is over... the book takes a turn where grace abounds, all things are made new, peace reigns...

Here are a few of the cultural influences that Revelation has had on our culture...

Betcha some of those examples caught you by surprise, right?

Revelation is primarily concerned with two things:  The problem of evil and the nature of hope.  These are very human questions to ask.  But they aren't so much problems to be solved as mysteries to be explored.

Here's what I want us to hold on to today...

THERE IS NO FUTURE WITHOUT GOD'S GRACE AND THERE IS NO END WITHOUT A NEW BEGINNING.

We're going to start things off by reading the first few verses of Revelation:

To the seven churches in the province of Asia:

Grace and peace to you from him who is, and who was, and who is to come, and from the seven spirits[a] before his throne, 5 and from Jesus Christ, who is the faithful witness, the firstborn from the dead, and the ruler of the kings of the earth.

To him who loves us and has freed us from our sins by his blood, 6 and has made us to be a kingdom and priests to serve his God and Father—to him be glory and power forever and ever! Amen.

7 “Look, he is coming with the clouds,”[b]
and “every eye will see him,
even those who pierced him”;
and all peoples on earth “will mourn because of him.”[c]
So shall it be! Amen.
8 “I am the Alpha and the Omega,” says the Lord God, “who is, and who was, and who is to come, the Almighty.”

Why is any of this important?  Because we are talking about real places, real people, real challenges that were being faced by these first-century Christians, who were trying to forge a new community that was unlike any other at the time... and they were facing persecution, pressures to assimilate to the culture of the Roman Empire, and a host of other things.

Some of the images that John the Revelator used in his narrative are pointedly political---the Beast (Nero), Dragon (Rome), Harlot (Babylon)... to name a few.

Revelation was never meant to be a coded collection of secrets--it was an open book, well-understood by the people who were reading it.

Interestingly, Evangelical Christians for the most part tend to dwell on the parts of Revelation that support their doctrines regarding the end times and tend to see it as predictive.

Mainline Christians tend to gloss over the strange parts and only focus on the high points where everything is awesome.

But Revelation is meant to unmask false senses of security, and to invite the reader to join in the joyous celebration of God's great story of redemption and resurrection.

As we read Revelation we need to understand some things, and I'm going to end with this:

Apocalyptic Tradition—highlights the conflict between forces of good and evil

Contextual & Timeless—written for a moment, but lessons for all times