Signs of The Times - Week 3: Breaking The Seals 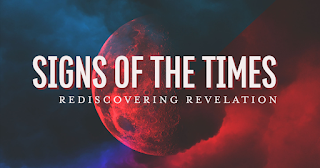 Today we are continuing the sermon series that we started a couple of weeks ago, a series entitled Signs of the Times: Rediscovering Revelation.

We have been studying one of the most controversial, misunderstood, and misinterpreted books of the Bible, the book of Revelation.  And the timing of this study couldn't be more perfect, am I right?

Some of the things that people will often share with me when they talk about the book of Revelation is that they are scared of it, that they don't understand it, that it uses some pretty messed up imagery, and that they often have friends or family members who like to point to it when they think the world is coming to an end.

In other words, it doesn't give anyone the "warm and fuzzies."

Today we're actually going to be exploring some of the most dramatic visions that are found in the book of Revelation, and we're also going to learn what it means to find meaning in the middle of calamity, which I am sure will be good news for most of us.

Since we mentioned calamity, let me just say a few things about what happens to most of us when we experience it.

I call this part of the sermon:  Feeling Sorry For Yourself: A Primer

So when we go through something traumatic, or we experience challenges like--I don't know--a pandemic, or a winter storm that shuts down everything and we're forced to boil snow to cook pasta or flush our toilets... what do we often do to cope with these things as we're feeling sorry for ourselves?

Here's a few things that I do when I'm feeling sorry for myself, maybe you can relate:

3. Go on social media to find people worse off

4. Text friends and tell them all the hardships I'm going through.

Feel free to share your own coping mechanisms.  You can shout them out loud if you want. We're all friends here.

Here's the thing, when we experience calamity, at the heart of our self-pity, moping, occasional rants, or even our attempts to put our heads in the sand and act like nothing is wrong is one desire that unites all of us, despite our different ways of dealing with it:

What we want most of all is meaning when there is a calamity.  We want to make sense of it all, and we'll often do whatever it takes to get there even if it means betraying our truest and best selves to do it.

Even if it means putting our trust in things, people, and public figures that are ultimately untrustworthy.

John the Revelator made a conscious decision to share a vision made of word pictures that called early Christians to faithfulness and trust in God.

He didn't want them turning to the false gods of earthly safety, security, strength, and success because to do so would be a denial of the great work that God had begun in them through Jesus--a great work that included glorious purpose.

In fact, our takeaway today speaks directly into what John intended.  Here's what I want us to hang on to today: