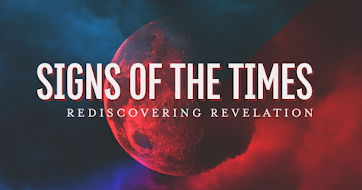 Today we're going to continue our sermon series entitled Signs of the Times: Rediscovering Revelation as we explore one of the most mysterious and probably the most misunderstood and misinterpreted book of the entire Bible: The book of Revelation.

We are living through perhaps one of the challenging and interesting times in history right now, and if you are trying to look around for signs and symbols of the end of the world, you'll be kept busy.

The vast majority of Christians are divided over just how to figure all of this out.

Some believe that we are just counting time down like a doomsday clock until all of the prophecies that they believe are in Revelation and other apocalyptic books in the Bible are fulfilled,  Jesus returns, the Rapture happens and all hell breaks loose.

There are others of us who see the book of Revelation not as a code to be cracked to figure out the timing of the end of everything, but as a hope-filled vision of how to hold on to your faith during trying times---even when it seems like all is lost.

But back to the whole looking for signs of the times... it's hard to sort through all of the signs and symbols of the news that comes at us from a hundred different directions.

I've come to believe that the whole no news route is definitely the way to go if you want to keep from losing your mind just about every single day.  Because this is the kind of stuff that you get when you pay attention to the news:

King James I--the king of England who commissioned the whole King James version of the Bible--once said: "No newis is better than eville newis."

How do you know what's good news, or bad news?  What's better?  Fake news or no news at all?

News infiltrates our subconscious and our dreams.

And how we take in news is directly affected by our social location.

I got to thinking this week about how different people can hear something that seems so incredibly ridiculous by any stretch of the imagination, and still believe it.  It really comes down to social location.

Social location is defined this way:

Social location affects our ideas, beliefs, and the way we take in new information. While I do believe that each of us has free will, I do also believe that there are a lot of things that we seemingly have no control over, because of our social location.

And when social location is manipulated by the attention merchants--it's a mess.

John the Revelator understood that his visions were sure to be good news for some and not for others.  He was writing to seven different churches, some of whom were affluent and largely spared from the struggles and persecutions of others.

Some were comfortable with Roman culture and saw no problem with conflating their newfound Christian beliefs with Roman patriotism and religion.  Others resisted assimilating to Roman culture with all their might.

Today we're going to catch a glimpse of John's vision of heaven--a vision that would not have been received the same by every church he was addressing.

And we're also going to learn something very important about the Gospel--the Good News of Jesus Christ...

THE GOSPEL COMFORTS THE AFFLICTED AND AFFLICTS THE COMFORTABLE

4 After this I looked, and there before me was a door standing open in heaven. And the voice I had first heard speaking to me like a trumpet said, “Come up here, and I will show you what must take place after this.” 2 At once I was in the Spirit, and there before me was a throne in heaven with someone sitting on it... 4 Surrounding the throne were twenty-four other thrones, and seated on them were twenty-four elders. They were dressed in white and had crowns of gold on their heads...

is the Lord God Almighty,’[b]

to receive glory and honor and power,

for you created all things,

and by your will they were created

and have their being.”

6 Then I saw a Lamb, looking as if it had been slain, standing at the center of the throne, encircled by the four living creatures and the elders. The Lamb had seven horns and seven eyes, which are the seven spirits[a] of God sent out into all the earth. 7 He went and took the scroll from the right hand of him who sat on the throne. 8 And when he had taken it, the four living creatures and the twenty-four elders fell down before the Lamb. Each one had a harp and they were holding golden bowls full of incense, which are the prayers of God’s people. 9 And they sang a new song, saying:

“You are worthy to take the scroll

and to open its seals,

because you were slain,

and with your blood you purchased for God

persons from every tribe and language and people and nation.

10 You have made them to be a kingdom and priests to serve our God,

and they will reign[b] on the earth.”

11 Then I looked and heard the voice of many angels, numbering thousands upon thousands, and ten thousand times ten thousand. They encircled the throne and the living creatures and the elders. 12 In a loud voice they were saying:

“Worthy is the Lamb, who was slain,

to receive power and wealth and wisdom and strength

and honor and glory and praise!”

13 Then I heard every creature in heaven and on earth and under the earth and on the sea, and all that is in them, saying:

“To him who sits on the throne and to the Lamb

be praise and honor and glory and power,

for ever and ever!”

14 The four living creatures said, “Amen,” and the elders fell down and worshiped.

The issues of the Seven Churches: Despair, Comfort, Complacency, Assimilation

As I said, each of these churches had a different set of issues to deal with, all depending on their social location.  But what John presents is a new way of addressing them based on John's vision of a well-ordered universe with God at the center of all things, and Jesus as the One who brings restoration, resurrection and renewal.

A concentric set of circles—God at the center, Creation, Earthly leaders, Humanity

What John paints is a picture of the cosmos as it should be with God at the center of all things, honored by all of Creation, worshipped by earthly leaders and with all of humanity recognizing God's holiness.  The first century Christians would have understood this concentric circle of things because that's the world they lived in---only Caesar was at the center, and then all the rest of Creation falling in line.

Religious and civic leaders were often described with this term, but specifically in these early Christian communities these were the leaders who owed their position to God and not the other way around.  Undoubtedly, there were leaders in the church who were using their authority in ways that weren't in line with a God-ordered society.  And there were undoubtedly people who wanted things to be ordered properly especially if they were closer to the center.

When city-state leaders wanted to show their fealty to Rome, they would offer Caesar golden crowns to signify their loyalty and his divine right to be at the center of all things.  This is a direct slam to those who would give their loyalty to anyone other than God/Christ.

The scroll & the seals = Worthiness = The Lion/Lamb (who was slain)

John expects a conquering lion, and instead is met with a slain lamb.  This is the topsy turvy way that God intends for God's kingdom to look.  Only through surrender, sacrifice and radical love can the order of things be changed to fit God's economy.

Revelation challenges our notions of what the Gospel is all about—giving meaning to suffering, convicting our complacency, challenging our loyalties, turning our expectations upside down.

The Paradox of the Gospel—How Do We Hear It?

When We Are Suffering—it provides hope for the hopeless

When We Are Complacent—it fills us with holy discontent

When We Assimilate—it calls us to a higher loyalty

THE GOSPEL COMFORTS THE AFFLICTED AND AFFLICTS THE COMFORTABLE