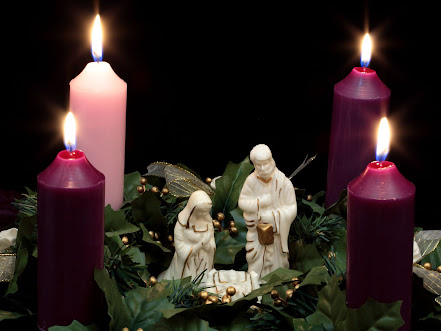 Today is the Fourth Sunday of Advent---I think a cheer is in order.  It's hard to believe but we are on the home stretch toward Christmas Eve and Christmas Day people!

But we're not there quite yet.  The journey through Advent has a few more twists and turns, and moments like today when we pause for a moment to think deeply about what we are really anticipating during this season of anticipation.

On this Fourth Sunday of Advent we turn our thoughts toward peace---not the kind of peace that is merely the absence of war or conflict, but the kind that the One who we call the Prince of Peace brings.

The kind of peace we're talking about here is the peace that according to the Scriptures "passes all understanding," or more plainly put: It defies the imagination.

I have to tell you it would be great to feel some peace right about now, wouldn't it?

Have you experienced a moment or two during the past many months when all you wanted was just a moment of peace... but life, work, family stuff, circumstances, whatever just got in the way?

I was having one of those moments the other day---I retired to my bedroom after a very long day, fortified with a bowl full of snacks: cheesy popcorn, Doritos, and some other assorted goodness.

I was watching a show on HBO Max that I'd been working my way through, and all I wanted to do was settle in, and watch some TV and eat my snacks.  My cat emerged and cuddled up at my feet.  The dog was at my side.

Then noise erupted from downstairs as two of my sons were shouting at one another.  I waited for it to subside, but it didn't, and then the inevitable call came, "Dad!!!" The dog and cat bolted for the door.

I had no choice to respond with a gentle, "What??!!" before I was forced out of bed to resolve whatever the heck was happening.

Some of y'all know what I'm talking about.  You might have experienced something similar, or perhaps the destruction of your peace came through a broken air conditioner or plumbing issue, or an argument with your spouse, or bad news about a child or a parent, or just the news of the day.

We live in a world full of noise, don't we?  A world that is full of struggle.  A world at war with itself sometimes.

There is so much talk of war around us.  One group is at war with another, one political party is doing battle with another political party, some people claim there is a culture war going on, or a war on Christmas, which has always been the most ludicrous claim in the world to me.

What is it about humankind---that we choose war and strife over peace?

It's like it's kind of a given that peace is this wonderful ideal that we put out there, especially during this time of year, but we don't really think that it's possible.  Because all we know is a war of some kind or another and not real peace.

This is the foundation that we have laid:

Vegetius: If you want peace, prepare for war.

Augustine: The purpose of all wars is peace.

I mean what chance do we have when even a great theologian like Augustine finds war as kind of inevitable if there will be peace.

But look around right now, what do you see happening in the world around us?

It feels like people have lost their minds.  It's all about fighting... winning battles... making America great again... again... beating back our enemies, whoever our enemies happen to be---or whoever the cable news channels we frequent define as our enemies for now.

What if there was a way to find real peace?  Do you think we would take it?  Based on all that we are seeing around us, it doesn't seem likely, right?

This Sunday of Advent helps to point the way toward that peace that we have been talking about... and more besides.  It helps to point us toward a new world, and to old ideas--ideas that pre-date all of humankind's striving and strife.

And we need to be pointed in the right direction...

Those who are at war with others are not at peace with themselves. - William Hazlitt

Peace cannot be kept by force, it can only be achieved by understanding. - Albert Einstein

27 Peace I leave with you; my peace I give you. I do not give to you as the world gives. Do not let your hearts be troubled and do not be afraid. - John 14:27

And peace can't be easily found when we keep thinking that if only we could fix things in our life, find some quiet, discover happiness, and all the rest of it.

Because the peace of God, shalom... the kind of peace that can be felt in the middle of chaos, strife, turbulence, and even war... that kind of peace can't be mustered on our own.

WE DISCOVER THE PEACE OF GOD WHEN WE STOP LOOKING FOR IT IN ALL THE WRONG PLACES.

2 “But you, Bethlehem Ephrathah,

though you are small among the clans[a] of Judah,

out of you will come for me

one who will be ruler over Israel,

whose origins are from of old,

3 Therefore Israel will be abandoned

until the time when she who is in labor bears a son,

and the rest of his brothers return

to join the Israelites.

4 He will stand and shepherd his flock

in the strength of the Lord,

in the majesty of the name of the Lord his God.

And they will live securely, for then his greatness

will reach to the ends of the earth.

5 And he will be our peace

A few things about this passage that will help us understand it a bit more.  Micah was written around 735 BCE after the Assyrian conquest of the Northern Kingdom of Israel.

The Assyrian king Sennacherib destroyed scores of cities and villages surrounding Jerusalem, including Micah's.  Then he turned his attention to Jerusalem and began a siege.

Micah spends a great deal of his prophetic work calling out the king, religious leaders, rulers, etc. who he declared had betrayed the people, specifically the people who lived outside of Jerusalem.  And he had a right to be ticked off.

So when you hear the words "shepherd" and "Bethlehem" what do you think of?  The Christmas story from Luke chapter 2, right?  But if you were an ancient Hebrew person hearing this prophecy, you would have thought of one person: David.

Shepherd... Bethlehem... Gathering... Security... Peace...  all of these are shades of David, the great king of Israel, who captured the cultural imagination of the Jews and still does.

But there's something different here in Micah that points away from David even while calling his memory to mind.

David was a man of war, and he was flawed... he had one of his best and most loyal military officers killed once to cover up the fact that he had slept with the guy's wife and gotten her pregnant.

No, this leader that Micah envisions is something different.  "He shall be the one of peace," he says.  In other words, the peace of God that Micah longed for would one day be found when the people of Israel stopped trying to find it by doing the same old things over and over again.

Micah declares that true peace will never be found if we continue seeking it in the same, flawed, violent and zero sum ways---this is not God's way.

Winning Isn’t Everything - (the race to the bottom)

God-Vision Clarifies - (seeing the world as God sees it)