The End of The Beginning 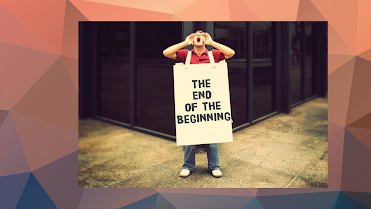 Thirty-four years ago this week the band R.E.M. released one of their biggest hits, "It's The End of The World As We Know It (And I Feel Fine)."  That might make some of you feel old.  It did me.

Let's do a sing-along for a moment... here's the chorus:

… It's the end of the world as we know it
It's the end of the world as we know it
It's the end of the world as we know it and I feel fine
I know that lots of people have pointed out that these past two years have felt a lot like the end of the world as we know it.  So is it?
I need to say that we're not studying the book of Revelation today---that series will come in January and February.  But we are going to be talking about another passage from the Bible that addresses "end times" theology.
And it includes one of the most difficult sayings of Jesus to understand.
Intrigued?  Good.  But first, we need to talk about Prophets---the self-proclaimed type.
This may not come as a shock to you, but self-proclaimed prophets are on the rise in our country, and when I say on the rise, I mean they are all over the place--on TV, social media, streaming, preaching, and spewing their outlandish predictions from pulpits, studios, home offices and more.
Nothing like a global pandemic, and political and social chaos to bring out the doomsayers and soothsayers, am I right?
This is Jeremiah Johnson.  Jeremiah Johnson was one of the first of the so-called prophets in the Evangelical and charismatic Christian camp to declare that Donald Trump would be reinstated as President after he lost the election in 2020.
When that didn't happen, Johnson apologized to his supporters and then ended up being roundly criticized and ridiculed as faithless by other Evangelicals, and self-proclaimed prophets.  He recently shuttered his ministry because he lost so much support for telling the truth.
Here's a few other prophets that are still out there proclaiming that Trump is going to be reinstated as President:
The interesting thing about every single one of these folks is that they started out preaching and teaching about the end times, and the Second Coming of Jesus.  They claim to read the signs around them and work to match those signs with their own interpretations of apocalyptic literature in the Bible.
But this particular moment in history riled them all up just as it has hundreds of thousands of Christians who see the events of the past couple of years as harbingers of the end times, fulfillment of what they believe is a prophecy about the end of the world.
What makes our moment so special?  I mean you could make all kinds of arguments about how the past couple of years have been some of the worst in our history, but there were worse moments, for sure.
And people during those eras said the same thing about the end of the world.
So what if we were able to see the calamities in our world, or in our own lives, differently?  We might be able to reframe things a bit.
Winston Churchill famously coined that phrase in a speech in 1943:

What if when we are trying to make sense of the calamities around us, we begin asking ourselves "Is this the beginning of the end... or the end of the beginning?" Because the end of the beginning means that something is about the change, something new is going to be born...
Today we're going to study Jesus' own words to his followers about what to do when it feels like the world is going to end.  And here is what I want us to hold on to as we study a challenging discourse by Jesus from Mark 13:
WHEN THE WORLD IS TURNED UPSIDE DOWN, JESUS GIVES US THE COURAGE TO STAY RIGHT-SIDE UP.
Mark 13:1-8

13 As Jesus was leaving the temple, one of his disciples said to him, “Look, Teacher! What massive stones! What magnificent buildings!”
2 “Do you see all these great buildings?” replied Jesus. “Not one stone here will be left on another; everyone will be thrown down.”
3 As Jesus was sitting on the Mount of Olives opposite the temple, Peter, James, John and Andrew asked him privately, 4 “Tell us, when will these things happen? And what will be the sign that they are all about to be fulfilled?”
5 Jesus said to them: “Watch out that no one deceives you. 6 Many will come in my name, claiming, ‘I am he,’ and will deceive many. 7 When you hear of wars and rumors of wars, do not be alarmed. Such things must happen, but the end is still to come. 8 Nation will rise against nation, and kingdom against kingdom. There will be earthquakes in various places, and famines. These are the beginning of birth pains.

Let me give you a little background on this passage, which is often referred to as the Olivet Discourse.  Most scholars believe that Mark's Gospel was actually written after 70AD and the destruction of the Temple, recalling Jesus' words about it.
This conversation takes place on the Mt. Of Olives after the disciples and Jesus left Herod's Temple, which was one of the great wonders of the ancient world.  It was also an engineering marvel, with massive foundation stones.
Photos of the Temple, and the stones.
So you can see why the disciples might have said what they said about the Temple, and how Jesus' response would have seemed so bizarre.  How do you throw down stones that size?
Well, the Romans did just that in 70AD, and this is what it looks like at the base of the Western wall now:
Photo of stones today.
This discourse is also known as the "little apocalypse" because of the form and structure and language employed.  It's not necessarily meant to be prophetic, that's not the point of apocalyptic literature.
The use of colorful imagery, word pictures, and even the prediction of calamity were meant to be understood clearly by the hearer.  And in this case, Jesus is proclaiming things that the readers of Mark's Gospel would have already seen happen.
So this is an important thing to point out... Jesus doesn't deny the fact that calamities will happen.  He just presents them as "birth pangs" of God's transformation of the world.
They aren't signs that the world is going to end...  They are signs that new things are being born.  They are signs of the end of the beginning.
Here's an important lesson that we can take away from this study:  The purpose for the watching, the waiting, and the observing is to experience and be changed by something altogether different from what we have known.
Our job is not to sit around making predictions about the end times.  In fact, that kind of preoccupation does violence to the Gospel.
So what do we do with this?
First, leave the "not-yet" to God and stay focused on the "now."
Jesus talked often about how the imminent Kingdom of God here on earth was both a now and not yet thing.  "The Kingdom is coming and is now," he would tell his followers.
It doesn't make a ton of sense on the surface, but when you realize that Jesus wanted his followers to know that Kingdom of God, the shalom of God was present in the world and was slowly gaining ground over the kingdoms of this world... it changes the way you see the signs and symbols.
Let go of our fear of the unknown—trust that God is in our future.
Learn what it means to find peace—no matter what is happening around us.
WHEN THE WORLD IS TURNED UPSIDE DOWN, JESUS GIVES US THE COURAGE TO STAY RIGHT-SIDE UP.