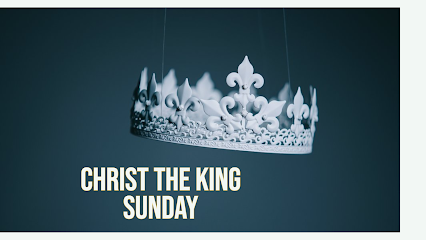 Today is Christ The King Sunday, or as it is also known, Reign of Christ Sunday--pretty exciting, right?

This is a historic feast day in the Church that teaches us about the true nature of the Kingdom of God and the purpose for the Incarnation---the theology of God becoming one of us in order to rescue all of us.

This feast day comes right before the beginning of Advent, and the Gospel reading comes to us from the Gospel of John chapter 18 where Jesus and Pilate have an interesting conversation about the nature of God's kingdom.

Yet, we still ask: Who is Jesus? and Where is the kingdom of God?  The reason why we ask these questions is that the world is not as it should be.  Which leads most of us to seek the answers to those questions on our own terms.

And there are consequences for those kinds of efforts because when we seek to discover Jesus and God's kingdom on our own terms, we tend to imagine both in ways that favor us.

"A cultural framework – a collection of myths, traditions, symbols, narratives, and value systems – that idealizes and advocates a fusion of Christianity with American civic life”

In short, Christian nationalism is a syncretism of “Christianity” and “nationalism” that distorts or even lacks what is clearly Christian.

And it is the logical end of a worldview that is individually focused, or focused on a favored few, which goes against everything that Jesus taught, and how he lived.  To that end, Christian nationalism is  also a symptom of misunderstanding who Jesus was/is.

As Christians, we are followers of Jesus, and citizens of God's kingdom first and foremost---before all other allegiances and loyalties.  Yet,  the allure of Christian nationalism is powerful, and difficult to resist.

It's also extremely dangerous.  It distorts the Christian faith, and the image of Christ so much so that it's driving emerging generations away from Christianity in frightening numbers.

I'm going to state this unequivocally and clearly:

Any expression of Christian faith that is triumphant, exclusive, arrogant, and xenophobic... denies the Lordship of Jesus... places expressions of so-called patriotism over allegiance to Jesus... does violence to the Gospel... is not Christian at all.

So today we're going to learn the truth about ourselves through Jesus' words about the kingdom of God, and who he is to us.

THE TRUTH ABOUT WHO WE ARE IS FOUND IN THESE THREE WORDS: JESUS IS LORD

33 Pilate then went back inside the palace, summoned Jesus and asked him, “Are you the king of the Jews?”

35 “Am I a Jew?” Pilate replied. “Your own people and chief priests handed you over to me. What is it you have done?”

36 Jesus said, “My kingdom is not of this world. If it were, my servants would fight to prevent my arrest by the Jewish leaders. But now my kingdom is from another place.”

Jesus answered, “You say that I am a king. In fact, the reason I was born and came into the world is to testify to the truth. Everyone on the side of truth listens to me.”

38 “What is truth?” retorted Pilate

Let's set the scene for this moment.  Jesus has been brought to Pilate for judgment by the kangaroo court of the Sanhedrin---a group of religious leaders who are threatened by Jesus' teaching and popularity.

The Sanhedrin want Jesus dead, but Pilate is loathing to give them what they want.  In truth, Pilate hates this group, but he has been forced to work with them.  His number one job is to keep the peace, and the flow of money and goods flowing back to Rome.

There have already been struggles.  There were massive protests in his early days of being governor of Judea because he put Roman insignias in the Temple, and he used Temple funds to build aqueducts.

It's believed that Pilate was kind of hanging by a thread, and the Sanhedrin knew it.  But they also needed Pilate to execute Jesus, and Pilate finds himself wondering who this guy is that has gotten everyone in a tizzy.

He wonders perhaps if by killing him he might cause unrest if Jesus' followers decide to rise up and riot.

For Pilate, everything is about control and power, who wields it, who doesn't.  He doesn't see past the status quo.  He lacks imagination for something more.  It never occurs to him that Jesus could be a different kind of revolutionary.

So when Jesus speaks to him about a kingdom without borders, one that is marked by the shalom of God, it doesn't make any sense to Pilate.  That kind of kingdom doesn't exist in his mind.

The truth eludes him because like the Jewish religious leaders, he is mired in individualism and nationalism.  Which makes his question at the end all the more tragic.  He asks "What is truth?" when the Truth, the Way and the Life was standing in front of him.

This passage teaches us the truth about the kingdom of God---that it is present wherever Christ is present, inviting, healing, restoring.  It is a kingdom for all people.  It is above nationalist aspirations.  It transcends religion.

And it brings peace, wholeness, and flourishing to all---for those who wield power in this world, and those who don't... for those who are on the outside as well as inside... It's a world where Jesus is Lord, and not Caesar---no matter what form Caesar takes throughout history.

When Jesus is Lord to us---we discover the truth about who we are, and this is how we internalize this truth and allow it to transform us and our world:

This isn't blind obedience. It's the kind of obedience that comes when we desire to know God more fully and long for God's kingdom on this earth.  We pray this in the Lord's Prayer, but we seldom stop to think about what we're actually praying for.

When we have determined that our allegiance and loyalty are to God's kingdom, and we desire to see it fulfilled, we find the kind of discerning obedience that comes from making "Love God and Love Everybody" our daily intention.

Live in hope for a future that is open to possibilities

Christian nationalism is at heart a cynical and hopeless ideology because it is grounded in an exclusive claim about what God wants. It's a slippery slope that leads to fear, hatred, bigotry, and dread of an uncertain future.

People dread that future so much that they take matters into their own hands to keep it from happening, even if the future leads to heaven on earth.

When we proclaim that Jesus is Lord, we are able to surrender our tomorrow into the hands of a loving God who wants nothing more than the best for us and all Creation.

We belong to God's kingdom and to Christ not because of something we have done or will do.  Our belonging is up to God, and God desires all to come and be fed at the table.  No one is excluded. Even us.

You don't have to vote a certain way to get it.  You can't prove yourself worthy by the amount of social media posts you make. You can't earn it by draping yourself in your country's flag.

THE TRUTH ABOUT WHO WE ARE IS FOUND IN THESE THREE WORDS: JESUS IS LORD