Grace Under Pressure - Week Four: Happily Ever After? 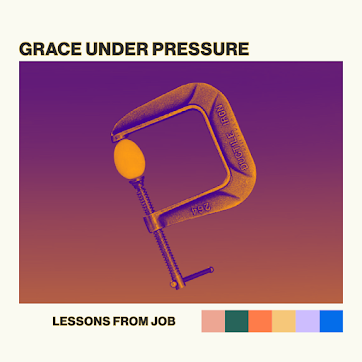 Today we are concluding our sermon series for the month of October, and we're using select readings from the oldest book in the Hebrew Scriptures as our guide.

This series is entitled Grace Under Pressure, and as I mentioned, we're going to be studying the oldest book in the Bible from the Hebrew Scriptures (OT), the story of Job, which is one of the most mysterious and misunderstood books in all of the Bible.

Job seeks to answer a question that we have all asked at least once in our life:  Why do bad things happen to good people?"

When we are facing trials and tribulations, challenges, and problems, it’s easy to wonder where God is in the middle of everything.  We may even start to wonder why God would allow the things that have happened to us, to happen.

But what if we were able to see the challenges we face in life as chances to grow stronger in our faith, to learn to trust God more, to surrender our need for control?

Maybe then we would discover the kind of grace under pressure that could transform our lives.

Today we're going to be talking about how even when it seems as though everything is going to end poorly---that we won't get our happily ever after ending---that we need to be courageously patient because there's a new beginning just around the corner.

"And they lived happily ever after..."

I was thinking about this whole idea of happily ever after, and I decided to make a list of movies that ended in "reality," films that didn't give us our nice, neat happy little ending.

“And they lived happily ever after” is one of the most tragic sentences in literature. It is tragic because it tells a falsehood about life and has led countless generations of people to expect something from human existence which is not possible on this fragile, imperfect earth... Life is not paradise. It is pain, hardship, and temptation shot through with radiant gleams of light, friendship, and love.”

But here's the rub... Your brain seems to want the happily ever after ending.

I was reading a report the other day on a major psychological study conducted on why our brains seem to be wired to desire happily ever after.  It comes down to cognitive dissonance, essentially.  We want things to end well, and probably think they should.

In fact, we most often think we deserve for things to end well, for conflicts in life to go in our favor.  And when they don't, our brains try to resolve things for us, and that never works out that well.

The reality is, the happily ever after ending that we imagine we deserve isn't the "norm" for most of us.  But this doesn't mean there isn't joy, new life on the other side of what might feel like the death of our hopes and dreams.  Quite the contrary.

In fact, in our story today we'll see that Job's response to his trials and tribulations is extremely raw and real, and because of his honesty, his faithfulness in the midst of a time of real struggle, everything changes for him.

I need to say here that Job actually did doubt God---it was nuanced, but he did.  Job's doubts were centered on God's justice, not God's power.  Job demands to be head by God to plead his case to the Almighty.

He thinks that if he can only correct God's assumptions about him, which he feels were due to misinformation--that God will sort everything out.

And then he learns something from the ash heap that he's sitting on, bemoaning his fate, and struggling with God and God's seemingly arbitrary and capricious actions.

What Job discovers is that his old ways of thinking/talking about God fail and that he needs to learn something new---and these new things transform him and his story.

As we prepare to dig into the text for today, and we find out what happens in Job's story, we need to focus on one very important thing---the one thing I want you to take away from this sermon more than anything: