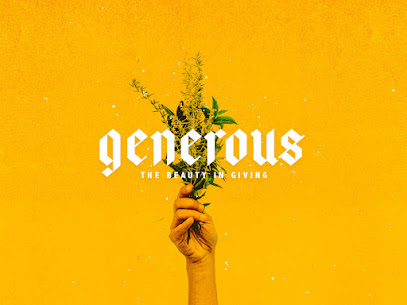 Today we're going to continue our sermon series for the month of September---a series entitled: Generous--The Beauty in Giving.

There’s a good reason why so many people are jaded and suspicious when preachers talk about money.  But did you know that Jesus talked about money more than any other subject other than the kingdom of God?  Jesus knew that if his followers didn’t learn to live generously, materialism could very well choke the life out of their faith. Generosity in its purest, simplest, most loving form is a beautiful thing.

This sermon series will explore how the beauty of Generosity can change your life, and maybe even your world.

Today we're going to be talking about the joy of Generosity, and how if joy isn't at the heart of our efforts to be generous---they are not actually generous.

Several years ago, there was a joint study done by the University of Chicago and Northwestern University about the role that joy plays in generosity.  The focus of the study was on a particular psychological phenomenon called Hedonic Adaption.

Hedonic Adaption is what occurs when humans perform a task, a behavior, or an action that brings them joy releases dopamine into their brain, and otherwise creates happy-go-lucky feelings.

Over time even actions that bring people joy produce less and less joy if performed over and over again.  In other words, even if a person enjoys doing something, they will experience diminished happiness over time the more they do it.

The exception to this rule is when the action that is being performed is an act of generosity.

The main part of this experiment was to give the test subjects $5 every day over a period of time with the caveat that they spend it on something each time they received it.

In the end, the researchers determined that when the focus was on the outcomes of sharing the money they were given, rather than their own personal experience the test subjects felt more connected, whole, and happy.

In other words, when they acted generously they felt better.  And they also reported a sense of belonging and connection that was more long-lasting than any momentary feelings of joy they may have felt from spending the money on themselves.

So why talk about this in church?  I imagine that some of you might be thinking, "You're teaching us all this so that you can get us to give more."  I get that sentiment.  But that's not why we're talking about this now.

I want our congregation to learn what it means to Love God and Love Everybody from a place of abundance and generosity.  I want you to find joy in giving--either to our church, your favorite charity, but also to your family and friends.  I want you to find wholeness and joy.

The kind of joy that we forget when we get older... more jaded... more weighed down by the cares of the world... more focused on ourselves...

Let me show you a quick video about a young girl who exemplifies what it means to practice simple, joyful giving that is beautiful and true.

We need to rediscover the joy of giving, the joy of living generous lives.  And this is what I want us to hang on to today--the one thing that will weave it's way through our entire sermon:

Let's read the passage of Scripture we've been studying once again---from 2 Corinthians 9:6-8:

6 Remember this: Whoever sows sparingly will also reap sparingly, and whoever sows generously will also reap generously. 7 Each of you should give what you have decided in your heart to give, not reluctantly or under compulsion, for God loves a cheerful giver. 8 And God is able to bless you abundantly, so that in all things at all times, having all that you need, you will abound in every good work.

The verse that we're going to be focusing on today is actually just a snippet of a verse, but it's one that you hear every single week when you attend worship:

To begin with, we need to understand the way that Paul thinks.  Paul was a rabbi, a star student in his early years, someone who knew the Hebrew Scriptures inside and out.

So when Paul wrote his letters to the various churches he was mentoring, he would pepper his prose with all kinds of Scriptural references, most likely written from memory.

This particular passage is believed by scholars to be culled from Proverbs 22:9, which reads like this:

“A generous person will be happy because they share their food with those in need.”

Paul was probably quoting this from memory here.  And he was also hearkening back to the mandate that was given to the Gentile Christians by the Jerusalem leaders when he went there to argue for their inclusion.

One of the main things that the Jerusalem church asked the Gentile churches to do was to "remember the poor."  And because of the plight of the Christians in Jerusalem--due to a famine--Paul is placing them in the category of "the poor."

He wants to church in Jerusalem to see their Gentile counterparts as full members of the Jesus movement---members who do not need to become Jewish in order to be thought of as included.

Paul also wanted the Corinthians to resist the cultural influences of their day, which seemed to honor the kind of generosity that was self-centered, manipulative with the ultimate goal of receiving rewards---either here or in the hereafter.

This is the essential definition of reluctant generosity which isn't generous.

Paul is stating here that there is no genuine joy in reluctance, only calculating self-concern.

In other words, he wanted the Corinthians to push back against the so-called generosity of Roman culture which tended toward materialism, selfishness and was marked by alleged acts of generosity that were more self-aggrandizing than generous.

Good thing we've moved past all of that ancient stuff, am I right?

Paul wanted the Corinthians to get back to basics.  He wanted them to get in touch with the simple, beautiful experience of living from abundance rather than scarcity.

Essentially this is what Paul is trying to say here with this little snippet of a verse:

When we give cheerfully, we are acting out of a pure, beautiful, child-like kind of faith that is selfless and surrendered.  And the result is pure joy.

So what can you and I do to become "cheerful givers?" It all comes down to intentionality.  We have to be intentional when it comes to the kind of generosity that brings real joy---the kind that is devoid of selfish motives and is imbued with childlike faith.
What Can We Do To Be Cheerful Givers?
Have A Plan—make it the first thing you budget. This isn't always easy, especially when you might be staring down a long list of bills, a packed schedule, or a crowded list of priorities.  But if we plan our generosity first---before we plan other things, it creates a sense of joyful purpose that can't be duplicated.
Follow Your Money—find ways to be engaged as you give.  Here's what I mean by this:  Supporting organizations, missions, and things that you love and believe in through your financial gifts is an awesome thing... but you need to follow your money and get engaged by giving of your time and your talent, too.  There's so much joy to be had when you are all in with all that you can give.
Don’t Always Make Sense—do something crazy sometimes.  I can't tell you how many times in my life I have felt compelled to do something generous that seemed crazy both to me and to other people.  But there's something exhilarating and joyful about being extravagant for a worthy cause.
Trust God With the Outcomes—take yourself out of the equation. It's hard for us to do, but we need to remove our ego from our generosity, or it will devolve into reluctance, which isn't generosity at all.  When you let go of your need to be praised, your need for affirmation, your need to feel fulfilled... when you let go of the outcomes... You are able to truly be generous, to feel a pure joy that won't fade away.
Imagine what it would look like if we really got this...
Imagine the difference it would make in the world...
Imagine how we could be changed from the inside out...
IF GENEROSITY ISN'T JOYFUL IT ISN'T GENEROSITY