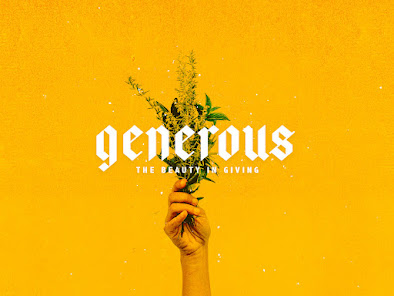 Today we're going to continue our sermon series for the month of September---a series entitled: Generous--The Beauty in Giving.

There’s a good reason why so many people are jaded and suspicious when preachers talk about money.  But did you know that Jesus talked about money more than any other subject other than the kingdom of God?  Jesus knew that if his followers didn’t learn to live generously, materialism could very well choke the life out of their faith. Generosity in its purest, simplest, most loving form is a beautiful thing.

This sermon series will explore how the beauty of Generosity can change your life, and maybe even your world.

Today we're going to be talking about how Generosity--true Generosity--is never reluctant.

Let me ask you a question...

How do we know when what seems like generosity on the surface really isn't generosity at all?

When it's more about the giver---it is selfish.  This looks like someone who does generous things, but expects to be lauded for it, or achieve recognition.

When reciprocation is expected---it is manipulation.  We've all had that person in our life, who seemed generous, but really expected something in return.  They kept a ledger.

When it's controlled---it's about power.  This is where someone acts generously but wants to control how their generosity is received.

And here's the thing y'all---we have all done at least one or more of these things throughout our lives.  We see it clearly in others, but not often in ourselves.

So where does this come from?  Where do acts of ungenerous generosity originate?

They come from a place of lack or scarcity.  We talked about this last week--how living in scarcity leads to a tight-fisted way of moving and being in the world.

They often mask fears and insecurities.  People will often act in seemingly generous ways for the wrong reasons because they are afraid of trusting, afraid of being vulnerable, afraid of doing it wrong.

But when we finally get that God is never reluctant when it comes to God's generosity... when we finally figure out that we are being held back from living in abundance by our own fears...

We then start to realize that the only way to combat all of those issues is to become generous without reluctance... to be truly generous with no strings attached... to surrender our outcomes.

Let me show you this video from the I Like Giving website which tells the story of a woman who learned what it meant to surrender and live from abundance rather than scarcity.

The one thing that I want us to hold on to today is simply this:

THERE IS NO POSSIBILITY OF GOD HOLDING BACK.

Our text for today comes to us from a tiny sliver of a verse that was part of the passage from 2 Corinthians 9:6-8 that we read last week.

6 Remember this: Whoever sows sparingly will also reap sparingly, and whoever sows generously will also reap generously. 7 Each of you should give what you have decided in your heart to give, not reluctantly or under compulsion, for God loves a cheerful giver. 8 And God is able to bless you abundantly, so that in all things at all times, having all that you need, you will abound in every good work.

Let me give you a little more insight into what is going on in this letter from Paul--some insight that might surprise you.

As we mentioned last week, Paul was writing to all of the "Gentile" churches he'd planted in order to secure a love offering for the church at Jerusalem.

There was a conflict between the groups because of the insistence of some of the Jerusalem bands that Gentiles needed to become Jewish in order to be Christian.

So Paul actually compares the Corinthians with the Macedonians, who were less well off.  He basically says, "The Macedonians gave freely and generously, and they really didn't have that much to give---so what are you going to do Corinthians?"

He also doesn't seem to shy away from a little bit of prosperity gospel as he does it.  Declaring that if they give, they'll receive blessings.  It's hard to parse these things from Paul, to be honest.

But sometimes the text shows us what not to do---even as it speaks truth in other ways.  And to be fair, Paul isn't always the greatest example of forbearance, grace, and inclusivity---in spite of the fact that he was constantly advocating for the inclusion of Gentiles into the Jewish-Christian fold.

What Paul knew, however, was that in the end, living from a place of abundance and practicing radical generosity was the best and truest way to embody Christ's redeeming work through the Resurrection.

Each of you should give what you have decided in your heart to give, not reluctantly or under compulsion...

The literal translation here speaks to giving "without a grudging heart," and not to give under compulsion.

Now his warning about not giving under compulsion might seem to fly in the face of what Paul does throughout this letter when it comes to his exhortation that the Corinthians give generously to the Jerusalem fund, but we need to dig a bit deeper to see what this means in the first century.

Paul was writing in a particular cultural context where patronage was a way of life.  The rich would fund artists, artisans, scholars, workers--anyone who could provide them with a service.

Their largesse bought them a great deal.  Some people who were on the receiving end of patronage were treated not as employees but as servants.  There was a tremendous imbalance and manipulation in the patronage culture.

Paul was keen to lay out that the gifts the Corinthians were giving were to be given with a willing heart and no strings attached.  They had to surrender the outcome.

What we learn from this passage is a life-changing truth:

Living generously means that we avoid ungenerous generosity through the kind of open-handed surrender that gives with joy, and asks nothing in return.

So how do we figure this out within our own culture?  What are the truths here that we can hold on to in order to help us become truly generous?

Marks of a Truly Generous Person

They know the pie is not finite—there’s always enough pie.  When you live in scarcity, you live believing that the pie will run out at some point.

They trust others—surrender their outcomes.  I used to control my giving because I  only wanted to give to the church when I could direct it.

They dream big dreams. They're not afraid to take a risk that doesn't make a lot of sense in order to make a better world.

They don’t live a ledger-oriented life.  The church member who calculated her hours.

They believe God is generous and loving.  In the end, this is the most important factor.

Every moment when I've trusted the urging of the Holy Spirit... When I've given without compulsion... When I've lived from a place of abundance... God always blows my mind.

Jesus feeding the five thousand---a sign and symbol of God's generosity.  Taking a little and multiplying it in amazing ways to blow our minds.

THERE IS NO POSSIBILITY OF GOD HOLDING BACK.