I Am The Way The Truth & The Life 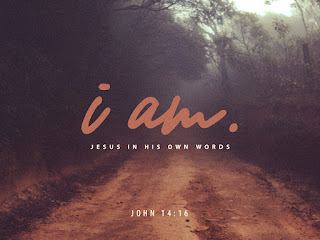 Today we are launching a brand new sermon series entitled, "I Am: Jesus In His Own Words."

This series will study five of those important statements, and help us become more connected to who Jesus is for us today—in his own words.

Today we're going to be exploring what Jesus meant when he said, "I Am The Way, The Truth and the Life, no one comes to the Father, except through me."

What do I mean by this?  Well, simply put the "scandal" that I'm referring to is the claim that believing in Jesus is the only way that you can ensure you go to heaven when you die.  There was a time when this claim didn't ruffle a lot of feathers because most Americans believed it to be true in one fashion or another.

But over time, as our society has become more diverse, connected, and informed, Christians increasingly find themselves in relationships with people who aren't Christian, with views of their own about God, and what happens when we die.

Back in the 1970's there was a groovy marketing campaign that I remember seeing on bumper stickers and billboards.  It was a direct response to the increase in diversity and the objections to Christianity's exclusive claims.

Every one of us sitting here has had to think about this, and probably more than once.  We ask this question:  "What about my___________friend?  Loved one?  Co-worker? You can fill in the blank with a number of things... Muslim, Hindu, Buddhist, Agnostic, Atheist...

This question is so difficult for us that we seldom think about it too deeply.

But maybe we should.  It's important for us to understand what Jesus really meant, after all.  Because with Jesus, there is always more to what he's saying.  There's the thing that is under the thing, if you know what I mean.

So let me ask you this...  Let's say you die and find yourself in heaven. As you meander the streets would you be shocked and dismayed to see Ghandi there playing tennis?  Or would it just... make sense?

I once heard author and pastor Rob Bell tell a story about how he was about to go on a TV talk show some years ago.  Rock and roll star Sammy Hagar was in the green room with him and asked Rob what he did that would warrant his appearance.

Rob proceeded to tell him that mostly he went around the country giving talks, and that the question that permeated all of the things he shared was simply, "Why doesn't God get what God wants?" And what does God really want?  For us to begin living eternally right here and now.

Rob told Hagar how he believed God is for us, and that Jesus radical expression of that love is one of the most compelling things he'd ever experienced.

Hagar took all of this in, and then when Rob finished, he said softly. "Man you could change the world with that stuff."  Only he didn't say stuff because he's Sammy Hagar.  Who coincidentally wrote, "There's Only One Way to Rock." I found that interesting.

That stuff can change the world.

This is what Jesus is declaring when he says to his followers, "I Am the Way, the Truth and the Life..."  He didn't tell his followers to worship him, he told them to follow... to emulate him... to see the world and everyone in it as he did... as God does...

Here's what I believe we can take away from today's sermon, and I want you to hold on to it even if you don't remember a single thing I say beyond this:

The One Way to Truth and Life Isn't a Principle, It's a Person.

Let's read the passage we're talking about, shall we?

“Do not let your hearts be troubled. You believe in God[a]; believe also in me. 2 My Father’s house has many rooms; if that were not so, would I have told you that I am going there to prepare  a place for you? 3 And if I go and prepare a place for you, I will come back and take you to be with me that you also may be where I am. 4 You know the way to the place where I am going.”5 Thomas said to him, “Lord, we don’t know where you are going, so how can we know the way?” 6 Jesus answered, “I am the way and the truth and the life. No one comes to the Father except through me. 7 If you really know me, you will know[b] my Father as well. From now on, you do know him and have seen him.”

This passage is part of the "Farewell Discourse" which covers several chapters in John's Gospel.  Honestly, this passage is most often preached or read at funerals.  There's an inherent sense of hope in the words of Jesus here, but there's so much more as well.

The disciples are confused and troubled by the words of Jesus here.  They were expecting a revolution--an armed one if necessary--to throw off Roman oppression and restore Israel to a place of prominence, and them along with it.

They want to see God.

I mean, they have been witnesses to all kinds of things... miracles, healings, raising someone from the dead... but yet, they still want more.  Jesus' prophetic words seem to be in direct opposition to what they thought was going to happen.

Jesus boldly declares that seeing him is all they ever needed to see God.  This is a pretty bold claim, and especially so in a culture where that kind of claim could get you killed.  There's a particular nuance to Jesus using the words "I am" to talk about himself.

The connection goes all the way back to the story of Moses and the burning bush.  Tell the story.

What Jesus is doing here is revealing himself to be simultaneously the access to and the embodiment of life with God.

Jesus essentially says, "Don't worry, trust me.  Following this way will lead you to the truth about your eternal life, right here and now... and always."

1.  Live like we mean what we say we believe.  - Does it look like we are following Jesus?  How is Jesus being made visible in our life, in our words, actions?

2. Embrace the Mystery of God's Crazy Awesome Grace. - How do we know how far God is willing to go to get what God wants? Story of young woman whose father wasn't a Christian.

What if we figured this out?  What we if began to live our lives emulating Jesus' radical love and grace?  What if we lived eternally right now?  That stuff could change the world.

The One Way to Truth and Life Isn't a Principle, It's a Person.