This Is My Story - Week Three: Come and See 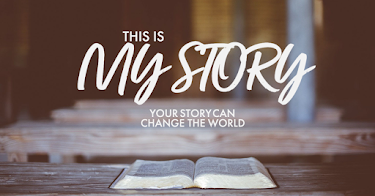 This week are continuing the sermon series This Is My Story. The idea behind this series is pretty simple...

Trust is hard to come by these days.  We have learned the hard way not to trust a lot of news sources, or at the very least, we question many things based on our lack of trust in the news media, and pretty much most of the things our friends and acquaintances post online.

So in a world where it's hard to know what is true---your story makes all the difference, especially the story of your faith journey, your experiences with God, your connection to a faith community.

Today we're going to be learning how you might be a living invitation for a better story, and how that just might change someone's life or a lot of someone's lives.

The Trust Project - gathering data on the decline of trust in our culture.

The number one reason people gave a couple of years ago was that they were worried about getting misinformation and sharing it.

Now, not so much.  People will share misinformation right and left if it fits the narrative of the way they see the world.  They just don't trust everyone else's intentions.

So in the midst of all of this distrust, something has happened.  People have become less and less inclined to trust what they hear or see from the Church and church-y people.

And how have Christians and the Church responded to this?

1. Doubling down on Information---it's all about a set of beliefs, doctrines, dogmas, traditions, etc.

2. Answering questions no one is asking---listen, the world has moved on, but the Church is still arguing about women in leadership, what kind of music is best, and whether LGBTQ people can be fully included in the Church.

No one is asking those questions, but the Church is always eager to answer them.

3. Telling a story that's way too small.  Whatever they seem to be saying, here's the response--the Gospel is bigger than that.

It's time we started telling a better story.

Your story is an invitation.

43 The next day Jesus decided to leave for Galilee. Finding Philip, he said to him, “Follow me.”

44 Philip, like Andrew and Peter, was from the town of Bethsaida. 45 Philip found Nathanael and told him, “We have found the one Moses wrote about in the Law, and about whom the prophets also wrote—Jesus of Nazareth, the son of Joseph.”

46 “Nazareth! Can anything good come from there?” Nathanael asked.

47 When Jesus saw Nathanael approaching, he said of him, “Here truly is an Israelite in whom there is no deceit.”

Jesus answered, “I saw you while you were still under the fig tree before Philip called you.”

50 Jesus said, “You believe[a] because I told you I saw you under the fig tree. You will see greater things than that.” 51 He then added, “Very truly I tell you,[b] you[c] will see ‘heaven open, and the angels of God ascending and descending on’[d] the Son of Man.”

Here's a bit of background on this story, and particularly on Philip. Philip's calling by Jesus here is interesting.  The author of John was wanting to show how some of the followers of John the Baptist began gravitating over to Jesus. Philip gets that call, and responds to it.

Then he thinks of his friend Nathanel.  Nathanel's name means "Gift from God" and the location where Philip finds him is important.  He's sitting under a fig tree, which is first-century Jewish code for someone who was longing for God to make the world right.  A fig tree is where you would go to pray, to repent, to symbolize peace and prosperity for Israel... it was a long list.

And Nathanael was suspicious.  He was probably wounded by the lack of response to his prayers.  He was filled with longing for the Messiah to come, to free the Hebrew people from Roman oppression... he wanted a better world.

So he comes back at Philip with a theological argument.  "Can anything good come out of Nazareth?"  This was both a slam and also a genuine question.  There's no mention of Nazareth in the Messianic prophecies.

When Nathanael meets Jesus, he has a unique experience that is mystical, and wonderful.  He feels known and seen.  Jesus spoke into his life.  And then he makes a declaration about Jesus Lordship that is nothing short of amazing.  But that's what you do when you feel known.

This was Philips' gift--a storyteller to the marginalized.  He himself experienced it, according to tradition.  His name is Greek, which means he was a Hellenized Jew, and there was strife between Hellenized Jews and those who were centered in Israel.

Ethiopian eunuch.  Samaritans.  He invited people into a better story.

You could very well be a living, breathing invitation to a better story for someone who has given up on finding one.

What Can We Do Right Now To Start Living This?

Know your own story—and own it. - You have a unique experience of God that can't be replicated, but when you know it and own it, you can share it with confidence.

Invitation over Information—practice saying “Come and See.” No one ever got out-argued and decided to follow Jesus.  You should be practicing the art of inviting, not explaining.  Ways you can do this: mission, fellowship, mentoring, presence.

Surrender the Outcomes—it’s not up to you, it’s up to God. Everyone has their own experience, just as you did.  You have to make the introductions, and then let the Spirit do the Spirit's work.

Story about dad and his daughter.

Your story is an invitation.