This Is My Story - Week Four: A Second Chance To Make A First Impression 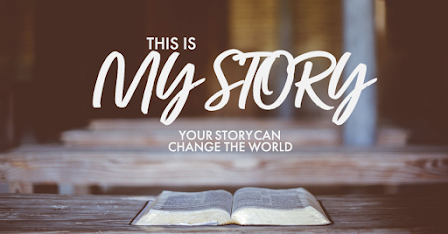 Today we are concluding the sermon series This Is My Story.  This series has been focused on this basic idea:  In a world where it's hard to know what is true---your story makes all the difference.

Our focus today is something that a lot of us need to hear:  No matter where your story has led you, it's not over--the ending hasn't been written.

In other words, you may have things in your past---things that have happened to you, mistakes that you have made, decisions that you wish you could do over... and you might feel like you are damaged goods, or you missed your moment, or that you are somehow disqualified from being used by God...

And I want you to know right off the bat---none of those things are true.  Your story isn't over, not by a long shot.

Sadly, it's hard for most of us to internalize this simple and beautiful truth, mostly because we are far too busy creating a false narrative about ourselves that we tell ourselves from time to time, or maybe all the time.

Ever said things like that to yourself?  I know I have.  And sometimes I say worse things, truth be told.

I got to thinking about all of this, and I realized something about myself, and I have a hunch that I'm not alone.  You see, I want the story of my life to be heroic, epic, and amazing.  I would like to imagine Henry Cavill playing me in the movie version of my life story.

But more likely it would be Steve Buscemi.

Joseph Campbell, the great literary theorist and author of Hero of A Thousand Faces, outlined 12 steps in the Heroic Journey.  He theorized that in every heroic tale, the hero would go through a twelve-step process from the beginning of the journey all the way through to its end.

The eleventh step is the one that got my attention, though.  According to Campbell, it's the moment of truth in every heroic story.  The hero reaches a point where all seems lost, and everything is riding on what the hero does next.  The hero then has a moment where a second chance occurs---a chance to do the thing that perhaps the hero failed at already.

The amazing thing is, for us that moment has already happened... we already have our second chance because of what Jesus did for us and for all of Creation.

And your story--no matter what you might have done with it, or how you tell it to yourself--is full of Resurrection.

I want you to hear this today---and this is the main idea that is going to weave its way through this entire sermon:  Your story deserves a second chance.

We're going to explore what this means by taking a look at the story of Peter, and what happened when he finally began to understand how full of Resurrection his own story was, and how it changed him.

37 When the people heard this, they were cut to the heart and said to Peter and the other apostles, “Brothers, what shall we do?”

38 Peter replied, “Repent and be baptized, every one of you, in the name of Jesus Christ for the forgiveness of your sins. And you will receive the gift of the Holy Spirit. 39 The promise is for you and your children and for all who are far off—for all whom the Lord our God will call.”

40 With many other words he warned them; and he pleaded with them, “Save yourselves from this corrupt generation.” 41 Those who accepted his message were baptized, and about three thousand were added to their number that day.

No matter what has happened, or what you have done—you will get your second chance… over… and over… But will you take it?

You might be thinking at this point... how do I even make this work?

Come to terms with it—whatever it is, speak the truth about it to yourself.  Take away it's power.

Realize the worst things are never the last thing.  What doesn't kill you makes you weird at parties.

Open up to the truth about God’s radical grace.  It never runs out... ever.

Employ the Hamilton Principle.  Do not throw away your shot...

Your story deserves a second chance.