We > Me - Week Four: Letters To The Church 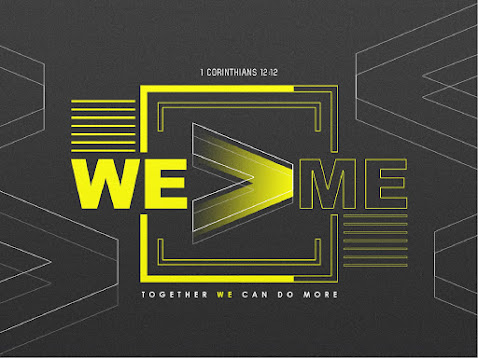 This week we're continuing the sermon series We > Me: Together We Can Do More, and we're wrestling with the question, "Does the Church still matter?"

Today we're going to take a peek at some letters that were written to some of the earliest Christian churches in the first century, and we're going to learn what it means to be part of a community of faith where the "We" is all about building one another up.

First, let me ask you something.  What letters do we remember the most?  And you can lump emails into these as well because that kind of counts right now.  Or Facebook messages, if you want, or direct messages on Twitter... you get the idea.

So, what letters do you remember the most---the ones that stood out for you?  That you can still recall how it felt to read it?  We want to say that it's the good letters that we remember more easily, right?

And you probably can think of those letters if I give you enough time.  But truth be told, the letters that we tend to remember more easily are the rough ones.

It's kind of human nature, to be honest.  We internalize negative feedback quicker than positive feedback, and it's the negative letters, messages, and the like that often stick with us more than the good ones.

Your spouse can write you a thousand love letters, but the one that really sticks with you is the one from that old boyfriend or girlfriend where they told you, "It's not you, it's me."

You might frame the acceptance letter you got from the school that accepted you, but you catalogued all of the other letters of the ones that rejected you in a file system you access on a regular basis.

Tom Brady, the winningest QB in history, with multiple Super Bowl wins, MVP awards... still has a chip on his shoulder because he was the 199th pick in the NFL Draft.  He remembers all the teams that passed on him, or picked QBs ahead of him.

I remember every church that passed on me when I was job searching.  Sometimes I even go on their websites to see how many pastors they've gone through since they passed on me.  Take that.

Church-y people, at least in my experience, are masters at what I would call "veiled criticism."  You can also call this a chocolate-covered dog turd.  It doesn't sound exactly like criticism, but then all of a sudden you bite down on it, and yep...  there it is.

If you've been around church-y world long enough you will hear things like this:

"People are saying that..."  Have you ever heard that before?  Yeah, someone comes up to you with a concerned look on their face.  They are troubled.  You start to feel troubled, too.  They tell you that they need to share something with you, and then...

"People are saying that..."  And then get ready for the chocolate-covered dog turd.  Here's what you need to know about that phrase.  When someone is saying, "People are saying," they're one of the people.

Also, church-y world is full of folks who love to sign their notes "Anonymous."  I've gotten my share of those notes.  I've got a file for them.

Here's the secret about all of this.  Church-y people can sound a lot like the people outside of the church, if we're being honest.  Which is a bummer sometimes, isn't it?  Every single one of us has our own stories about the wounds we've received at the hands of church-y people.

You see, this is what it means to be together---you want the best for one another.  You want your church family members to win.  You want them to live their best and fullest life.

You don't want to tear them down, gossip about them, or... offer up chocolate-covered dog turds at the potluck, can I get a witness?

This is the one thing that I want us to hold on to throughout this entire sermon:  Together We Build Each Other Up.

In the book of Revelation chapters 2-3, John the Revelator writes to seven churches that were all located in what is now modern-day Turkey.

The background to these letters---Roman empire, persecution, neighbors.

This letter was a composition designed to demonstrate the need for endurance in the midst of all of the chaos.  John the Revelator wants to encourage, comfort, exhort and offer hope.

Check out some of the key lines here:

Ephesus: I know your deeds, your hard work and your perseverance. You have persevered and have endured hardships for my name, and have not grown weary.

Smyrna: I know your afflictions and your poverty—yet you are rich! Be faithful, even to the point of death, and I will give you life as your victor’s crown.

Pergamum: I know where you live—where Satan has his throne. Yet you remain true to my name.

Thyatira: I know your deeds, your love and faith, your service and perseverance, and that you are now doing more than you did at first.

Sardis: I know your deeds; you have a reputation of being alive, but you are dead.  Wake up!

Philadelphia: I know that you have little strength, yet you have kept my word and have not denied my name.

Laodicea: I know your deeds, that you are neither cold nor hot. I wish you were either one or the other! Those whom I love I rebuke and discipline.

The Revelator is speaking as though it's Christ doing the talking, which would have been a familiar kind of way to speak to them--filled with authority, but with an intimacy and familiarity that shows understanding, and personal connection.

He starts these letters off with "I know..."  He gets it.

And the key ideas we see being lifted up have to do with Perseverance, Afflictions that they suffered, Faithfulness during times of trial, and a refusal to Assimilate to the Roman way of living--materialism, nationalism, Caesar worship, and the like.

John modeled speaking the truth in love to a community that needed to learn how to offer mutual encouragement, support, and accountability.

We live in troubling times, and we have seen all too well the temptation that exists for Christians to assimilate to the culture of the Empire and forget the very reason why we gather in the first place.

So how do we become this kind of community--where we build each other up, together?

When We > Me - We really do speak the truth in love.

When We > Me - We assume the best of one another.

When We > Me - We call each other to faithfulness with mercy.

Let me tell you a story about two moments and two different conversations...
Because in the end, Together we build each other up.