Palm Sunday - When The Center Feels Far Away 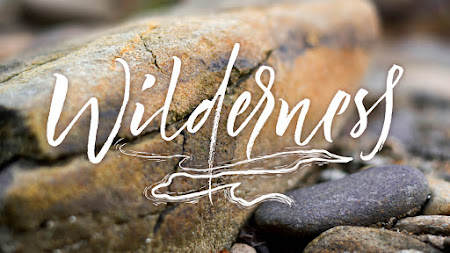 Our Lenten journey is coming to an end as we enter into Holy Week today, and so once again we have the opportunity to reflect on our theme for these past nearly forty days---Lent as a wilderness journey.

Today we are going to read the story of Jesus' triumphal entry into Jerusalem on the very first Palm Sunday, and we're going to see how Jesus' journey was filled with twists and turns.

That's how the journey in the wilderness can seem like at times.  When we have disruptions, unexpected seasons of isolation struggles with direction, and all of the things that the wilderness brings, it can be dizzying.

The path through the wilderness is full of switchbacks, and winding routes that lead us forward, but in a way that it's hard for us to know if we're getting any closer to the center.

It's like waiting in line at an amusement part...

Or trying to get your COVID vaccine...

But mostly it's like trying to find the end to a long, hard journey through the wilderness.  You think that you are getting closer to the center, and sometimes you can even see the end of the path... you think.  But then suddenly the path takes you back where you came from, away from the end, and it can feel like you're never going to get there.

The closest thing I can think of to illustrate this journey is a labyrinth.  A labyrinth is a long and winding path that takes you to the center, but even though there is a single way forward, it can feel like a maze at times.

Labyrinths have been used for centuries---long before Christianity--as a way to help those who walk them to connect with the spirit world.  And they have been found all over the world in various forms, which has led to countless forms of speculation as to why so many people in so many different cultures were all using them.

Christians in the Middle Ages began using labyrinths as a substitute for pilgrimages to the Holy Land, which not everyone had the means to make.  So instead you would go down to your local cathedral, and walk the labyrinth in the center of the worship space, all the while searching for a spiritual path to match the physical one.

The thing about a labyrinth is that it removes the common understanding that we all share about linear time and direction.

In other words, it seems like you'll never get there from here when you are walking a labyrinth, despite the fact that you know the path you are on leads to the center.

At times you will be so close to the center you could touch it, but as you continue on the path you draw farther and farther away from the center, even to the point of losing sight of it.

Your reference points are moot when you walk the labyrinth.  You are forced to focus only on what's in front of you to keep your frame of reference clear--to keep moving forward no matter what your eyes tell you.

As we prepare to read the story of Palm Sunday from Matthew 21, I want to share with you the main idea for today's sermon, which will be weaving it's way throughout our conversation:

As they approached Jerusalem and came to Bethphage on the Mount of Olives, Jesus sent two disciples, 2 saying to them, “Go to the village ahead of you, and at once you will find a donkey tied there, with her colt by her. Untie them and bring them to me. 3 If anyone says anything to you, say that the Lord needs them, and he will send them right away.”

‘See, your king comes to you,

gentle and riding on a donkey,

“Blessed is he who comes in the name of the Lord!”[c]=

“Hosanna[d] in the highest heaven!”

Jesus' journey to the center of where he must go has a lot of twists and turns, stops, and starts.  His followers probably felt disoriented along the way, especially when the path took them to Jerusalem where Jesus was wanted by the religious leaders.

Thomas---let us go to Jerusalem so we may die with him.  They thought it was going to be a final confrontation.  Their hope was pinned to the idea that he was going to do something dramatic and amazing to restore the fortunes of Israel, and they would be given seats of prominence in the new kingdom he'd been talking about.

It wasn't until later that they had the opportunity to look back and realize just how waaaayyy off they were!

But in this part of the journey, we see them undoubtedly wondering just where Jesus was taking them as they are asked to go and steal a donkey, and then throw a parade... use their cloaks as a saddle for Jesus to sit on the donkey... and wave palms and shout "Hosanna!  Blessed is he who comes in the name of the Lord!"

This was an act of sedition in a way---against the oppressive Roman empire that demanded worship of Caesar.

The waving of palms hearkened back to the Maccabean revolt and the victory over a Syro-Grecian king, who had sought to eradicate the Jews.  It was a sign of national pride, and also in praise of God, who delivers God's people.

But it was more than that---it was also a repudiation of the commands of the religious leaders about following Jesus.

In fact, later on during his trumped-up trial, Pilate will ask the religious leaders, "People are saying this guy might be a king... do you say the same thing?"  And then the religious leaders speak their loyalty to Caesar who has declared himself on par with Yahweh... "We have no king but Caesar!"

The disciples had to be filled with a disorienting kind of excitement mixed with dread.  They knew Jesus' actions were going to draw the ire of the religious leaders and the Romans, and they were ready for what they thought would come next.

But all too quickly they begin to realize that the road they are on seems to be leading them the wrong way.  And they soon would experience loss, disappointment, and death.  They thought that Jesus would lead a revolution, but instead, he is betrayed, arrested, and eventually executed.

Little did they know that even those hard turns in the path were still leading them to the center, which was Resurrection.

The road in the wilderness is like a labyrinth because it requires trust---trust that there is hope at the center, even though it's hard to see it clearly.

Let me ask you something...

What has it felt like this past year with all it's twists and turns?

I bet you had moments where you felt close to hope... and moments when you didn't.  Not by a long shot.

It has felt sometimes during this journey that we were as far away from hope as we could get, and then suddenly we would catch a glimpse of it... moments of kindness, clarity, joy, triumph...

What does the center look like for you right now?

Or maybe something even more miraculous---restoration, renewal, resurrection.

How much do you trust the One who sets you on this road?  How much are you willing to trust that the center is closer than you think even though you might not be able to see it right now?

This is what it is going to take to keep moving forward, which is the only way to move for us right now.

But you can trust this... Not only is Christ journeying with you Christ has already been before you to the center... you have nothing to fear.