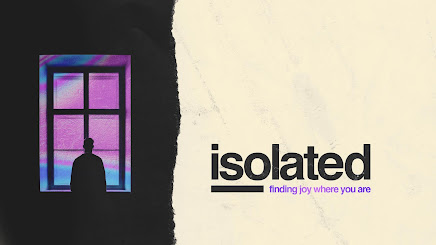 Today we are going to continue the sermon series we started last week, a three-part series entitled, "Isolated: Finding Joy Where You Are."

This series will explore what it means to find joy where you are---even in the midst of isolation the kind that has been brought on by the most challenging season in the history of all of us.

So it's confession time... and listen you don't have to be shy about this because all of you are sitting at home and I can't see your faces if you start feeling guilty...

Here's the confessional challenge for us:

At any time during this pandemic did you... in a moment when no one was around... when you were feeling really low...  make the decision to do something that you aren't really proud of... but that you did anyway...  and what I'm talking about here is...

Making a mental to-do list of all of the things you wanted God to do or to provide for you, or fix,  in order to make your life better right here and now?

I have to confess I did this. And listen... if you are being honest, you had one of your own.  You may not have knelt beside your bed in your jammies after some warm milk and a bedtime story like I did, but you had a list.

So here's what I came up with, listed in no particular order...

Dear God, Here Are the Things I Think I Need...

Honestly... this is what I actually have been praying for...
From time to time I'll have people ask me, "Is it okay to pray for myself?  Isn't that selfish?"
That's a really good question.  How do we know what to pray for when we're praying for our own needs?  And when does it become self-serving and self-centered?
In the year 2000 Christian teacher and author Bruce Wilkinson published a little book entitled The Prayer of Jabez.
This book, which was based on an obscure passage of Scripture from 1 Chronicles, became a worldwide phenomenon, selling millions of copies, and served to perpetuate a widely accepted form of the prosperity gospel.
Wilkinson asserted that the prayer found in that obscure passage was one that would bring prosperity and "blessing" to anyone who prayed it every day as part of a  daily regimen of consistent prayers of petition to God.
Wilkinson says these verses contain “the key to a life of extraordinary favor with God” (p. 7). The logic runs something like this: Jabez prayed for blessing and got it, so we should pray for blessing, and we will get it.
He also noted that if Jabez had worked on Wall Street, he might have prayed, “Lord, increase the value of my investment portfolios” (p. 31).
But I am going to suggest that this passage is about so much more than stuff... It's about identity, capacity, and wholeness... It's about wanting more of what matters.  It's about keeping your prayers for yourself centered on God's purposes for your life, and re-framing what constitutes "blessings."
You see, in God's economy our blessings are entrusted to us for the sake of the world around us, and so are we.
It's hard to get this, however, when things are not going well for us, when we are feeling isolated, outside, unfinished, uncertain, messed up, broken...  you name it.
That's why I want us to hold on to this one very important thing:
You don't have to be defined by isolation, but you can be refined by it.
Our passage of Scripture today comes to us from the book of 1 Chronicles 4:9-10---just two verses right smack dab in the middle of a very long, boring genealogy.

9 Jabez was more honorable than his brothers. His mother had named him Jabez,[a] saying, “I gave birth to him in pain.” 10 Jabez cried out to the God of Israel, “Oh, that you would bless me and enlarge my territory! Let your hand be with me, and keep me from harm so that I will be free from pain.” And God granted his request.

So what do we know about this guy Jabez?
He appears to be without a father because, in the rest of the passage, everyone who is mentioned is always mentioned in connection to their father.  It's not clear why this is the case, but it is his mother who names him, and not his father.
Perhaps his father died shortly before he was born.  Or he left shortly before he was born.  We are not given any more information, but this fact would have made Jabez an outsider in many ways.
His mother essentially names him, "He makes me sorrowful."  Jabez' identity is wrapped up in pain and suffering.  His reality was one of isolation, rejection, self-loathing, shame...
And yet... and yet... he is included in the lineage of David.  So what's up?
How does a guy who is steeped in isolation, who is living with pain and suffering as an identity get an annotated mention in David's family tree?
It all comes down to this prayer:
“Oh, that you would bless me and enlarge my territory! Let your hand be with me, and keep me from harm so that I will be free from pain.”
The literal translation here for the words "enlarge my territory" is actually "stretch my tents."  Jabez comes from nomadic people who move from place to place, never really having a home other than the ones they carry with them... their tents.
You might take from this that Jabez is asking for a bigger footprint for his tent---more territory, more riches and power to go along with that territory.  That's certainly how Wilkinson interpreted this passage.  And if you interpret it this way you get a completely different kind of prayer.
But I want to keep going to the next line where Jabez, at least according to the English translation, is asking God to protect him and keep him from experiencing pain in life but there's more to the ancient Hebrew than that.
What Jabez is actually asking for when you do a close reading of the ancient Hebrew text is "Give me capacity."  Jabez asks for the capacity to endure the hardships of life, not to escape them.  He asks not to live an idyllic life but to live one filled with the joy that comes from resisting evil, and not letting the darkness win.
So you have to ask yourself now, "What kind of 'more' is Jabez really asking for here?"  It doesn't sound like an increase in his stock portfolio.
Jabez wants to be stretched, he wants to be expanded, he wants God to increase his capacity for everything---for trust, love, obedience, peace, joy...  that's the kind of more he wants.
This passage teaches us that God frequently stretches us beyond where we sunk our anchors.  It's the stretching that gives us the possibility for more capacity.
Jabez wasn't overcome by what could have become an identity marked by pain, suffering, and isolation... he transcended it.
So let me ask you something...
How are you being stretched right now?
If you haven't been... maybe it's time to step into this.  In all honesty, stepping into this could every well be your way forward out of the isolation and pain that you've been experiencing throughout this challenging season.
1.  Empathy for outsiders, the lost and alone...  where are they in your life?
2.  A heart for a world filled with more capacity for love and mercy... where is there more love and mercy needed right now, and how can you share it?
3.  Re-oriented toward what constitutes true "Blessings"...  what kinds of more do you want, really?
A daily prayer to start your day:
“Oh, that you would bless me and enlarge my territory! Let your hand be with me, and keep me from harm so that I will be free from pain.”
"God, stretch my tent.  Give me the capacity to transform pain into purpose.  Give me more of You so that I can become more myself for the sake of the world and your kingdom.  God, stretch my tent."
You don't have to be defined by isolation, but you can be refined by it.