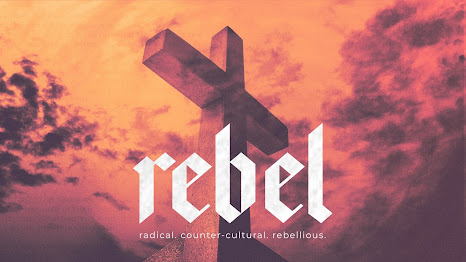 This week we are continuing the sermon series for the month of September, a series entitled Rebel.  Following Jesus isn’t easy.  It was never meant to be.  The Way of Christ sometimes demands a radical countercultural and even rebellious kind of sacrificial love.

The passage of Scripture we are going to be exploring today includes probably one of the most challenging and strange sayings of Jesus in the Gospels.  In this passage, Jesus presents a challenge to Christians not to be a bad example, what he calls a stumbling block.  We'll dig deeper into that in a moment.
But first, I thought I would share some images with you of some bad examples just so we can get ourselves into thinking mode about all of this... and they're funny.
You Had One Job - Images
The great author Victor Hugo once said, "No man is completely useless, he can always serve as a bad example."
You Had One Job...  This is a meme that makes its way into our culture over and again, doesn't it?  So let me ask you a question.  What is the "one job" Christians have?  I'll give you a hint, it's the vision of our church.
To Love God Love Everybody. That's our one job.
So, based on what you see going on in the world around you, how do you think that Christians are doing with their one job?  How's that going so far?
Here's a different question.  What are some ways that Christians have been stumbling blocks lately?  How have we been tripping people up?
When we speak for Jesus, but don't sound like Jesus.
When we weaponize the Bible.
When we exclude, rather than include.
When we're more concerned with a certain future for us than an uncertain present for people who are struggling.
More commonly, many Christians whittle down the great Gospel to some moral issue over which they can feel totally triumphant and superior, and which usually asks nothing of them personally - Rohr
What I've discovered lately is that for a lot of us Christians, when things get too difficult in terms of following Jesus, we just change what it means to follow Jesus... we re-define what it means to be a Christian.
And for the vast majority of Christians in America, that re-definition has very little to do with Jesus and everything to do with politics, worldview, and self-indulgence.
In his commentary on the passage of Scripture that we are about to read from Mark's Gospel, N.T. Wright said that we need to take seriously the threat of self-indulgence because there's a war on... a war for the soul of Christianity, a war for the soul of our society.
If we are going to truly follow Jesus, it means that we need to acknowledge the weight of the moment we are in right now, and we need to choose wisely.
We have one job.
To Love God and Love Everybody.
In order to do that job, we have to follow Jesus and following Jesus isn't easy.  Sometimes we have to let go of things that we hold dear, things we think we need to succeed in order to fully follow Jesus.
In fact, what I want you to know today is this one very simple, very disturbing and challenging idea:
Following Jesus is a Radical Choice.
Let's take a look at Mark 9:42-50:

Before we dig into this passage, let me give you a bit of context to this particular conversation.  This comes on the heels of two different things that the disciples bring to the table in their conversations with Jesus.

First, they want to find out from Jesus which one of them is going to be in charge when he takes over the world.  They're jockeying for position, trying to make sure that they have a spot secured in order to be important, rule over others, etc.

Second, they see a guy casting out demons in the name of Jesus and he isn't part of their crew.

Seemingly, this passage here is a response of sorts to all of those shenanigans.

So what is Jesus really saying here?  Does he really mean all of this?  Millstones around the neck and then tossed into the sea?  Cutting off limbs... plucking out eyes?

Jesus was merely musing metaphors of the day, but they were grounded in a harsh reality.  The Romans had recently executed some Galileans who had revolted by putting millstones around their necks and tossing them into the sea.  And they were also known for maiming people they questioned.

But Jesus uses a term that is quite unusual, Skandalon, which we interpret as "stumbling block" because that's the best way to describe what he's trying to say.  Jesus says that if you cause one of these "little ones" to stumble, you're in for it.

This word has a deeper meaning, though.  It's not just about tripping someone up. It's about the kind of danger that can be done by someone who refuses to acknowledge their position of privilege and who chips away at the faith of those who are vulnerable.

The "Little Ones" refer to those who are vulnerable, dehumanized, outside the status quo.  Jesus does not waffle in this.  He's like "You have one job!"

While we're here... Let me illuminate things a bit about HELL, which isn't really the word "hell" but rather then word Gehenna, which is the proper Hebrew name.  Gehenna was the garbage dump outside of the walls of Jerusalem.  Fire. Maggots. Child Sacrifice.

Jesus is drawing from familiar texts that many of his hearers would have brought to mind, a cheery verse that the prophet uses to describe Israel's enemies, captors, persecutors:

24 “And they will go out and look on the dead bodies of those who rebelled against me; the worms that eat them will not die, the fire that burns them will not be quenched, and they will be loathsome to all mankind.”

I know it sounds pretty awful, but this is the Hebrew Scriptures version of what happens to you when you neglect your one job.

Then there is this whole "Salted with fire" which feels a little like a mixed metaphor... because it is.  But Jesus is making a point here that is very important.  He wants to  make it clear that there is something important and transformative about doing your one job.

And this strange mixed metaphor uses two elements that speak of purification and preservation, of light and taste... In other words Jesus is saying the world around you is affected by you... so make sure you are doing everything you can to do your one job... no matter what it takes... no matter what it costs.

This passage teaches us that:

When the very things we hold dear and believe lead to abundant life become obstacles to others--it can get destructive.  We need to let them go.

It would be better for you to be diminished, humbled, halting, vulnerable... and to do your one job, than to be strong, whole, complete, confident, self-reliant and fail to Love God and Love Everybody because you're too busy loving yourself.

So how do we figure this out?

1.  Identify the vulnerable in our midst---to have awareness of who they are, what are their needs, why are they marginalized...

2.  Be honest about how are actions are affecting their "faith" -- this will necessitate repentance on our part.

3. Get rid of whatever we need to get rid of in order to foster abundance for all -- this may require sacrifice.

Don't make eye contact.  Don't say anything.  Don't do anything.

We aren't meant to live like this... with blinders on.  We have one job.