Indescribable - Week Three: For Such A Time As This 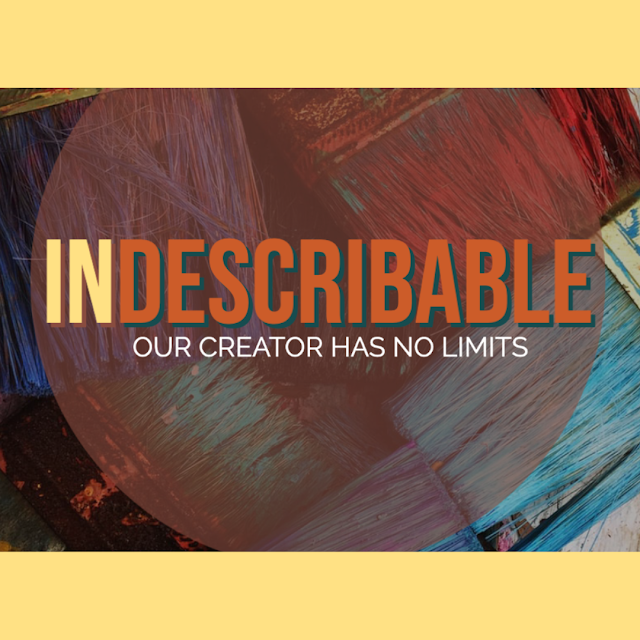 Today we are going to be continuing the sermon series Indescribable.

Everything around us gives us a glimpse of God’s creative impulses.  As image-bearers of God, we are given the opportunity to live into our God-given creative to embody God’s kingdom to the world around us.

Today we are going to be talking about something that is so relevant and important for each of us.  Let me introduce it with this question:

Did you know you have a particular and powerful purpose in life?

You might be thinking, "I would love to believe that Pastor Leon, but I'm just an ordinary person."  I  get that.  I feel it, too.
Let me share with you some ordinary people who changed the world.
Nils Bohlin - invented the seat belt
Henry Dunant - Nobel Peace Prize, Red Cross, Geneva Convention
Tank Man - Tianmenn Square
Lewis Latimer - carbon filaments for light bulbs, cooling, disenfecting hospitals
James Harrison - blood antibody for Rhesus - saved 2.4 million babies
Rosa Parks - protest because she was tired
What makes these people any different than you or me?  You could parse it forever trying to explain it away---arguing that they weren't ordinary, but until the moment of truth you would have seen nothing remarkable about any of them.
But when the moment of truth came---something clicked inside of them. And here's why:  They were perfectly positioned, uniquely qualified and emotionally ready for their moment.
So how do you know when your moment(s) of truth come?  And what will you do when they come---because they will?
Here's what I want you to know as we begin this journey together today:
You are created with divine purpose.
Today our guide will be coming to us from the Hebrew Scriptures and the book of Esther.  Now I'm not going to read the entire book to y'all (thank God right?) but I am going to tell the story, and we'll be focusing on one verse that is kind of the pivotal moment in that story.
To begin with we need to know a few things about the book of Esther.  It is set in during the dominance of the Persian Empire, when there were thousands of Jews living not only in Babylon, but also Susa, which was the Persian capital.
The dates the story is set in most likely are during the reign of Xerses I which was around 486 BCE.  The story was most likely written down or at the very least edited and popularized during the Seleucid period when Jews were being persecuted for being Jewish by their Syro-Grecian overlords.  The book of Daniel was also popularized during this time as well.
The book outlines the origins of the Feast of Purim, which is one of the few feast days in Israel that were not part of the original celebrations outlined in the Torah.
Characters: Esther, a young Jewish girl, Mordecai her cousin, Haman the vizier, Ahasuerus, the king.
The story follows a pattern that is found in the story of Joseph, the book of Daniel, and also in a similar story that was found in the Dead Sea Scrolls.  Young Israelite taken in by a pagan king, does well, is chosen, there's a villain, a threat to the Hebrew people, courage and then rescue.
But there's a sordid history attached to this story---a history of powerlessness, exploitation of women, potential genocide, ancient enmities and the reality of the context within which the story was widely spread to the Hebrew people.
Let's go through the details of the story to see how it plays out.
* Vashti - probably a composite character - was essential asked to disrobe in front of the drunken courtiers.
* They become worried that other women would defy their husbands - she is banished.
* Esther is part of a beauty pageant, selected with others.  Does not reveal her Jewishness.
* Mordecai - low level courtier conspires with her.
* Esther has her time with the king, and he become so enraptured with her that he makes her queen.
* Haman (Amalekite) is incensed by Mordecai’s refusal to bow before him (vizier) and begins to plot against him.
* Tricks Ahaseurus into condemning the Jews - “certain people” who are against you - even offers to pay for it.
* Mordecai mourns, word gets to Esther
14 For if you remain silent at this time, relief and deliverance for the Jews will arise from another place, but you and your father’s family will perish. And who knows but that you have come to your royal position for such a time as this?”
* Esther goes into the king unannounced, risks death, but he is won promises her half of his kingdom. She invites him and Haman to dinner.
* Haman encounters Mordecai again, his wife and friends tell him to build a gallows to hang Mordecai
* The king has a chronicle read and discovers that Mordecai had exposed a plot, but was not rewarded, asks Haman what he should do to honor a man who delights the king, Haman thinks its him. Parade through the streets led by the kings most trusted servant, wearing a royal robe, riding a royal horse.  Haman has to do it.
* At the second banquet, Esther enraged the king when she reveals her identity and the plot against her people.  Haman is hanged.
* The king gives the Jews the right to defend themselves, a feast is proclaimed, Mordecai becomes vizier, Esther is given all of Haman’s lands and money.
Let's go back to that key verse again:

14 For if you remain silent at this time, relief and deliverance for the Jews will arise from another place, but you and your father’s family will perish. And who knows but that you have come to your royal position for such a time as this?”

Esther teaches us that even though our circumstances might be less than ideal--they could very well be the moment we've been created for.
How do we figure this out?
1.  You realize you are perfectly positioned---How do you know if you are in the right place at the right time?  Holy Discontent.  You can't unsee what you've seen.  You can't shake the feeling.  You can't move on without serious regret.
2.  You realize you are uniquely qualified - God doesn't call the qualified, God qualifies the called.

In a very real sense, not one of us is qualified, but it seems that God continuously chooses the most unqualified to do his work, to bear his glory.  If we are qualified, we tend to think that we have done the job ourselves.

3. You find that you are emotionally ready---despite your fear, uncertainty... you know it's your time.  And this is manifest in the purity of your motivations.
Kelly said last week, "The world needs you."  Vulnerability leads us to the right emotional space---the ego is taken out.  Your motivations are purified from fear, pride, all aspects of the self.
Self aggrandizing removed. Self Interest removed.  Thoughts of glory removed.  Thoughts of credit removed.  Having the mind of Christ.
Where in your life right now are you finding yourself feeling holy discontent?
Issues of Race?
Homelessness?
Peacemaking?
Courageous Conversations?
Reconciliation?
Forgiveness?
Mercy?
"The readiness is all." Dying to self, to be raised to new life.
The world not only needs you, God does.  God needs you to be your truest and best self, to realize that you may very well have been created for "such a time as this."
You are created with divine purpose.