Indescribable Week One - No Limits 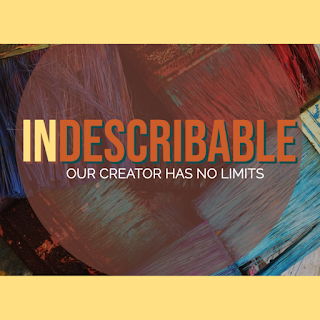 Today we are beginning a brand new sermon series entitled Indescribable, and we'll be spending the entire month of August learning about the limitless creativity of God and how that creativity is imprinted upon you and me, who are called to be co-creators with God.

Everything around us gives us a glimpse of God’s creative impulses.  As image-bearers of God, we are given the opportunity to live into our God-given creative to embody God’s kingdom to the world around us.

This sermon is going to focus on the limitless and ongoing creativity of God---and why that matters to you and me.

I want you to think of your favorite nature scene---a place that you may have visited before, or you have seen an image of it and it mesmerized you.  Here is a few that matter to me...

When you look at these photos, or you remember the scenes that are important to you... what do you think about them?  What sparks your curiosity?  Maybe you're like me, and you think... "It didn't have to be so beautiful... but it is."

Somehow ordinary things like minerals, elements, objects, formations, flora, fauna.... all of those ordinary things were brought together in just the right way and it became lovely---beyond belief lovely, am I right?

I started thinking about the idea of taking ordinary things and making them into something beautiful and discovered some incredible examples.  Where do we get the impulse to do this?
https://news.artnet.com/art-world/making-art-from-mundane-materials-900188

Maybe from the One who takes all of those ordinary things like minerals, elements, objects... and makes the world so beautiful and amazing?

The ancients (as we're going to read in a bit) believed that what was at stake was not especially God's creative impulses, but the fact that God would take what was chaotic, without form and was void---and would create order out of all of it.

It's easy to see why that would be so important for the ancients, who had little of the scientific explanations that we do for what would have felt like chaotic phenomena to them---eclipses, natural disasters, etc.

There may be order to God's world---but it is marked by unpredictability.  And it is unfinished.

God's world is an orderly world... but it is also an unpredictable world, a world capable of growth and change and surprise, or love and pain of glory and tragedy, not simply replication of what is, because it contains human beings who have the freedom to act.  And it is an unfinished world, waiting for human beings to complete God's work of creating.  - Torah commentary

God didn't put a period at the end of the sentence when God created.  Creation is an ongoing proposition.  And God didn't mean for the ongoing proposition of continued creation to be something that God alone was responsible for.  God wanted us to join with God in that work.

And what we discover when we begin to embrace our role is that not only were we created to create, but that There's No Limit To God's Creativity.

Our guide for this journey today is the first chapter of the book of Genesis.  I learned this past week from the Jewish Midrash (the teachings about the Hebrew Scriptures) that "Whoever teaches a child the Torah's account of Creation is to be considered as having created the world personally."
So let's create...
Before we begin, I need you to know this.  Genesis chapter 1 is not science, but poetry, and it is rooted in faith rather than biological facts.   This account communicates truth through stories and poetry.

The creation story in Genesis is dated by most scholars as having been written around the 6th century BCE during the time of the Babylonian captivity.  The stories were compiled and edited as a response to the Babylonian narratives.

The Babylonian account of creation describes the thunder god, Marduk who violently kills a water goddess named Tiamat and uses her broken body to form the earth and the sky.

God, in contrast, creates through speech, not bloodshed, and out of delight, not destruction.  And we are called to imitate God in the care and nurture of creation.
1 In the beginning God created the heavens and the earth. 2 Now the earth was formless and empty, darkness was over the surface of the deep, and the Spirit of God was hovering over the waters.
3 And God said, “Let there be light,” and there was light. 4 God saw that the light was good, and he separated the light from the darkness. 5 God called the light “day,” and the darkness he called “night.” And there was evening, and there was morning—the first day.
Day Two:  The separation of the waters
Day Three: Land and vegetation.
Day Four: Fish and Birds.
Day Five:
Day Six:  Animals & Humans
27 So God created mankind in his own image,
in the image of God he created them;
male and female he created them.
28 God blessed them and said to them, “Be fruitful and increase in number; fill the earth and subdue it. Rule over the fish in the sea and the birds in the sky and over every living creature that moves on the ground.”
29 Then God said, “I give you every seed-bearing plant on the face of the whole earth and every tree that has fruit with seed in it. They will be yours for food. 30 And to all the beasts of the earth and all the birds in the sky and all the creatures that move along the ground—everything that has the breath of life in it—I give every green plant for food.” And it was so.
31 God saw all that he had made, and it was very good. And there was evening, and there was morning—the sixth day.
Human beings create,  name, and bless--reflecting God's creative potential.

The liturgy of Genesis 1 affirms that creation is neither fixed nor settled... God is at work to bring creation to its purpose.

Theology of blessing - The blessing God has ordained into the processes of human life.  It defines reality in an artistic and aesthetic way.  The blessed world is indeed the world that God intended.  Delighting in the creation, God will neither abandon it nor withdraw its permit of freedom.

Rest requires creating a clearing that is free of all the surrounding clutter.
The dominion mentioned in Genesis 1:26 is meant to be exercised in a community of love, not in individual dominion.  We are invited to help heal broken relationships and bring them into dominion under God.  Though the world’s problems will not be solved this side of heaven, resolution of the problems of the world is meant to be begun now. - Willard
What does this look like?
Intelligence - don't check your brain at the door.
Energy - don't get weary in doing good.
Imagination - keep dreaming, holy imagination is your secret weapon against Evil.
Love - hesed the kind that never runs out.
Ordination vows for all of us.
Am I demonstrating God's shalom-filled, peaceable kingdom by my actions?
Am I  weaving a narrative of delight or destruction?
Am I willing to be a co-creator with God?

THERE’S NO LIMITS TO GOD’S CREATIVITY