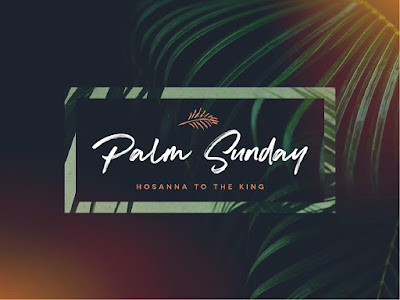 It's the beginning of Holy Week---sometimes called the "Week of Weeks" in the Christian tradition.

It's the week that we celebrate what defines us as Christ-followers: The Resurrection. Christians are called to live into the hope that identifies us as Resurrection People: the hope of resurrection and restoration for all of Creation.

The Church is called to embody what it looks like when the Shalom or Peace of God in Christ rests over all things.

And today is Palm Sunday a time for the waving of palms, the shouting of "Hosanna!" It's that moment when, if you have no idea why Christians do the things that Christians do, you wonder if they have lost their ever-loving mind.

So why do we do this?  It's all because of a story that we find in each of the Gospel accounts--the story of Jesus' Triumphal Entry into Jerusalem.  Let's read Matthew's version of this story from the Gospel of Matthew chapter 21:1-11.

1 As they approached Jerusalem and came to Bethphage on the Mount of Olives, Jesus sent two disciples, 2 saying to them, “Go to the village ahead of you, and at once you will find a donkey tied there, with her colt by her. Untie them and bring them to me. 3 If anyone says anything to you, say that the Lord needs them, and he will send them right away.”

5 “Say to Daughter Zion,
‘See, your king comes to you,
gentle and riding on a donkey,
and on a colt, the foal of a donkey.’”

“Blessed is he who comes in the name of the Lord!”

“Hosanna in the highest heaven!”

Let's set the scene for this story.  It's the first century in Jerusalem a city that will swell in size from about half a million people to perhaps twice that during Passover.

Prior to Passover the Roman governor Pontius Pilate entered into the city with a large contingency of soldiers, some on horseback and others on foot---traveling from their headquarters at Caesarea Maritima on the coast.

Pilate himself was at the head of the procession on a huge white charger, the kind of horse reserved for a man of his stature.

He and his battalions would join soldiers who were permanently stationed at what was known as the Antonio Fortress, a massive structure on the Temple Mount that overlooked the porticos beneath... all so the soldiers could keep an eye on things.

Pilate came to demonstrate the military might of the Roman Empire, and to ensure that everyone knew if there was unrest, the Roman army would quash it.

Jesus entered in a different way through the Eastern Gate which stood opposite the Mt Of Olives.  He entered the city riding on a donkey, not a huge white horse.  He was surrounded by his followers, working class people, unarmed and waving palms, and throwing their cloaks down in front of him.

Soon the crowd gathered for Passover began to line the streets and to mimic the disciples.  They shouted "Hosanna!" a word that means "Save us now!"

It was a fulfillment of prophecy from the prophet Zechariah... quote

But it was also something much more.

This is a scene that resonates with our culture.  We like this Jesus because we like winners.  The great coach of the Green Bay Packers, Vince Lombardi, famously said, "Winning isn't everything, it's the ONLY thing."  No one remembers who came in second.  Champions get the t-shirts and hats in our culture just like they got palm fronds and ivy wreaths in the ancient world.  To quote that great contemporary theologian Ricky Bobby, "If you ain't first, you're last."  There.  I threw down a Talladega Nights reference.

Ironically, if you Google the word "winning" right now, the first thing that pops up is "Charlie Sheen"

Here's the thing: A life worth living isn't based on winning.  That's the lesson the palms teach us.

Maybe you want a win right about now.  Maybe you're tired of losing.  You're thinking to yourself, "If I could just win the lottery ONCE, that would solve a lot of problems."  Personally I think the Lottery is a tax on people who can't do math, but you can dream, right?

The problem is that these people missed the point with Jesus.  They had all of the notes and none of the music.  They had the rules without the relationship.  They didn't realize that knowing the truth and doing the truth are two different things.  I read that a professor asked his students, "Is it possible to make an A+ in the course of ethics and still flunk out in life?"  Is it possible to get all of the Christian "stuff" down pat, and still miss the point about how life isn't all about "winning?"  You bet.

After the Resurrection, the symbol of the palms changed for the early Christians.  They used it to signify victory over the enemies of the soul.  Martyrs were pictured as holding palm fronds because it demonstrated how Christ had defeated sin and death, and they had nothing to fear.

So which palm are you waving as Jesus enters our lives during this Week of Weeks?  Does your palm symbolize how you would really like Jesus to make your life better... to "fix" the things that are wrong? To give you a "win?"

Or are you waving the palm that symbolizes how nothing---not sin, not death, not anything--can really defeat you because Jesus is risen... that true victory isn't about "winning?"

Where are you in the story?  Are you celebrating Jesus today and ready to crucify him on Friday because he doesn't meet your expectations?  Are you throwing your cloak down in the road in front of him now, but all too ready to deny you even know him later?

A life worth living isn't based on winning.