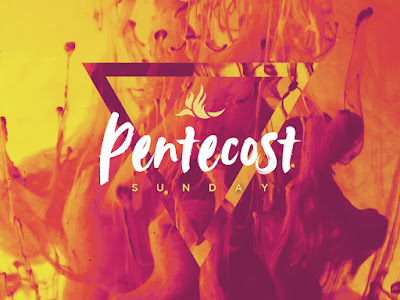 Today is Pentecost Sunday--the birthday of the Church!

We read the story of that day from the book of Acts just a moment or two ago, but we need to set the stage as to why that day was so important, and why we are here celebrating it today.

The passage began with this line:

1 When the day of Pentecost came, they were all together in one place.  2 Suddenly a sound like the blowing of a violent wind came from heaven and filled the whole house where they were sitting. 3 They saw what seemed to be tongues of fire that separated and came to rest on each of them. 4 All of them were filled with the Holy Spirit and began to speak in other tongues as the Spirit enabled them.

And then there is this line after that:

5 Now there were staying in Jerusalem God-fearing Jews from every nation under heaven. 6 When they heard this sound, a crowd came together in bewilderment, because each one heard their own language being spoken.

So what was happening here?  Why were there so many people gathered in Jerusalem?  And what is up with the timing of all of this?

The Feast of Pentecost is also known as The Feast of Shavuot, or the Feast of Weeks.  It was the celebration of the giving of the Law.  It occurred 50 days after Passover when the Hebrew people escaped Egypt.

Acts 2  is basically a re-telling of the Creation story, there was the ruach or Spirit of God that was present over the chaos of Creation as God created order out of the chaos.

In a similar way, out of the uncertainty that those first disciples felt,  a sense of direction and purpose emerged, and moved them forward.  The Church was created out of chaos by the power of the Spirit.

And then there is the interesting bit about how thousands of people who were gathered in Jerusalem heard the Good News of Jesus in their own language.  Let's dig into that a bit.

There is this ancient rabbinical teaching about how when the Torah or the Covenant was given by God at Sinai, God spoke in 70 languages, which was supposed to represent the 70 known nations at the time, but that it was only Israel who listened.

In Acts we see God delighting in diversity, sharing the Good News to everyone in their own language--one story told scores of different ways but all with the same hopeful outcome:  Jesus is Risen, we don't have to be afraid.

At this moment we have a re-telling of the Tower of Babel story--the story in Genesis that explains why there are so many different languages.

The Tower of Babel story is a story that is grounded in the pride and arrogance that comes from the desire for uniformity, nationalism, and humanistic hubris.

It begins with a weird question.  "What happens when people think they can build a tower to God?"

And as we dig deeper into this story from the book of Genesis, we're going to discover why God picked that day on the Feast of Pentecost to unleash the power of the creative, wild Spirit on those disciples who became the Church.

Here's what I want us to hold on to today--the one main idea that is going to weave its way through the whole sermon:

Let's dig into the text for today which comes to us from the book of Genesis 11:1-9

1 Now the whole world had one language and a common speech. 2 As people moved eastward,[a] they found a plain in Shinar[b] and settled there.

So at this point, the text tells us that the whole world had one language and a common speech, which actually leads them into trouble.  The lack of diversity led to illusions of sovereignty, and then they decide to settle and build cities.

3 They said to each other, “Come, let’s make bricks and bake them thoroughly.” They used brick instead of stone, and tar for mortar. 4 Then they said, “Come, let us build ourselves a city, with a tower that reaches to the heavens, so that we may make a name for ourselves; otherwise we will be scattered over the face of the whole earth.”

This is also a story about the problems of technology.  The technology here is the brick, which changes everything.  Suddenly people can build cities, towers, they can make a name for themselves.  They begin to believe that they are divine, on par with God.

5 But the Lord came down to see the city and the tower the people were building.

This is some straight up awesome Hebrew humor here.

6 The Lord said, “If as one people speaking the same language they have begun to do this, then nothing they plan to do will be impossible for them. 7 Come, let us go down and confuse their language so they will not understand each other.”

One way of reading this story is that the Lord saw diversity as a cure for a full-on power grab.   The word Babel means confused.

Now, let's fast forward to Acts and the passage that we read earlier:

6 When they heard this sound, a crowd came together in bewilderment, because each one heard their own language being spoken.

It's clear that the story of Babel is factoring into this story in the book of Acts, as the author of Acts is seeing how God was essentially re-telling the story of Genesis, moving toward the delivery of a new covenant to the people of God.

But the people who are hearing this message in the book of Acts are no different than the people from the story of Babel.  They had built their own towers of isolation and superiority.  They were chosen, they had an amazing temple, they were favored...

Only this time when the new covenant is spoken in 70 languages it's understood in 70 languages.  The Jews who heard and believed were then able to go back and share their stories in their own language all over the world.  It's clear that God values diversity and wants this Good News to be heard in all of those languages for all the nations.

The message here is that God is constantly transforming all things, making them new.  And that we are constantly struggling, constantly needing to hear the Good News delivered to us in our own languages, which keep on changing, too.

It's hard not to see the similarities in these stories to our own.  Both in Genesis and in Acts people were struggling with the advent of technology, fear of diversity and a desire to take matters into our own hands.  So are we.

And like the book of Acts, we still have our Caesars who demand to be called Lord.  We're still building towers, aren't we?  Still trying to reach God, to be like God, to show just how much we don't need God.

So what are the towers in your life?

How's that working for you?

Styx was one of my favorite bands when I was a kid.  They had a song entitled "Nothing Ever Goes As Planned" which had these lyrics:

'Cause, nothing ever goes as planned
It's a hell of a notion
Even Pharaohs turn to sand
Like a drop in the ocean
You're so together and you act so civilized
But every time that things go wrong you're still surprised
You've done your duty, you've paid a fortune in dues
Still got those Mother Nature's Blues

It's time to leave the tower building business and embrace the Spirit.  It's time to let yourself be transformed into a fully engaged follower of Jesus.  It's time to stop playing at being a Christian and be filled with the fire that consumes you and spills you out in the world to share your story as only you can tell it.

Don't waste your time building towers when all God desires is transformation.