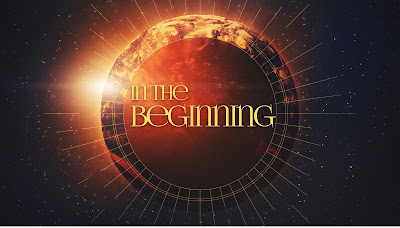 This week we are continuing our sermon series entitled "In The Beginning" a study of the first few chapters of Genesis and the story of Creation.

Before we get started today, I need everyone to do me a favor and draw something. You have paper in front of you, so pick it up and take just a few moments and draw the first thing that comes to mind.

Now that you've had a chance to sketch something--share it with the person next to you.
Now I want you to look at your neighbors sketch, and say the following with some measure of enthusiasm:  "I don't know if it's art, but I like it!"

Why did we just do that?

Because I have a point I need to make, and I needed you to connect with your inner kindergartner, which is how some of you felt right then as you tried to draw.  Some years ago, I conducted a scientific poll of a group of kindergartners.  I asked a whole group of them this question:  How many of you are artists?

Guess how many of them raised their hands?  All of them, that's how many.

And we believed it--at least at some level.

When did that happen for you?  When did you start to lose your optimism about your full potential.

If you remember from last week's sermon---we learned something very important:  We are embedded with God's DNA, with God's creative potential and God's desire and joy to create.  But somewhere along the way we were told a different story, and we've heard that story for so long that we started to believe it.

But what God wanted all along from humankind was something so beautiful, simple and life-giving.  Listen to this because it's the one thing that I want you to walk out of here today holding on to tightly.

Let's see how this is spelled out in Genesis chapter 1:26-31

26 Then God said, “Let us make mankind in our image, in our likeness, so that they may rule over the fish in the sea and the birds in the sky, over the livestock and all the wild animals,[a] and over all the creatures that move along the ground.”

27 So God created mankind in his own image,
in the image of God he created them;
male and female he created them.
28 God blessed them and said to them, “Be fruitful and increase in number; fill the earth and subdue it. Rule over the fish in the sea and the birds in the sky and over every living creature that moves on the ground.”

29 Then God said, “I give you every seed-bearing plant on the face of the whole earth and every tree that has fruit with seed in it. They will be yours for food. 30 And to all the beasts of the earth and all the birds in the sky and all the creatures that move along the ground—everything that has the breath of life in it—I give every green plant for food.” And it was so.


31 God saw all that he had made, and it was very good. And there was evening, and there was morning—the sixth day.

What can we learn from this that will help us connect with what I just said--about how God created us to bear God's image and make God known?

For starters, we see in this text that from the beginning God chooses not to be alone in the universe when it comes to possessing creative impulses, desire and potential.  In fact, God is seen here as the Supreme Delegator--imparting the gifts of co-creation on human beings.

Secondly, and this is super important, we see that when God creates in God's image it's both men and women that reflect that image.  Male and Female--the whole of the human race best and more fully represents God's image on earth.

And this is fairly awesome---As we are trying to figure out exactly what the Scripture means by image (because when we think of the word image, we think of the way things look, which is just part of the equation) we have to take into consideration the world of the ancient Near East within which this story would have been told.

In the ancient Near East, a king was said to be the "image" of whatever god his people worshipped. In other words, he represented the god on earth, was the embodiment of that god and helped make that god known to his people.

So... and make sure you are with me on this... The ancient Hebrew understanding of this text was that to be made in the image of God was to be not only embedded with the good character and divine traits of God---that creative DNA---but also to be the bearer of God's image on earth.

This text teaches us that humans are given the task of making God known---to one another, and to all of Creation.

The first century Rabbi Akiva ben Josef, one of the greatest rabbis in all of Jewish history had this to say about this passage and what it means to be created in God's image:

What did Akiva mean by this?

He meant that to know you are created in God's image---don't miss this---gives you a sense of yourself and others that can change the way you see the world.

Rabbi Simeon Ben Azzai, who followed Akiva as one of the great rabbis of the second century, picked up his teaching and carried it forward.  He said, "When you curse your fellow man, or wish him to be humiliated," you essentially curse the image of God within him, and yourself.

So... It's a gift to know that you are created in God's image because it gives you a true sense of your worth and your potential... potential that you knew you had when you were small, and hadn't been told you were less than.

And it's a gift to know that you are created in God's image because it helps you see the worth of others as you recognize and bless the image of God within them.

Are you with me?

"In the same way let your light... your creativity... your passion... your God DNA... so shine before others that they would see your good work and glorify your Father who is in heaven."

When we begin to see the image of God in one another and ourselves... It's a game-changer.

I want you to watch a video that helps illustrate this...

Stop denying the image of God in yourself and others.

Begin to see the world through God's own loving, creative eyes.

You are created in God's image.

Go out into the world and make God known.

Creation image of God in the beginning leon bloder presbymusings