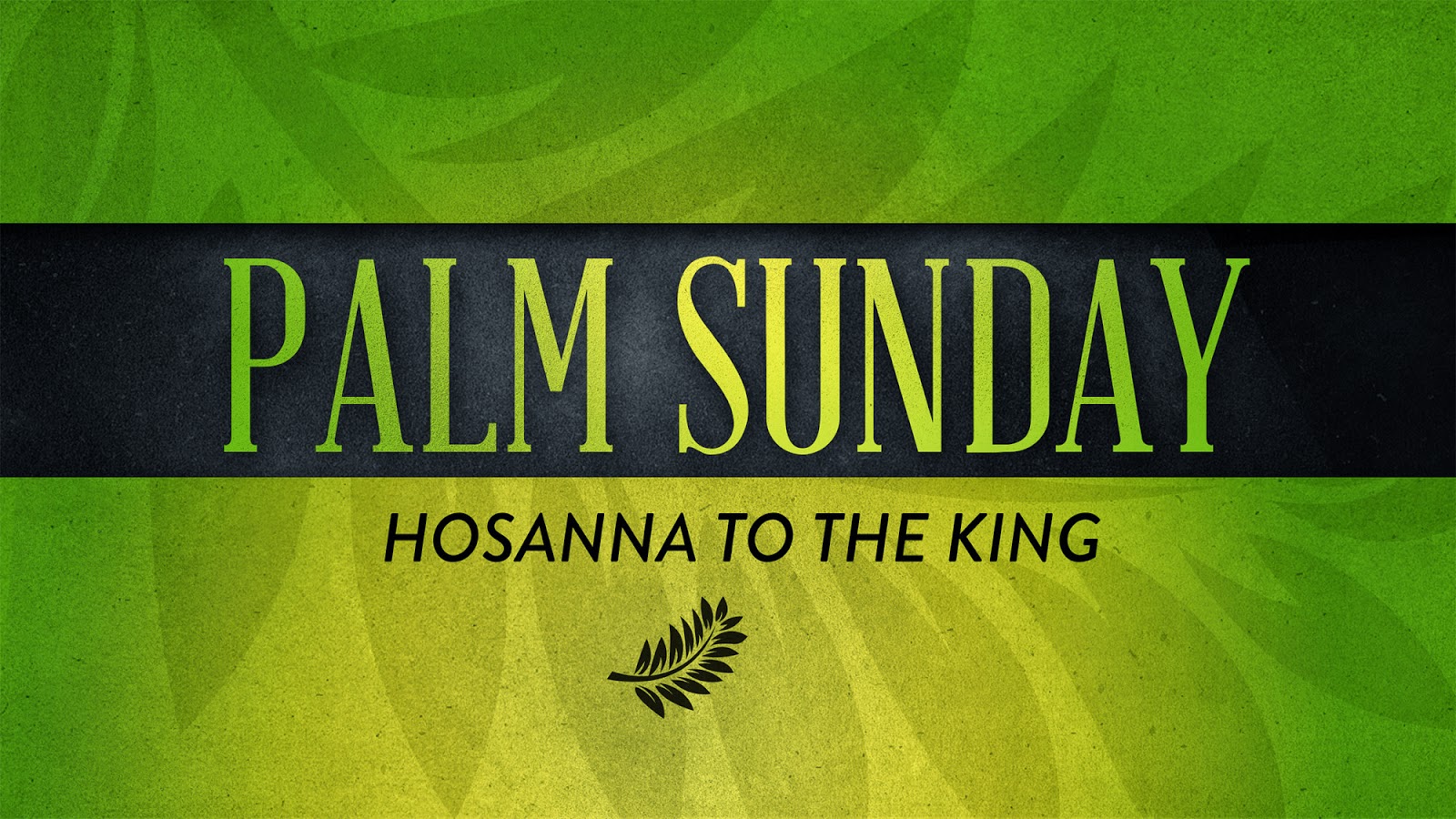 Today is Palm Sunday--the Sunday before Easter, the day when we celebrate the beginning of Holy Week with the waving of palms, singing of songs, and other assorted awesomeness.

Did you know that the moment before the moment is the most important moment?

But it's the moment before the moment that's actually the most important---moment.

That moment--the moment before the moment was the most important moment.  Because in that moment you made your decision to either step off the board, or climb back down.

Or when you first started riding your bike and you stood at the top of a hill--the first hill that you had ever biked down in your life.  And you swayed there unsteadily, wavering before your feet pumped the pedals down and you began to descend.

That moment--the moment before the moment was the most important moment.

When you took that first solo trip in a car when you first started driving... That moment when you sat there behind the wheel just for a second before you let off of the brake.  That moment--the moment before the moment was the most important moment.

That first kiss.  Remember it?  Your stomach was in knots, you didn't even know what you were saying, how you sounded--and all of the things that went through your head then... so many thoughts about the way things felt, sounded, smelled--doubts, fears, wonder, desire.

That moment--the moment before the moment was the most important moment.

I have my own moments.

The day I was married--I remember waking up at the crack of dawn, and trying to sneak past my parents so they wouldn't know that I was running off to get married.  I felt like my heart was going to push through my chest.

When my children were born--there was that moment when you just knew that once it happened everything was going to be different.

The first sermon I preached here at this church--the night before I stood in the Sanctuary in the dark and just listened to myself breathe and I prayed.

Just recently, I stood outside the sanctuary of the East Liberty Presbyterian Church waiting to walk inside and receive my Doctoral degree after three years of struggle. I could hear the piper inside playing Scotland the Brave and the organ was soaring through the pipes.  I felt such a lump in my throat--and then we walked inside...

In those moments is an eternity of decision--and how you respond makes all of the difference.

Because in the moment before the moment is when you choose to step forward or step backward--to step off the board or climb down the ladder.  You can either say later, "I had my moment and I took it." or "I missed my moment... It was right there and I missed it."

The story of Palm Sunday in the Gospels is a story about the moment before the moment.

Let's read the version of the story that is found in John today:

12 The next day the great crowd that had come for the festival heard that Jesus was on his way to Jerusalem. 13 They took palm branches and went out to meet him, shouting,

“Hosanna!”
“Blessed is he who comes in the name of the Lord!”
“Blessed is the king of Israel!”
14 Jesus found a young donkey and sat on it, as it is written:

This story is special--it appears in all four of the Gospel accounts, so clearly it was very important to the early Christians.  But why it was important enough to make it into all of the Gospel stories is something that requires a little digging.

The story tells us here that the people who met Jesus as he came into Jerusalem with his disciples hailed him as a liberating hero.  It's pretty clear that Jesus orchestrated his arrival in a particular way. The people celebrate his arrival by waving palms, which were a symbol of national pride and triumph dating back to a time when Israel won it's freedom during the Maccabbean revolt.

This was like a bunch of people in our time and space at a downtown parade--all waving American flags and singing God Bless America.

The Psalm they were singing was Psalm 118, which is considered a Royal Psalm, a song of triumph sung by people hailing a conquering king.

Interestingly, John corrects their misguided view of Jesus here by referencing Zephaniah 9 which prophesies that the messiah will not come as a conquering king on a horse, but as a humble man on a donkey.  What John was doing was indicating clearly that what the people were experiencing was the very presence of God, not a military leader.

A little later in the chapter the Pharisees say that the "whole world" is going after "this fellow," which is a nice touch by John.  Because Jesus did come to redeem the whole world, as he indicated in John chapter 3.

For Jesus it was the moment before the moment because this connected him to prophecy that was being fulfilled as he rode through the Eastern Gates of Jerusalem.

The Sovereign Lord has given me a well-instructed tongue,
to know the word that sustains the weary.
He wakens me morning by morning,
wakens my ear to listen like one being instructed.
5 The Sovereign Lord has opened my ears;
I have not been rebellious,
I have not turned away.
6 I offered my back to those who beat me,
my cheeks to those who pulled out my beard;
I did not hide my face
from mocking and spitting.
7 Because the Sovereign Lord helps me,
I will not be disgraced.
Therefore have I set my face like flint,
and I know I will not be put to shame.
8 He who vindicates me is near.
Who then will bring charges against me?
Let us face each other!
Who is my accuser?
Let him confront me!
9 It is the Sovereign Lord who helps me.
Who will condemn me?
They will all wear out like a garment;
the moths will eat them up.

The Suffering Servant in Isaiah is offering hope to the exiled people of Israel in Babylon, but the prophecy extends to Jesus, the Suffering Servant for the whole world.  Jesus brings hope to all of us who are exiled by sin and death.  And like the Servant in Isaiah, Jesus knows what will happen.  They will reject him, humiliate him, beat him... He will have to absorb their hate even while he is loving them--to the end.

So he sets his face like flint.  He takes a breath, gets on the donkey and rides into the city.  He knows that when he does, that things will be set in motion that can't be undone.

It's the moment before the moment, and Jesus doesn't waver.

For the Crowd it was the moment before the moment, too.

As I mentioned earlier, in the Isaiah passage the Suffering Servant is speaking to exiles, people who have been living for too long in Babylon.  They have forgotten what it was like to be truly free.  And they have gotten comfortable with the way things are and are afraid of a future that is uncertain.

So they reject the Suffering Servant, and beat him for bringing them the message.

The crowd welcoming Jesus is in the midst of such a moment.  The Messiah they want isn't the Messiah they got.  When they realize this, they turn on him.  They are enslaved by sin and death in addition to the Romans, but they choose slavery over freedom, and not only reject God's Servant, they execute him.

Brothers and Sisters... Palm Sunday isn't about a party--it's about triumph.  The kids were cute, the music was awesome, but this wasn't about any of that.  The reasons why this story has been so huge for Christians throughout the centuries, even those earliest Christians who were the closest to the story is because it is a liturgical remembrance.

We remember that Christ is entering the gates of our lives...  The Messiah is riding through our streets... He is here now, among us, challenging us with this moment.

We remember that this is the moment before the moment.

You have a choice to make.

Jesus is here.  Which way will you step?  Will you follow him?

For some of you--this isn't the first time that you've had this moment before the moment with Jesus.  You've had them before.  Maybe you chose not to step forward all of those other times.  You turned back.  You climbed down the ladder.

And you missed the moment.

How many of the moments do you think you might get?

If you had only made the right choice during the moment before the moment.

Today is your moment.