In The Beginning - Week One: And God Said 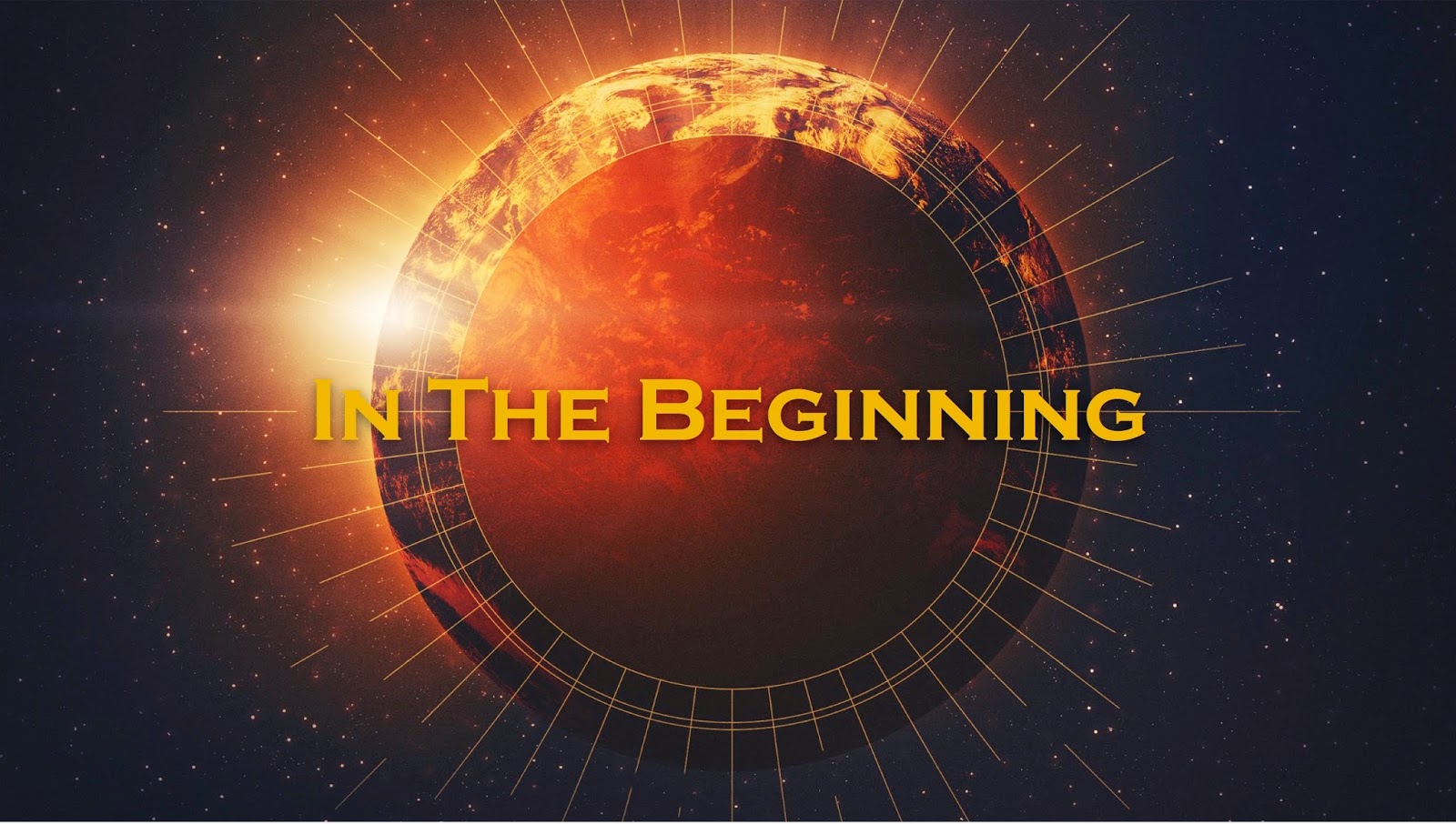 I was looking for some information on New Year's Resolutions on the interwebs and I found one linked to usa.gov.  It touted the top New Year's resolutions that people make--quitting smoking, losing weight, starting a new career, furthering education  and the like.  It also provided links for each one of those resolutions to government websites where you could find help on how to keep those resolutions.

Perhaps a less cynical person would see this as a creative way for the U.S. government to connect people with government services that might help make their lives better.

Unfortunately, I am not that less cynical person.  As I read through the site, I was reminded of that old punchline, "Hi, we're from the government and we're here to help you."  How bad have things gotten in our society when you have to go to the government to help you keep your New Year's resolutions?

I overheard some folks in our church talking about this the other day when I was eavesdropping in on their conversation.  One person said, "I don't even bother making New Year's resolutions.  You shouldn't have to have a New Year's resolution to do something--you should just do it."   I admire that kind of spunk and spitfirededness.   Sadly, that kind of attitude is much more theory than practice for most of us.

Clearly, we need a new approach to the whole New Year's resolution thing.

Maybe the reason why we have such a hard time keeping our New Year's resolutions is because our sights are set too darned low--we're only focusing on making ourselves better, and generally on our own terms.

There is something deep inside each and every one of us that longs for this--that longs to not just develop better habits, lose weight, quit smoking and such, but to become a new creation.  And further, to not just make ourselves better, but help make the world a better place.  To take what's broken in our world and re-imagine it, re-new it and re-create it.

There is an artist named October Jones, who had to commute on a train every day to and from work.  It was boring.  No one really speaks to anyone on the trains in big cities.  You keep your head down, listen to your head phones, read your paper or go to sleep.  Not October.  He creates cartoon heads and puts them on real people.  How?  Check out this story:

Here's a deep and abiding question or two:  "Where do our creative impulses come from?  Where do we get our impulse to create?"  Where did October Jones get the idea to turn a boring, mindless, soul-sucking exercise into something creative and vibrant?

Why do we watch shows where people take old, nasty houses demolish them inside and out, and then turn them into homes where most of us could imagine our selves living?

Why do we make New Year's resolutions, or at the very least view the new year as a fresh start, a new beginning so that we can undo all the mistakes in the previous year... reverse time so to speak... do things differently with a second chance?

I think the best place to begin---is in the beginning.  Genesis chapter 1, to be more precise.  I am not going to reprint the entire chapter, just a few of the verses...

To begin with, according to the text, things were "formless" and "empty." The Hebrew words here also connote "waste," "useless," and "confused."  Then God creates.  The Hebrew word in Genesis 1:1 for create is bara which is used uniquely to describe the kind of creativity that is reserved for the divine.  In other words, only God could pull of something like this.

What we need to know, first and foremost, is that Genesis is not a guide to cosmology.  Even ancient rabbis knew this.  The overriding theme, the concern of the book is a moral one--the relationship between God and humankind, particularly those who would be called children of God.

When the scripture tells us that "God said," that's not a cosmological statement--it's a theological one.  The ancients were concerned to note that God created the world with his words.  He announced his divine intentions by speaking, shattering the cosmic silence and beginning what would eventually create order out of chaos.

Because God "said," it personalizes it.  This was not an accident.  It may have been a "big bang," but it was the big bang sound of God's voice expressing God's intent desire to create.  This was not the act of an indifferent being, but one who was intimately involved in creation.

In the ancient world, something was thought to exist when it had a role to play in the world, when it had purpose.  The way to identify that role was to name whatever it was that was being spoken into existence.  And the only way to name something was to use words.  For the ancients, the fact that God spoke, imbedded meaning in everything.

The text also describes God as saying "let" quite often.  "Let us create..." "Let there be..." and so on.  The use of the word let here implies that the act of creation is not completed.  God is leaving room for creaturely response as God creates.  God is imbedding all of creation with the potential to continue the act of creation.

Additionally, God calls his creation good, which implies that reality itself is imbued with God's goodness and the potential inherent in this fact.  Simply put, God planted God's DNA in all of creation--including you, and me.

There's something else going on in this short but powerful passage.  The name used for God in this text is Elohim, which is actually a plural noun. In other ancient cultures the use of this term for a deity implied that there was a boundless creative potential in the deity--the ability, desire and skill to create in unimaginable ways.  The ancient Israelites incorporated this term to describe the unnameable God above all gods--the God whose creative impulses knew no bounds.

And then if that wasn't enough--rabbis who have studied this passage over the years have written about the importance of the first word used in the passage--b'reishit. This word is the first of seven words in the first verse, and it actually doesn't begin with the first letter of the Hebrew alphabet, it begins with the second--the word bet.  The letter bet is closed on three sides and open on one--with the open side pointing forward, if you will.  The rabbis said this indicates an open ended story--that looks forward and not backward.

So what does all of this mean--to you?

The reason why you want to see all the ugly, hard, horrible things in this world made new...

This new year, instead of focusing on how much weight you want to lose, why not aim higher?  Lose weight, for sure, but use your time, talent and your treasure to help feed people who can't afford a decent meal.

Instead of focusing on how you want to read more and spend less time watching TV, why not aim higher?  Read, for sure, but use your time, talent and your treasure to pour into the lives of children who are having a hard time learning to read.

Are you starting to see it?

You were meant for so much more than self-help.

Don't get me wrong, you should care for yourself and the mind, body and spirit that God has given to you.  But that shouldn't be you only concern because if it is your only concern, you are denying the very creative spirit of God within you.

This new year is not just a chance to make new resolutions, it's a chance for a new creation.