Book Review: The Zimzum of Love 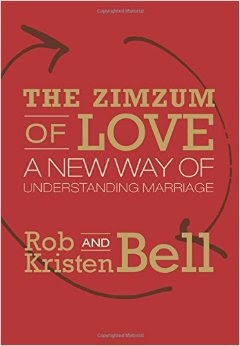 For those of you who know me by now, I've been a big fan of the work of pastor, author and speaker Rob Bell for years.  I've attended four of his conferences, read all of his books, bought all of his videos and I even have a t-shirt I bought at some event he did somewhere.  Listen, Rob actually knows me by name and not because I'm some weird stalker, although those last few sentences might indicate otherwise.

But my affinity for all things Rob Bell has associated me with a particular strata of Jesus-follower--the kind that are summarily dismissed by most conservative, evangelical Christians.  Where you stand on liking or disliking Rob Bell is now up there with abortion and gay rights as a means of identifying where you land on the conservative/liberal theological continuum.

This is unfortunate.  Because Rob has written some amazing things that have spoken to so many people who were trying to figure out what it means to believe and follow God.  His work scares more traditional Christian-y people because they honestly misunderstand what he's trying to do.  Rob doesn't write Christian-y books for Christian-y people.  He's definitely a Christian, and has a very high view of the Bible--higher, I would say than many people who claim the Bible as their authority for faith and life.

Rob writes books for people who used to know God, who don't believe in God, who have decided that God isn't for them... and for those of us who want so desperately to have better words to talk about God to people who need to know God better.

And this leads me to Rob's latest book--which he wrote with his wife Kristen.

Rob & Kristen Bell's new book The Zimzum of Love: A New Way of Understanding Marriage is a book on marriage written by two Christians, who are writing to all kinds of people regardless of their beliefs.  It is a book about the energy that exists between two people when they come together in marriage--energy that is responsive, dynamic, exclusive and sacred.  It is a book that lifts up marriage not so much as an institution, but as a life-giving, transformative, energetic, generative miracle.  In their own words Rob and Karen want "more" marriages and "better" marriages.  Their purpose in writing this book was to help people understand marriage as a zimzum.

Zimzum, according to Rob and Kristen, "is a Hebrew word used in the rabbinic tradition to talk about the creation of the world..."  The idea is that before the creation of the world there was only God, only the divine.  And when God began to create, God needed to create space for what wasn't God.  The word they came up with for this was tzimtzum--what Rob & Kristen call the "divine contraction."  God "contracts" Godself so that "everything we know to be everything can exist and thrive."

To that end, the zimzum of marriage is when you create space for another to thrive while they are doing the same thing for you.  And this interaction creates something that did not exist before.  This is more than just simple "give" and "take." It's beautiful, mysterious and awesome.

This is a unique book in a lot of ways.  Rob and Kristen wrote it together--their words are presented as responses, a conversation of sorts between them.  There are Rob's words, then there are Kristen's words--then there are the words they wrote together.  You get their different perspectives, their own zimzum as you read.  I loved this about the book.

Additionally, Rob and Kristen skillfully "sneak" the Gospel in between the lines.  There are doors that are cracked open for people who might be looking for something more in their life, in their marriage.  They teach about the Trinity, about the ways that marriage helps us understand God more fully--hints at the ways that marriage reminds Christians of how Christ loved the Church and "gave himself for it."

I highly recommend this book to anyone who is seeking to improve their marriage.  It can be read as part of a small group, of course, but I think it's best to read as a couple.  There is a discussion guide at the end of the book that I think is very helpful.  I truly believe this is the sort of book that could be read by Christians and non Christians alike to understand and better their marriage.