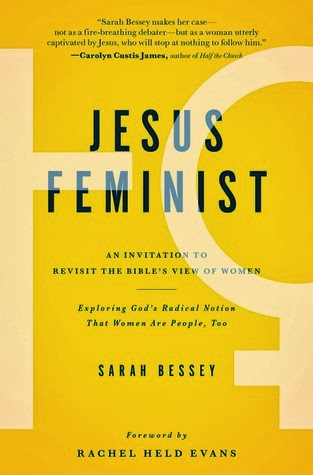 So when it came to certain doctrines--like the roles of women in the Church, for example--I went from one extreme to the other.  I started off life in a culture that was so patriarchal it made Abraham look wimpy and have spent the last sixteen years in one that affirms the role of women in every aspect of Church leadership.

I am telling you this because I know what it looks like when women are relegated to subservience in the Church as opposed to when they are not.  I prefer "not" by a long shot.  I am also telling you this because you need to know the location from which I would read a book like Jesus Feminist, and why I would think this might be the best book you could read this year.

Jesus Feminist: An Invitation to Revisit The Bible's View of Women (Exploring God's Radical Notion that Women Are People, Too) is written by Sarah Bessey who is a writer, an award winning blogger, and a stay-at-home mom with three little children.  She and her husband are part of a missional community in British Columbia, Canada.  She's a former fundamentalist and has attended non-denominational, charistmatic churches, and supported her husband who was once a youth pastor in a mega church in Texas.

Sarah Bessey is also a feminist---or to be more precise: A Jesus Feminist.  Bessey had grown up in a much more egalitarian church culture, but when she came to the States to attend a Christian college, she was exposed to the patriarchy of the Church, and taught all of the biblical reasons why women weren't allowed to lead.  It took a crisis of faith, and her own experiences of childbirth and motherhood to begin thinking that something was wrong with a theology that basically shoved half of the Church into the background.

She also discovered that the practice in most conservative, evangelical communities of "proof texting" to maintain a patriarchal theology wasn't working for her anymore.  She writes,

"It's dangerous to cherry-pick a few stand-alone verses particularly when they are used as a weapon to silence and intimidate, effectively benching half the church in the midst of holy harvest season when the harvest is plentiful and the workers are few." (58)

Most faith communities espouse either an egalitarian or complementarian point of view when it comes to the role of women in the church.  My own denomination would be considered as holding an egalitarian theology in that women are considered equal to men in every way when it comes to leadership in the Church.  Most conservative, evangelical faith communities hold what is a complementarian theology, which essentially subjugates women to lesser roles that "complement" the leadership of men.  Bessey goes about refuting the complementarian approach quite deftly.

Bessey writes beautifully and poetically. She also quite neatly presents a systematic treatment of what I would describe as "Neo-Evangelical Feminist Theology."  I remember reading feminist theology in seminary--Rosemary Radford Reuther, Elizabeth Schussler-Fiorenza and Anne Clifford to name a few.  Perhaps it was my age at the time, but I found their work to be angry, jarring and even combative at times.  Maybe they had to be, considering they were some of the first.

Bessey, on the other hand, is winsome yet firm.  Her work is compelling and convicting.  She could have come across as just another ex-fundamentalist with an axe to grind, but she didn't.  It's apparent that she values much of what she learned during those early years of her faith, but also realizes that God doesn't call us back to the past, God is constantly cajoling us into the future.

Unlike her more progressive sisters, Bessey doesn't resort to shocking, in-your-face language to make her point. For example, unlike Reuther, et al, Bessey doesn't refer to God as "she," although she does remark often on how conservative Christians are poorer for not using more maternal imagery to describe God's love.  Bessey sees God as "Abba," or "Daddy," which I am sure doesn't endear her to feminists in general.

Bessey also defies the feminist stereotype by choosing to be a stay-at-home mom, although she is quick to point out that her choice is what she considers her calling at this season in her life, and one that might not be for all women.

She does not shy away from prophetic exhortation, however.  She writes,


"I'm through wasting my time with debates a bout women-should-do-this and women-should-not-do that boundaries.  I'm out."

Then she goes on to say,


"What an adventure in missing the point.  These are the small, small arguments about a small, small god.  Our big and good God is at work in the world, and we have been invited to participate fully--however God has gifted and equipped and called each of us." (171)

For all of these reasons (and more besides) I think that Sarah Bessey is poised to make a huge impact on the conservative, evangelical wing of the Church in America.  This is one of those books that conservative, evangelical women will quietly pass around talking about in hushed tones after church.  It will be the kind of book that patriarchal pastors will condemn from their pulpits, and conservative Christian colleges will ban from their libraries.  I bet the folks at Lifeway book stores are already making sure that it doesn't find its way by accident on their shelves...

I highly recommend this book to anyone who has ever had questions about what the Bible says regarding women, and the implications of a more open and expansive view of Scripture on the subject of women in Church leadership.  I think you should read it, and then give it to someone who believes women should be silent in church.  Convince them, for the sake of your friendship, to read it---and then sit down and have an honest conversation about it.

There's even discussion questions in the back.