The Age of the Spirit: A Review of Phyllis Tickle's Latest Book 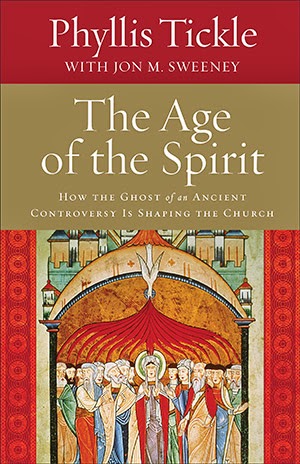 I remember the first time I heard Phyllis Tickle speak I was at a pastor's conference in San Diego, sitting in a roomful of pastors from all over the United States.  It was February and the weather in San Diego was---perfect, as it always is in San Diego.  I am sure that most of the pastors gathered there that day were more prepared to enjoy some nice weather and like me were quite unprepared for the knowledge Phyllis Tickle was about to throw down.

At the time I heard Tickle speak, she was just completing her work on what would become The Great Emergence: How Christianity is Changing and Why, which would be followed up by Emergence Christianity: What It Is, Where It Is Going and Why It Matters.

The Age of the Spirit is the completion of Tickle's trilogy on The Great Emergence, but is by no means the final word on the topic.  It is, however, the logical end of the preceding two books, and in keeping with Tickle's own theology of the Holy Spirit--what scholarly-types often refer to as pneumatology.

Tickle's faith background is in the Episcopal Church, where she is a lector and lay eucharistic minister.  Her scholarly and literary background includes over two dozen books on religion and a stint as the founding editor of the religion department at Publishers Weekly. Tickle also has her feet somewhat planted in the charismatic movement, and has long been an advocate for new understandings of the work of the Holy Spirit within the Church.

The Age of the Spirit is co-written with Jon M. Sweeney, a religious scholar and author who is known for his work on religious history.  The Age of the Spirit is, in fact, one of the most concise and clear histories of pneumatology in the Church I have ever read.  Tickle & Sweeney lead the reader through an extraordinary story of how the Church throughout the centuries has struggled to understand the Holy Spirit, and how the Holy Spirit leads and moves the Church.  The story that unfolds is replete with the many crises, debates, heresies, theological battles and even schisms that were the results of this struggle.

In the end, Tickle lifts up an intriguing idea that was originally posited by the Christian mystic Joachim of Fiore in the 1100's.  In contrast with many of his medieval contemporaries, Joachim was driven by the notion that God has a desire to be known in history and in the "workings of the world in each era."  He came to believe that there were essentially three eras of history--shaped by the Trinity itself.

The era of the Old Testament was the Age of the Father, a time when people related mainly to God, the Father.  Jesus initiated the Age of the Son, which Joachim believed was still underway in his time.  Joachim asserted that a new age would emerge--the Age of the Spirit--when humankind would relate primarily to the third member of the Trinity.  This new Age of the Spirit would be marked by a decreased importance in church structures, sacraments, creeds and even clergy.

Tickle doesn't go so far as to agree lock, stock and barrel with Joachim, but she obviously sees something at work in his theories.  The world is changing at an incredibly rapid pace.  The Church is also experiencing what some might perceive as "birth pains."  Could it be that the Spirit is leading the Church to new territory, a new way of understanding God?  Throughout Scripture we do see God calling humankind forward into the future---never backward into the past.

You could argue that the only time God reminds his people of the past is when God is preparing them for some great change and wants them to remember that he's always been there for them.  I think this is precisely what Tickle is doing with her latest work.  The way ahead may be unpredictable (following the Holy Spirit is not often a clear, linear journey), she asserts, but God has seen the Church through other "growth spurts" and will see it through this one.

I recommend The Age of the Spirit for pastors, church leaders, students and the like, who are interested in thinking about how the Church is changing and moving into the 21st century.  For a more complete understanding of Tickle's work on the subject, you may want to read the first two books in the trilogy.