Pastrix: A Review of Nadia Bolz-Weber's Memoir of a Cranky, Beautiful Faith 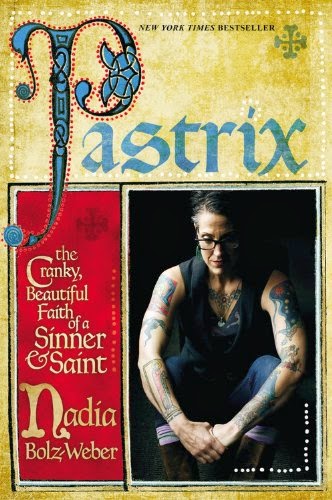 Bolz-Weber is a loud-mouthed, heavily tattooed, often-profane former stand-up comic, who also happens to be an ordained Lutheran minister.

She's also a recovering alcoholic and a former fundamentalist Christian, who discovered at an early age that the conservative faith of her childhood was something she didn't care to embrace.  Weber spent years in addiction of one sort or another, but always seemed to find her way back to God--despite her objections.

Her latest book Pastrix: The Cranky, Beautiful Faith of a Sinner & Saint tells the story of her pastoral calling in a rambling but engaging narrative filled with memorable characters, unforgettable moments, theological reflections on life, the universe and everything and a few curse words.

When I say a "few" curse words, I mean more than "some," but not enough to be "a lot."  There are enough, however, to get Pastrix banned from most Christian bookstores, and probably not garner any positive book reviews from Pat Robertson on CBN.

But like Bolz-Weber herself, don't let the rough exterior fool you, Pastrix is full of heart--and soul.  Surprisingly, despite her love of the Ramones, tattoos and occasional f-bombs, Bolz-Weber is fairly orthodox in her Christian faith, and completely traditional when it comes to the worship services she leads at her Lutheran church community in Denver: House for All Sinners and Saints.

As you read Pastrix, you will undoubtedly become convinced as I did that Bolz-Weber is uniquely called to minister to people widely considered as outsiders: drug addicts, prostitutes, drag queens and heavily tattooed, ex-fundamentalist, former comics.  In other word, the kinds of people that Jesus would probably hang out with if he were walking around doing ministry today instead of two thousand years ago.

If your theology runs a bit on the conservative side, you may feel some bumps in the road as you read Pastrix, I know I had my share of moments.  Most of those moments came when Bolz-Weber challenged my understanding of what it means to be a Christian who embraces more conservative views of Christian faith, theology and the Bible.  I honestly don't agree with Bolz-Weber's take on a number of issues--but I have to say that after reading Pastrix that list got a little shorter.

However, I can't tell you when I have read a book that at it's very core resonated with me more than this one.  Here's the thing... I found myself in the pages, plain and simple---warts and all. Truth be told I've got more than one tattoo, and my language has been known to be a tad salty at times (I'm a work in progress).  I've always liked the Ramones, and even made a pilgrimage to CBGB in New York to simply stand where they once played.  I love the Church even though it makes me crazy sometimes. So, yeah---I really enjoyed reading Pastrix.

I guess in the end it's good to know... that someone else understands what it's like to be called into the ministry even though it's the last thing on earth she ever dreamed she would do---and the last person on earth to be chosen to do it.

If you are easily offended by raw stories of life and faith... if you can't handle a bit of profanity... if you don't want to have your worldview or thoughts on Christianity shaken up a tad... then don't read this book.

But if you are ready for some raw and uncensored talk about God and what it means to follow Jesus in radical ways---then buy this book and read the whole thing.  And don't blame me if it messes you up.