Leading With A Limp - A Primer on Broken Leadership: Book Review 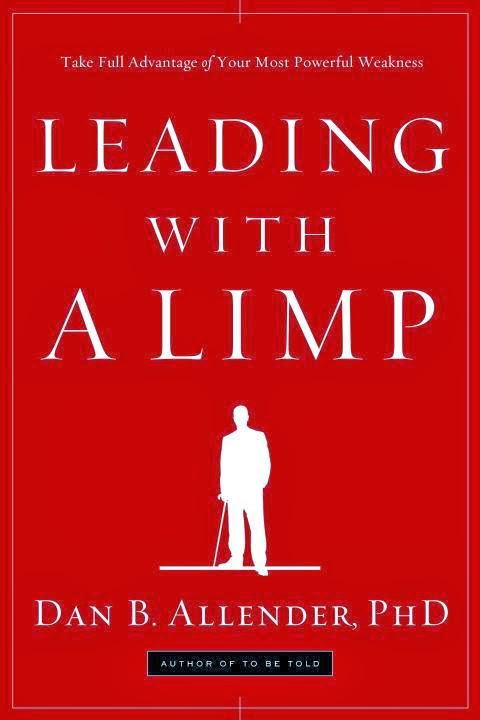 Dan Allender's book Leading With A Limp: Take Full Advantage of Your Most Powerful Weakness confounds me.  It took me a while to work my way through it--a few steps at a time while I was working on other books and projects.

As a result, I think I have two views of the book, which makes sense because honestly Leading With A Limp feels like reading two different books.

First, I have to say that there are enough quotes on leadership in Leading With A Limp to fill up a hundred of those inspirational posters you put around your office. Allender is that good.

Here are a few that lit my fuse so to speak:

A good leader will, in time, disappoint everyone.  Leadership requires a willingness not to be liked, in fact, a willingness to be hated.

Leadership will always require one person to stand closest to the edge and say, "Let's jump."

The difference between a manager and a leader is the internal urge to alter the status quo to create a different world.

See what I mean?  That last one was so good I used it at a critical point in my recent doctoral project to sort of bring the whole thing together--much like the rug in the Big Lebowski's pad brought the room together, am I right?

Allender's premise is that when a leader is willing and courageous enough to face her brokenness and name it publicly then she is ready to lead and effect transformation in an organization.  Allender is quick to point out that oversharing is not a good thing, and there are some foibles that need not be run up the flagpole.  But in general he is completely in favor of a more humble and open-handed approach to leadership.

I struggle with this a bit, to be honest.  I have been burned more than a few times when I have opened up and shared in a group at the various churches I've served.  Being a leader, especially the leader of a church, comes with a fairly large target on your back.  So Allender's call to openness frightens me a bit, but I am also challenged by it.

The last part of the book is the part that doesn't seem to fit all that neatly.  Allender launches into a discussion on the roles of Jesus as they relate to our own understanding of Christlike leadership.  Jesus, he asserts, functions as prophet, priest and king.  Similarly, there are leadership styles that correspond to these functions, according to Allender, and the most effective kind of leader finds a way to utilize all three.

In Allender's analogy, a king relies on authority, strength and charisma.  A priest is empathetic and grace-filled.  A prophet isn't satisfied with the way things are and wants to lead the organization to the next big thing.  All leaders, he posits, have a stronger leaning toward one of those functions, but should try to develop the other two as well.

I think that the analogy with the functions of Jesus is a little thin, to be honest.  But I do agree wholeheartedly with Allender's assessment of mature, effective leadership skills.  It's not that I don't care for biblical analogies, it's just that I think he could have made the point without them.  At any rate, it doesn't change how I feel about the book, which is extremely positive.  I recommend this book to church leaders, pastors, seminarians and also for people who are managers or own their business outside of the church.