Church Worth Getting Up For: A Book Review 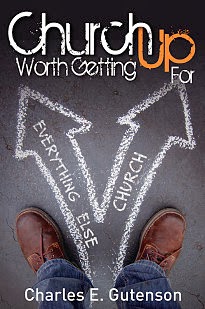 I read a lot of books on church transformation, leadership and growth.  And when I say "a lot" I mean a lot.  What I've discovered is that a great deal of the work that is being done on church transformation, leadership and growth is coming out of the non-denominational, or "evangelical" wing of the Church.  There's a decided lack of voices (at least in my experience) from experts within the "mainline Protestant" tradition.

Which is why I was excited to read Charles E. Gutenson's book Church Worth Getting Up For, which was published last year.  Gutenson is a former pastor, current consultant and professor at Asbury Theological Seminary.  His frame of reference is the United Methodist Tradition (UMC).

For Church Worth Getting Up For Gutenson interviewed a virtual "who's who" of pastors, authors and church leaders who have been in some way, shape or form connected to what was once known as the "missional church" movement. He references emerging pastors like Nadia Bolz-Weber, Greg Boyd, Ross Picardo and Chris Seay, and two of the pioneers of the missional church movement Alan and Deb Hirsch.  From his own tradition, Gutenson spent time interviewing Mike Slaughter, pastor of Ginghamsburg United Methodist Church and one of the most well-known pastors in the UMC.

A significant portion of Gutenson's work in Church Worth Getting Up For is gleaned from both the interviews he conducted and also from work that was done by Dave Kinnaman and Gabe Lyons, who wrote the book unChristian.
Dave Kinnaman also wrote a book entitled You Lost Me, which Gutenson references frequently.

Despite the fact that some of the material Gutenson presents was from works I had previously read, I rather enjoyed the way he presented it, and then processed it from his mainline lens.  Gutenson affirms that our culture is changing and that the emerging generations are avoiding church like the plague.  He offers some basic criticisms as to why he believes this is happening, which move above some of the specific reasons that authors like Kinnaman and Lyons outlined.

Gutenson offers a criticism of traditions within the church that rely too heavily on evangelistic tools and methods without paying attention to the kingdom work they have been called to do.  On the other hand, he offers similar criticisms to left-leaning mainline traditions that rely too heavily on deeds and not words. Essentially, he calls for a balance between the two extremes: evangelism and missional focus.  Gutenson cites Slaughter's Ginghamsburg church as a fine example of the kind of church that emphasizes right belief, evangelism and outreach, but also is focused on embodying the kingdom of God in the world.

Church Worth Getting Up For also provides a vision for churches to engage the world in different ways--to move beyond traditionalism and become transformative through radical hospitality, blurring the lines between sacred and secular and raising the bar when it comes to discipleship programs.  The latter is one that Gutenson also uses Ginghamsburg church to highlight through which he asserts that when churches challenge their members to deeper discipleship it will pay huge dividends for the kingdom of God, and could very well be one of many factors that draws emerging generations back to the church.

I recommend Church Worth Getting Up For for pastors, church leaders and church governing bodies who are seeking discernment in the next steps of transformation for their church.  If this is the first book of its kind that you read, it will definitely give you plenty of stepping off points for further reading on the topic.