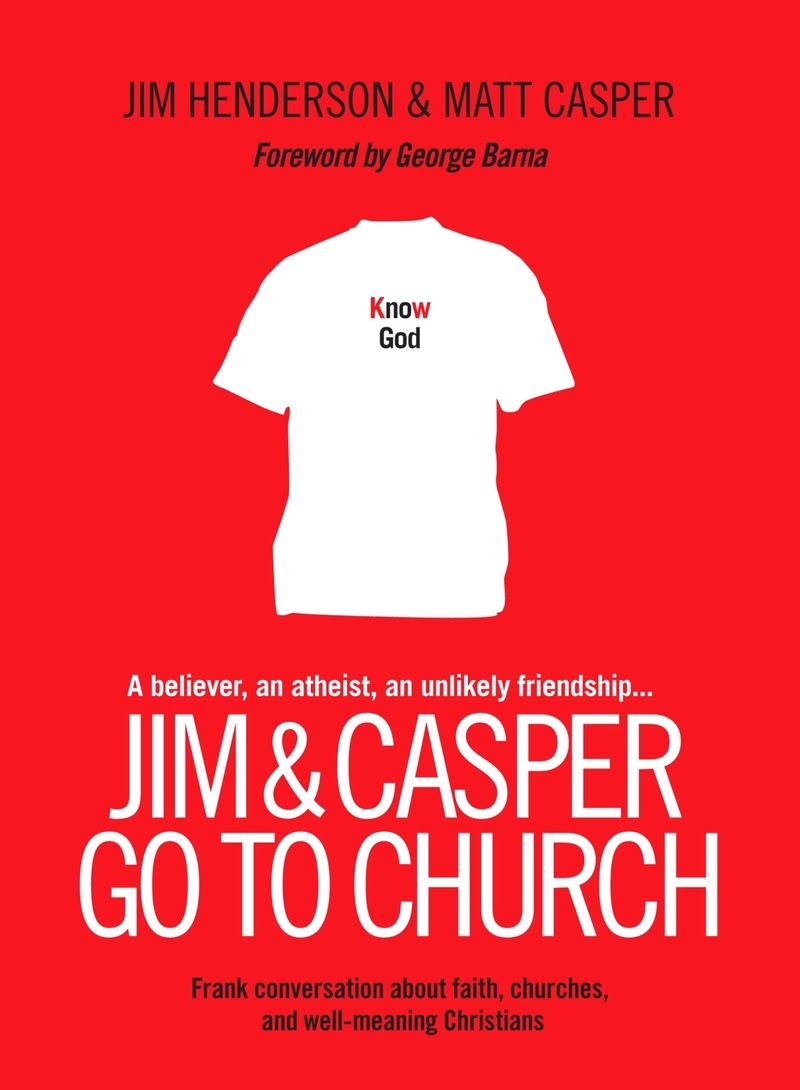 In the early 2000's Jim Henderson, a former pastor and newly minted church consultant,"bought" an atheist off of E-Bay for $504, and put him to work.  The atheist, a young man named Hemant Mehta, had been looking for a fun way to show Christians that he could attend church with an open mind, and was willing to allow Christians to give him their best shot at converting him.  Henderson won the bid, and sent Mehta out to start visiting churches with the assignment of reporting what he experienced. The result spawned a website, discussion groups, stories by the Wall Street Journal and much more.

In 2006, Henderson met Matt Casper, a marketing copywriter and freelance writer and singer/songwriter, who lived in San Diego.  Casper also happened to be an atheist.  The two became friends and decided to write a book together as they visited churches all across America--documenting their dialogue and their experiences.  They agreed to be as open and honest with one another, and with their readers about what they experienced in the various churches they visited.

The resulting book was Jim & Casper Go To Church: Frank Conversation About Faith, Churches, and Well-Meaning Christians.   Henderson and Casper visited Rick Warren's Saddleback Church in Southern CA and the Dream Center and Mosaic in Los Angeles.  They went to Chicago to visit Willow Creek Community Church, a Presbyterian Church in an upscale neighborhood and Lawndale Church, a church/mission in urban Chicago.  Their journey took them to the Northwest to visit the Bridge, Imago Dei and Mark Driscoll's Mars Hill Community Church.  They rounded out their pilgrimage by heading to Texas for a visit to Joel Osteen's Lakewood Church, and T.D. Jakes' The Potter's House.

All in all, they visited Pentecostal, Baptist, Mainline, and Non-Denominational churches.  There were plenty of "mega-churches" but just as many medium to large sized churches as well.  One church met in a house, several of them met in converted warehouses and one (Mosaic) met in a bar.

The fascinating thing about this book is the way that Casper responded to the various church experiences.  There were moments when he was revolted (mostly in moments that had to do with the offering, and messages about money) and moments when he felt very connected (in the house church, and during the worship music of the Bridge).  Casper drew clear lines between churches who seemed to be all about their own self-preservation and growth and churches who seemed more interested in making the world a better place.  He was impressed when pastors and church leaders would speak from their heart, and could sniff out staged behavior, "pastorspeak" and "Christianese" very quickly.

In a way, Jim & Casper Go to Church was quite difficult to read--at least from a "professional" church goers point of view.  Casper didn't hold back when he thought that something was contrived, irrelevant or condescending in the churches he experienced.  But this honesty is also what makes this book so helpful.  After reading it, I found myself taking notes on things I needed to keep from saying when I preached, and ways to demonstrate to visitors just what our church is all about (not self-preservation), and how we are hoping to make the world a better place.

This isn't one of those "12 Keys to Effective Church" or "7 Ways to Change Your Church" books--it's something more.  Jim & Casper Go To Church provides the reader some rare insight into how nonChristians view what we do on Sunday mornings (or evenings... or Saturday evenings...).  I highly recommend this for pastors and church leaders who are seeking new ways to relate to people outside the walls of their church.