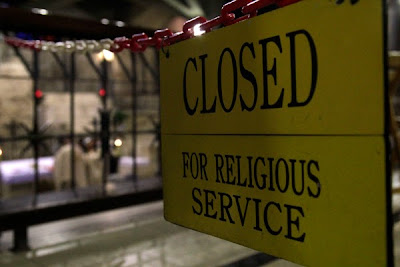 In a recent blog post, Dr. Albert Mohler, President of Southern Baptist Theological Seminary, used the Presbyterian Church (USA) as an example of how "liberal Protestantism" continues it's long slow amble toward suicide not because it's hemorrhaging members at an alarming rate, but because it has lost it's way.

After citing a number of surveys that were recently completed by The Presbyterian Panel (surveys that indicate a growing lack of orthodoxy among both the clergy and laity of the PCUSA) Mohler makes a bold assertion. He writes, that the PCUSA is "a church that has lost its confidence in the Gospel in terms of the clear biblical claim that salvation comes only through faith in the Lord Jesus Christ."

Mohler cites the prophetic work of Thomas C. Reeves from his book, The Empty Church: The Suicide of Liberal Protestantism within which Reeves makes this prescient statement:


Liberal Protestantism — institutionalized in the old Protestant “mainline” denominations — has been following a path of theological accommodation for a century now, and there appears to be little hope for a major theological correction. Renewal groups have been working within these churches for decades, attempting to call the denominations back to biblical Christianity. To date, they have won only isolated battles in most of these churches.

Having been tangentially connected to some of those very renewal groups, I would have to agree with Reeve's statement about the lack of renewal.  I would also add that the struggles between "liberals" and "conservatives" within mainline denominations have been centered on issues that have garnered a lot of press, but have little to do with what truly separates the two "sides" from one another.

My concerns about the path that liberal Protestantism means to take the Church have little to do with the debate over individual issues like sexuality, marriage equality, sacraments, biblical interpretation and the like.  What concerns me is that liberal Protestantism seems to be intent on blurring the lines between culture and the Church, diminishing the distinctions between what some might call "the world" and Christianity.

Mohler agrees with this, and cites this very thing as one of the many reasons people are growing less and less interested in the Church.  He writes:


As the boundaries between liberal Protestantism and the secular culture vanish, there is little reason for anyone to join one of these churches.

I have made the aforementioned point before, but not nearly as well. Seriously, we need look no further than a secularized Europe to see the legacy of generational malaise toward religious experience and church attendance, and a Church that doesn't look all that different than it's surrounding culture.  No on goes to church there.  What's the point?

Ultra-conservative Protestantism has long been criticized for turning people off with it's dogged pursuit of "truth," and it's emphasis of rules over relationship when it comes to following Jesus.  Many of us within the Church have one story or another of how other church-y people made us feel less than and not good enough because we asked too many questions or didn't always follow the rules.

I think the way forward will take courageous leaders, and a better story.
And I think that the true renewal of the Church will happen on a grass roots, or local level away from the bureaucracy and brokenness of the old denominational systems.

First---Courageous Leaders:  It's too easy to fall into categories, to embrace dichotomies, and to try to define yourself by what you are not.  What if leaders within the Church had the courage to simply follow Jesus and leave the political posturing and choosing of sides to those who can't seem to do without such things?

To that end, far too many activist types on both the right and the left within the Church seem to know what Jesus would do or say about one hot button issue or another.  Funny how their version of Jesus always seems to look just like them, isn't it?

Second---A Better Story: I have come to believe that both Liberal Protestantism and Conservative Protestantism suffer from a healthy dose of self-loathing.  Liberal Protestants barely want to be referred to as "Christian," and Conservatives can't stand it if someone asks them to think.  If the sum total of your church experience is to merely reaffirm and work toward the realization of the Democratic Party platform---you need a better story.  If you can't move beyond the black and white legalism that engenders intolerance and an exclusive narrow "Gospel"---you need a better story.

The Good News of Jesus is bigger than left wing activism.  It's also bigger than a theology based entirely on where you go when you die.  It's bigger than the culture the Church seems to be resembling more and more every day.  It's bigger than my assumptions about who Jesus was, is and who he might save. And it's definitely bigger than what I believe about sexuality, money, politics, justice, life the universe and everything.

Every single moment we read the Scriptures... Gather together in worship... Offer a cup of cold water in the name of Jesus...  We step toward the threshold of a new reality that God is inviting each of us to embrace---beyond dichotomies, beyond divisions and definitely beyond our feeble definitions.

Isn't it time we took the step?