The Ladder: A Metaphor for The Church 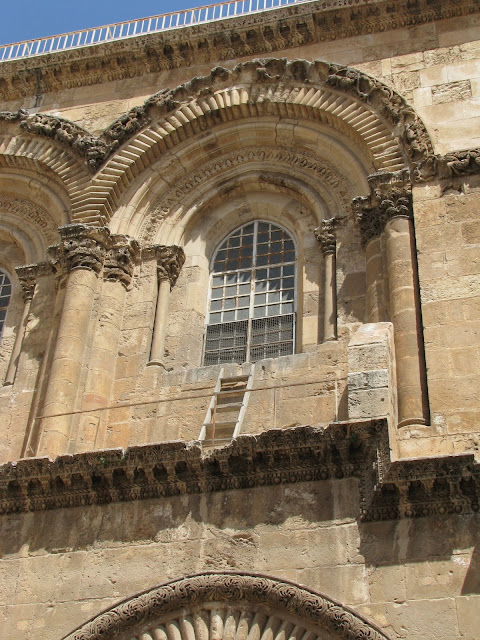 In the years 326-328 Empress Helena, the mother of Constantine, the first Christian Roman Emperor, was given unlimited resources by her son to locate all of the Holy Relics and sites related to Jesus life, ministry, death, burial and resurrection.

According to Bishop Macarius of Jerusalem, the site of the true cross of Jesus was discovered when the remains of the cross healed a woman who was near death.  It seems that Helena arranged for the woman to be brought to the site in order to "test" whether it was really the cross of Jesus.  After this miracle, Constantine ordered a church to be built on the spot where it was discovered.

The original church was destroyed by the Persians in the 5th century, rebuilt in the Byzantine era and strengthened during the Crusader period.

Over the centuries various groups of Christians have shared control of the Church of the Holy Sepulcher: Catholics, Greek Orthodox, Armenians, Copts and Ethiopians.  None of these groups have ever really gotten along.  In fact, the history of the Church is marred with actual battles between them inside the walls of the holy site.

At some point there was so much acrimony over who controlled each section of the Church, and who was allowed to change things both within and without the Church itself that an agreement was reached between the groups that no items could be removed or changed... ever.  Refurbishments to the Church could be done, of course, but only after approval of the controlling groups, and only when absolutely necessary.  The keys to the Church were given to a local Muslim family who was neutral to the whole thing.  That family still symbolically holds the keys and a representative arrives each morning to unlock the doors and each evening to lock them.

The photo I took... scroll back up and look at it closely.  You will see a ladder on the ledge.  That ladder was there when the agreement was struck not to remove anything.  Our guide told us that it was probably used by monks who were using the ledge as a garden and the ladder was their way to climb up and down.

Because the ladder was out there when the agreement was struck---it can't be removed.  It's been replaced many times---each time it grows rotten and falls apart.  But the ladder remains.

When I saw this and heard the story about why it was there, I completely saw it as a metaphor for the Institutional Church---an entity that clings to pointless traditions, and then wonders why people outside of it think that Church is anachronistic and irrelevant.

The sad thing is that the Church has so much to offer the world because those of us who are within it are truly called to be the sign and symbol of the kingdom of God.  But instead of embracing the mission that Jesus created the Church to fulfill, we keep replacing ladders because it's what we've always done, and in the doing we repeatedly demonstrate that we've lost the plot.


What are the ladders in your church that need to be taken down?  What traditions does your church cling to that has nothing to do with the Gospel and everything with maintaining the status quo?


There's nothing wrong with a ladder---as long as it leads to something and is actually used to further the Gospel.  When it becomes a sign and symbol for our stuck-ness----it needs to go.