Moses My Servant Is Dead: Leadership That Doesn't Look Back 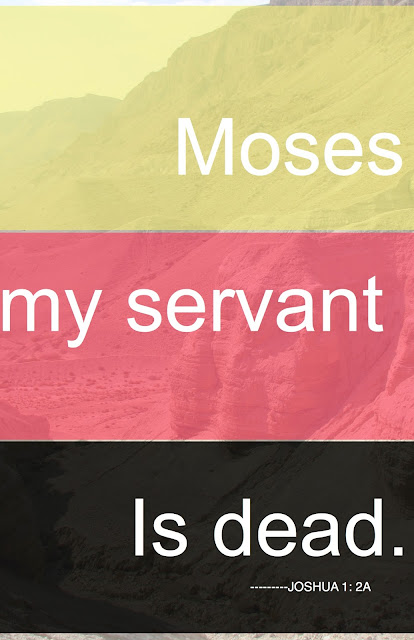 In the first chapter of the book of Joshua in the Hebrew Scriptures, God speaks to Joshua, who has been waiting for his mentor and leader Moses to return from talking with God about life, the universe and everything.

"Moses, my servant is dead."

God doesn't try to break it to Joshua gently.  He doesn't ask him to sit down and pour him a cup of tea before breaking the news to him.  He just tells him bluntly, "Moses is dead... now you need to get going."  There is no going back to search for Moses to make sure that he is truly dead.

I made the graphic you see at the outset of this blog into a poster that hangs on the wall in front of my desk.  It reminds me of two things:

1)  The past is the past.  You can't go back there.  You can't live there.  God doesn't want you there.  When it's time to move forward into the future that God has in store for you---you better get moving.  There's no time to go back even if it's for what might seem like a worthy cause.  Moses was dead.  There was nothing to be done about it.  Moses had only taken the Hebrew people out of Egypt, led them through the wilderness, and unimaginable hardship.  Moses had only listened to the people of Israel gripe and complain so badly that he'd asked for death.  Then when it came time to finally realize the future that God had been using Moses to lead the people to all along---he died.  Then it was Joshua's turn, and despite all of the wonderful things that Moses did... there was no real funeral for him.  No monument.  No carrying around his bones in an ark.  He was buried by God and that was it.  Time to go and whack some Amalekites.

2)  You are only a role player in the bigger story that God is writing.  When it's your time to meet God and get buried in obscurity on a mountain... it's your time.  That poster reminds me that my time will one day come to an end and there will be some other dude who will be given the chance to lead the people where I may have not been able to lead them.  What I consider my ministry is God's ministry and not mine.  Whatever I do is for his glory and for the sake of the kingdom of God.  A good rule of thumb to remember in ministry leadership is that there's only one Messiah and you are not him.  One day you'll be the past that other people wish would fade into the distance.

Find ways to think and work outside of the box.

Color outside of the lines.

Life as if life is short. Because it is

Eat dessert first, if you know what I mean.

Don't be afraid of what people might say to you.

What's the worst that could happen?  You might get fired, that's true.  But seriously, if you get fired for trying to do something innovative to reach people for Christ---you will find another church to serve without a problem.

For every twenty churches that are dying on the vine, there are at least one or two that are searching for ways to live.

You could lead them.

Maybe you'll be their Joshua.