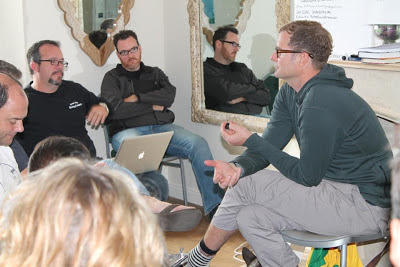 Two weeks ago, I attended the first CraftLab event, hosted and led by Rob Bell.

That's me to the left of Rob Bell in the picture you see here.  I'm the guy with the computer.  My friend Mike (sitting to my right) and I look vaguely like one another except he has more hair a cooler beard, and he's way smarter than me.

But this is proof that I was hanging with Rob Bell.  If you needed it.

CraftLab was billed as a two-day, twenty-four hour workshop primarily for preachers and church communicators/teachers, although anyone working on a creative project like a book or film was encouraged to attend as well.

The pre-event instructions were vague.  Participants were asked to come with an idea to share, and to be familiar with Rob's teachings on creative communication as expressed in the Poets, Prophets & Preachers videos from a conference he hosted several years ago in Grand Rapids, MI.

Other than that, everything was fairly wide open.

There were 50 participants in the CraftLab---a number that Rob has determined, after doing a few events like this, is the ideal number for group dynamics, creativity and energy.

The setting was not terrible at all:  The Pacific Edge Hotel in Laguna Beach, California.  My room was right on the ocean, and my wife and I left the window open to hear the waves at night.

Here are some things I learned about preaching from the right Rev. Rob Bell:

"Some sermons... can really be mucked up if you cram a bunch of Bible verses into them."
[referring to preachers who use proof texting---and lead you on a merry chase through the Bible trying to prove their point]

"Structure always submits to Spirit."
[A comment made regarding the formation of the Church, but one that could easily apply to sermonizing]

"Worship hands people words to put on their own lips."
[this doesn't even really need an explanation.]

"We only generally move when our previous categories and ways of labeling ourselves no longer work."
[commenting on how to help people connect with sermons in such a way that it makes them want to move toward transformation]

"Sometimes you tell the story---the information in your illustration--too slowly...when you get to the point, the Scripture, the punch, you need to slow down."
[Rob said that it's okay to breeze through the illustration, and to resist the temptation to draw it out too long.]

"Why was a sermon boring?....There was no overarching arc, and no smaller arcs inside the sermon."
[The story of your sermon needs an arc, but there needs to be places within the sermon that contain moments of "rest" or a place to build upon]

"If you have been trapped in your office---you're done.  You need to have people to bounce things off of."

"Read your commentaries for no more than an hour."

"If you're spinning your wheels in front of the computer, walk away from it."

"Do a better job on your sermon notes (that you give the congregation), make them more interactive and suspenseful."
[Rob hates fill in the blank---except when it's bizarre fill-in-the-blank or where the note taker has lots of space to write down thoughts]

"What can you create each week that people would stick up on the wall of their cubicle?"
[What sort of memorable take away did you give the congregation that they will hold on to all week and beyond?]