The Light & The Promise: Advent Week One 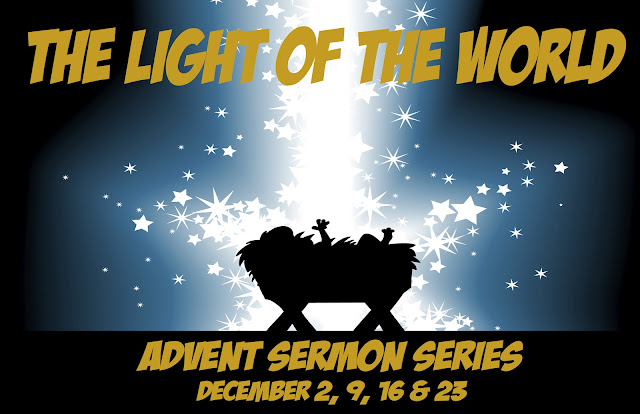 In 1946 Frank Capra filmed perhaps the most beloved Christmas movie of all time, "It's A Wonderful Life," starring the legendary Jimmy Stewart in perhaps his most well known role as George Bailey a man who gets the chance to discover what the future would be like if his life had turned out the way he'd always hoped it would.

Check out the trailer to jog your memory...


This movie, with it's happy ending and schmaltzy story line of redemption and goodness is endearing even to this day, despite being 66 years old.  But it's clear to anyone who watches it that the reason it belongs in another time has less to do with it's black and white cinematography, dated music and long-dead actors.  The reason it belongs in another time is because it's view of the world as an essentially good place, full of good people who all pull together when their neighbor is in crisis to give him and everyone else a Merry Christmas is quickly becoming an antiquated notion in our current culture.

What made this movie such an endearing story in it's day?  Was it timing?  The long wars in Europe and the Pacific were over.  America was counting the cost of the countless lives lost and the young men and women who were coming home to try to make new lives, pick up where they left off, start families, find their purpose.

The simple message of hope--that in the end everything would work out all right if we all just pulled together--contained in It's A Wonderful Life spoke to the audiences of post-World War II America.

And I think to some extent it still speaks to audiences today, but in a different way.  You see, the audiences of 1946 would have seen this movie as a vision of a hopeful future.  The audiences of 2012 see it as a nostalgic fantasy---a relic of a time that no longer exists, save only in our memories or on our television screens.

Why is it so easier for us to look back than it is to look forward?  Is our future any less uncertain than our ancestors?  Some might say that it is.  Perhaps they would be right.  Our economy seems ready to fall off of a cliff, terrorists are lurking around every bush, people can't be civil about anything anymore and even the actor who plays the kid on "Two And A Half Men" is admitting his show his "filth."

This is why I think we need a little Advent prophecy.   Consider these words:


14 “‘The days are coming,’ declares the Lord, ‘when I will fulfill the good promise I made to the people of Israel and Judah 15 “‘In those days and at that time I will make a righteous Branch sprout from David’s line; he will do what is just and right in the land. 16 In those days Judah will be saved and Jerusalem will live in safety. This is the name by which it[a] will be called, 'The Lord Our Righteous Savior.’

This passage of Scripture has no shepherds.  There is no star in the east.  Ther are no angels singing on the hillside.   There's no nostalgia here, is there?

And this promise, like this passage is lifted up in the middle of despair---the despair of exiles, who have lost everything.  It's believed that this passage was written during the time of the Babylonian Exile for the Hebrew people.  Jerusalem has been destroyed.  The Temple of Solomon is gone.  The memories of David's great kingdom are in the past.  The reality is a different life in a foreign land where the exiles are tempted to just settle in to the way things are, even as they pine and long for a past that they can't recover.

It would be so easy in the middle of this exile, to just give up and give in, which is precisely what many of the Hebrew exiles did.

Then you get this prophecy.

"The Days Are Surely Coming..."

Something is about to happen.  There is a change in the air.  There are days ahead that are going to arrive, and when they do everything will be different.  The future that God has already prepared for the people of Israel---an alternative future than the one they had resigned themselves to--is one full of hope, justice and redemption.

There's something ominous and awesome about this.  You see, humans meet despair when they cannot imagine God's promised alternative future.  And yet, it's difficult for many of us to hear that the future may be different than what we expected.  There might be change and transformation ahead, the object of that change and transformation might be us.

I believe there are three ways that we can embrace the hope of this prophetic word, and let our fears and anxieties about what is to come fall away.

First, I think we need to leave the Past.  If you live in the past you never leave it, you never learn from it.  The past isn't a place of residence, but it did help shape you.  The important thing to remember is that your past is full of signposts.  The past should be a sign post of trust that helps us hopefully imagine what God is going do do in the future.

Second, I think that we need to re-imagine the Present.  The question that is begged from the end of the passage from Jeremiah is this:  "Is the Lord your righteousness?" Can you honestly say that about your present?  The prophecy of Jeremiah reflects a present that looks hopefully toward a day when that righteousness will be realized.  Righteousness is not an attitude or an absolute standard.  It is conduct in accord with God's purposes--it is doing the good thing, and the God thing.  Your present circumstances should reflect a life lived in the here and now, but one that is already experiencing the hopeful vision of the future.

Finally, I think that we need to be filled with a Hope for a Hope-filled future.  You won't be able to fill the future with hope by sheer force of your own will, though.  What you do is you place yourself in a position by the way you live your life, striving to connect with Jesus, offering yourself selflessly to the world that you are ready when God's new reality of that hope-filled future breaks through.

So what can we do to practically make these ideas about the past, present and future a reality in our lives?

Well, I think it starts with timing.  We need to think about our calendar a bit differently and begin the whole process by re-ordering our year.  We need a new New Year's Day, to begin with.  New Year's Day for those of us who stumble after Jesus should be Christmas Day---the day after the birth of the Messiah.  This is the day we celebrate that how God's crazybeautiful plan of salvation was birthed into a waiting world.

When the prophet proclaims "the days are surely coming..."  the days he was foretelling have already arrived, are arriving and will arrive.

For those of us in the midst of the now and the not-yet, it's hard for us to wait.  Advent time is different than other times---it is out of joint, it's bumpy, it has moments of deep silence, darkness and longing.

But if we are faithful, if we are courageous, we will find ourselves able to look back and see where God has been, where God is now and will know with a certain hope that where God will be is a place of grace, peace... and light.