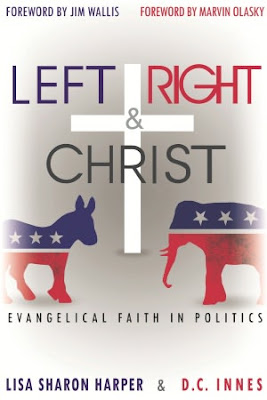 During this hotly contested national election, it has occurred to me more than once that our nation has become what some might characterize as "hopelessly divided."  Cable news channels routinely pit guests with opposing views against one another while a supposedly neutral talking head "moderates" their discussion.

It's all carefully scripted to make sure that the viewers get to see what they want to see.  Television plays to its intended audience.  If you are liberal and you want to see conservatives get trounced on air 24/7, tune in to MSNBC.  If you are conservative and you like to see liberals get their comeuppance, watch Fox News.  And so it goes.

So how do Christians fit into all of this division?  Aren't we supposed to be "one in Christ?"  The fact of the matter is that we aren't.  Christians are just as hopelessly divided as anyone else, and both liberal and conservative Christians claim to have the authoritative interpretation of Scripture to back up their political and social world views.

Which is why I found Left, Right & Christ: Evangelical Faith in Politics an interesting book for a very complicated moment.  Left, Right & Christ is written by D.C. Innes and Lisa Sharon Harper.  Innes (representing the right) is an ordained minister in the Orthodox Presbyterian Church and an associate professor of Politics at The King's College in New York City.  Harper (representing the left) is Director of Mobilizing at Sojourners, a Christian-based, left-leaning organization that lobbys for and seeks to enact social justice.

The two authors take on issues like the role of government, abortion, poverty and immigration, among others--both citing Scripture and falling back on their understanding of evangelical Christian faith as a guide for their assertions.  The book is presented in a sort of "he said/she said" format, and it is clear that both authors read one another's thoughts even as they were formulating their own.

I highly recommend Left, Right and Christ to both Christians and nonChristians alike.  It's easy to pigeon hole evangelical Christians into stereotypes, especially when we divide ourselves into "liberal" and "conservative" camps.  What this book does is highlight the differences, but also the similarities that exist between brothers and sisters in Christ who just happen to disagree---not on the essentials of their faith, but on the way they live the implications of their faith.