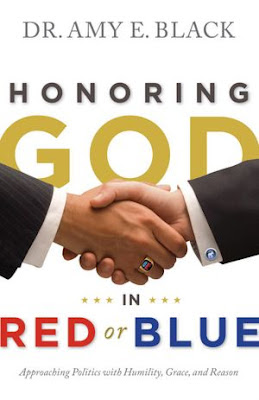 As we are quickly approaching a hotly disputed national election, I thought I would engage in some reading on faith and politics.  I'm also preaching a two-part sermon series called "God's Politics" the Sundays before and the after the election, and I wanted to start preparing.

The book I am reviewing and recommending today is Honoring God in Red or Blue: Approaching Politics with Humility, Grace & Reason by Dr. Amy E. Black, Associate Professor of Political Science at Wheaton College.

In a recent interview, Black explained why she wrote Honoring God in Red or Blue:

"My book came out of an adult education class I taught at my church and from my work teaching at a Christian college. I recognized that many thoughtful Christians didn't know as much about the political process as they thought they needed to be active participants and a lot of folks wanted a basic primer about how it all worked.

I'm also concerned about the tone of contemporary politics. There's so much attack, so much exaggeration and distortions, sometimes even done in the name of Christ. I want to call Christians to a different approach. I want to encourage them to be humble instead of arrogant, and to show that we can disagree and still be gracious. In other words, I want us to be humble and thoughtful witnesses for Christ."

Read more of the interview here

The book is a primer of sorts on American government, which I found helpful since my high school Government (we called it "Civics" in the dark ages) class was over 25 years ago.  Black writes in layman's terms, and does so in a moderate tone,  expertly highlighting the problems that both the Republicans and Democrats seem to be having when it comes to basic governance due to an increasing lack of civility in public discourse.

Black also succinctly outlines some basic points of view regarding politics and faith from four of the main streams of theology: Catholic, Lutheran, AnaBaptist & Reformed.  Most Christians (whether they know it or not) find themselves the heirs of at least one of these streams of theology.  I found this very helpful, and it gave me some insight into what some of my Christian brothers and sisters of different political points of view might be thinking.

This is something that Black reiterates, over and again.  Well-meaning Christians can disagree on politics, and are seldom truly monolithic in their responses to political issues.  She writes, "The diversity of the body of Christ makes room for Christians to disagree on many political matters." (24)  She also admonishes Christians against speaking harshly against another believer who might have different political points of view:

Finally, Black offers some ways that Christians can honor God in their political interactions.  "It is possible," she writes, "to model an alternative path [to hateful, angry speech and interactions] avoiding polarizing and uncharitable characterizations of those who hold different views."  (143)  Black asserts that one way to play by different rules is for Christians to show respect to their political opponents and simply advocate different political means to achieve their goals.

She also offers the following fact check websites for Christians to use in order to weed out all of the rhetoric that we hear from politicians and from the biased news media on the right and the left:

Factcheck.org - check out the "AskFactCheck" section.

Politifact.com - run by the St. Petersburg Times - measures on a "Truth-O-Meter"

Snopes.com - resource for checking the truth of political rumors.

I highly recommend Honoring God in Red or Blue as a must-read for anyone who is tired of the way politics has become such a muckracking enterprise in America.