What Happened To That Song That I Used To Know? 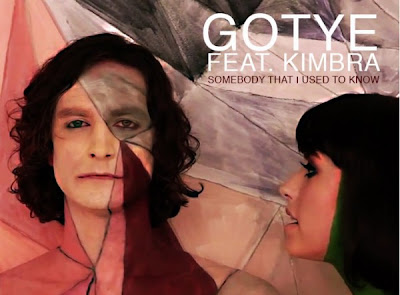 Sometimes there's a song that is a song for the moment.

A song that has that right mix of quirky music and infectious lyrics that invades your skull and stays there like that old roommate you had when you were in college, the one that never paid rent and occupied your couch watching SportsCenter and Jerry Springer for a whole semester, while you were trying to write that paper on Herman Melville's Billy Budd for that weird professor who thought that every truly American story about "men and fish" had gay undertones.

Sometimes there's a song.  And I'm talking about Gotye's "Somebody That I Used To Know" here, that gets played on the radio roughly three hundred times an hour, and somehow you can't shut it off when it's playing no matter how much you think you want to.  Instead, you find yourself singing along at the top of your lungs in the car, making up the lyrics that you can't understand as if you know exactly what they are.

Sometimes there's a song with a strange video on Youtube that gets over 300 MILLION views, and is just so easy to parody...

For those of you who have no idea what I am talking about, have been living under a rock for the past year, have never really browsed the InterWebs, and are totally disconnected from pop culture, I give you the aforementioned strange video from Gotye's ubiquitous song, "Somebody That I Used To Know."
I should add as commentary: the overall theme of this video is sort of a twist on the story of Adam & Eve (I think) so there's a hint of nakedness in it.  It's strictly PG, though, without any real sexual overtones.  Enjoy...

So odd that it spawned hundreds of parodies.

The one below is my favorite, and you sort of have to be a Star Wars fan to understand it.


Here's the thing, if imitation is the highest form of flattery, as some wise person said some where, then Gotye's "Somebody That I Used To Know" is easily one of the most flattered songs around.

In fact, the band actually compiled a video of all kinds of people who shot video of themselves performing the song and then posted their efforts on Youtube.  The result is magnificent:

So why does this matter at all to a pastor?

Well, it sort of reminds me of the way that many Christians try so hard to imitate Jesus.  None of the attempts really measure up to the original, do they?  And some of them are just horrible.  But through the eyes (and ears) of the artist who sang the song, there is beauty in these attempts.

And when the artist takes all of the best (and sometimes worst) moments from these attempts, and puts them altogether with wisdom and with the integrity of the original in mind...

Maybe this could be a vision for the Church.  A bunch of would-be artists doing their best to sing the song sung by the Master---some failing, some re-interpreting it, some coming close to the way it should sound.

And then the Master taking these songs and weaving a symphony out of them to the glory of God.