The Demise of the Episcopal Church: A Cautionary Tale 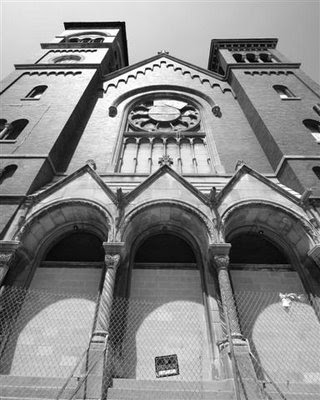 Imagine that you are on an expedition to scale Mt. Unfathomable.  You reach a fork in the path near some treacherous cliffs.  It's foggy.  And I mean the kind of fog that you can't see your hand in front of your face.


So to test things out, so to speak, you send one of the sherpas to the fork on the left.


For a time there is silence, save for the sound of the sherpa slowly shuffling along.  Then there is a scream, a scramble and then the sound of a shrieking sherpa, falling to his doom.


So you send another sherpa.  And this one also falls to his shrieking doom.


You send yet another sherpa.  Shrieks.  Doom.


Finally, you are out of sherpas.


You turn to the other people in your expedition party and you say to them,

Let me share a story with you about a church that was...

There was a time in American history that if you wanted to be elected President of the United States, you had better be an Episcopalian.  The Episcopal Church was the denomination for the rich, the powerful, the connected and the influential.

Like most mainline Protestant denominations, however, the Episcopal Church has fallen on hard times, and have been hemorrhaging members, mostly from attrition, but lately because of controversy.   At their recent denominational convention, Episcopal delegates continued their trend of making controversial decisions regarding ordination, the definition of marriage, and much more.


Several years ago, when the Episcopal Church elected the first openly gay bishop, Eugene Robinson, many local congregations and quite a few diocese declared they were heading to the Anglican Church, and wanted to take their property with them.  Unfortunately for them, the Episcopal Church sort of owned the property, and didn't want them to have out it---mostly out of spite.  Read this account:

Convention attendees were told that they had spent $18 million this year suing their own local congregations — those which have protested the denomination’s policies by trying to secede. The New York hierarchy has consistently won in court – asserting that the local members signed over their buildings decades ago. As a result, some of the largest Episcopal congregations in the United States have been forced to vacate their buildings and meet elsewhere.

If there had actually been a purpose to all of that litigation and ham-handedness, it might make sense, but there's this:

So now, convention delegates were told, the denomination is the proud owner of scores of empty buildings nationwide – and liable for their upkeep in a depressed real estate market where empty church buildings are less than prime property. It’s the classic “dog in a manger.” The denomination has managed to keep the buildings – for which it has little use. However, they made their point – refusing to allow the congregations which built the facilities to have any benefit after generations of sacrifice, donations and volunteerism.

The Episcopal Church has been "ahead" of other mainline denominations in what some have called progressive "reforms" (re-defining marriage, gay clergy, assorted political statements).


It seems to be really working out for them.


Here's the thing, Gentle Reader.  When the sherpas are falling off the cliff up ahead of you, it's time to take the other dang fork in the road.


The sad thing is, despite the evidence to the contrary, the old mainline denominations are all saying to one another, "Gee I sure think that fork to the left is going to work one of these times..."

Shrieking and Doom are overrated.