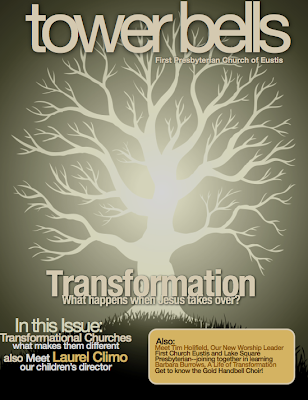 This article appeared in the Summer Issue of the quarterly magazine that I edit for my church.  Since most of the people reading my blog probably won't get to see said article, and since I thought it was kind of a good one, I reprinted it here.  I can do this, I actually wrote the first one!

In his book Transformational Church, Ed Setzer writes about two principles that he discovered after surveying and studying churches that were “gleams of light in the shadows” among the vast majority of churches that are “struggling to make a transformational impact on people and communities.”

These two principles are what Setzer calls “incredibly biblical ideas.”  The first “Incredibly Biblical Idea” is simply Transformation.  Setzer declares that Transformation is what happens when “God gets hold of an everyday person...Every thought and action begins to change.  Values and attitudes change.  And people notice.  They change from living to self to dying to self.”

Interestingly, this process doesn’t just happen to individuals---it can (and should) happen to an entire congregation or a faith community.  When a congregation begins dying to itself and living for the sake of the world, it’s values, spirit, the entire culture begins to change.  And when people enter into that kind of culture, they begin to experience a similar transformation.  This is why sometimes people will visit a church, and describe it afterward as “alive” or “dead.”  Based on the culture and the energy of the individuals within the congregation a visitor to a church can quite literally “feel” the vibe of transformation radiating off of the members and regulars.

The second “Incredibly Biblical Idea” that Setzer brings up is The Local Church.  He writes, “I believe in the church because of her Lord.  It is the gathering of transformed people to hear the gospel, worship, and then scatter to participate in God’s mission.”  He goes on to write, “The Church is God’s chosen instrument to spread the gospel.  It is His people engaged in His mission to carry His message into their culture and every culture.”

Then Setzer says something powerful: “The local church is not an antiquated idea but a necessity in our day.”

First, transformation is when God gets hold of your life and you begin to change your approach to the way you actually  do life---according to Jesus’ way, which means that you die to yourself and live for others.  And when a bunch of dedicated Christ-followers who do life together in a church get transformed, the whole place gets transformed as a result.

Second, the local church isn’t just a nice idea.  It’s not a comfortable place to spend a Sunday morning.  It’s not a service, civic, or social organization.  It’s a radical community of people who are convinced that Jesus has called them not just to sit around and remark on how beautiful their empty buildings are, but to actually go outside into their neighborhood and show the world what Jesus is like.

Interestingly, when these two “Incredibly Biblical Ideas” are both alive and well and guiding a congregation, that particular congregation, according to Ed Setzer, flourishes, grows, thrives and is a testimony to the resurrection of Jesus Christ.

May your local congregation strive to be that kind of church.  May it seek transformation through the power of the living Word of God, and then continually seek to be a transformational community.